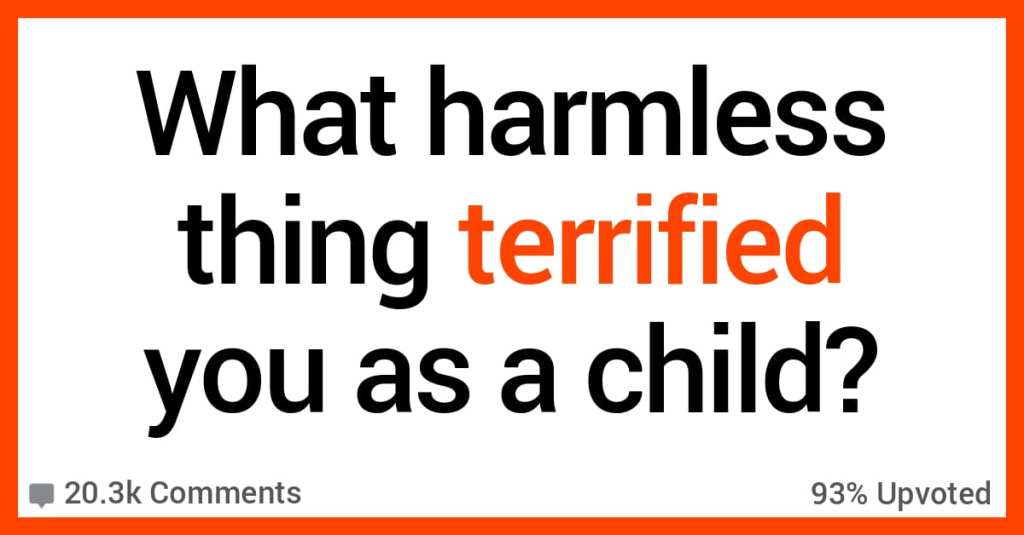 People Admit the Harmless Things That Scared Them as Children

I’ll admit it, I was a pretty scared kid.

And one of the things that REALLY terrified me was the dentist. I dreaded when my Mom told me I’d be going to the dentist the following week. That meant a whole week of not sleeping, worrying, and having nightmares about that appointment.

I don’t know when things changed, but now I love going to the dentist! You get those pearly whites cleaned and walk out there feeling like a million bucks!

So, basically, I eventually realized it was harmless.

Let’s dig into these stories from AskReddit users about things that scared them when they were kids.

“Sharks in the swimming pool.

Could be 3 feet deep and I was still terrified Jaws was just gonna leave only my trunks floating in the water.”

“Turn off the lights to the basement and then running up the stairs.”

“The concept of eternity.

I was raised Christian and was terrified of the idea of spending forever in either heaven or hell.

“I know this sounds odd, but water heaters, boiler tanks, etc. in cellars and basements. I have no idea why.

They looked like monsters to me when I was little.”

Like the people that dress up in those costumes that are fuzzy and have giant heads? TERRIFIED me. Literally I would crawl up my dad and bawl my eyes out.

One time at an amusement park a guy dressed up as yogi bear kept coming towards me despite my terrified screams, and my dad almost had to kick yogi bears *ss. True story.

6. Too many horror flicks.

“Could not sleep with my closet door open.

I saw way too many movies with scary things in the closet, so I figured a shut door guaranteed my safety.

“My three biggest fears as a small child:

Or really any mascot that included a stylized person with glasses but no eyes to be found behind the glasses.

Freaked me tf out!”

“As a kid, I was afraid of a sniper shooting me through the window.

I was afraid they would be able to see me through the gap on the window shade that allowed a thin band of sunlight into my room during the day.

I used to tape my window shades to the sides of the actual window to close the crack.”

“Getting on and off escalators.

I thought I’d slip getting on and scrape myself on the edge and need stitches.

Or get my shoelace stuck at the bottom and trip and need stitches.

“Talking to adults, especially cashiers.
I begged my mom for ice cream once when I was about 6, sitting at McDonalds. She said Sure! I got all excited. Then she handed me a $5 bill and told me to go get it. I think that was my first ever panic attack.

Instead of the monster under the bed, I thought that a million ladybugs would come out from under my bed in a wave when I came back from the bathroom at night.

I also thought they would crawl up the wall my bed was against unless I was looking at it.”

Poor things, they are the most “minding my own business” “harming no one” creatures that decorate the streets with their squished guts and it made me so sad seeing it. but they still terrify me.

I’d find them just chilling in bathroom n I’d need to scream for my dad so he can gently pick them up and put them in the garden.”

I watched the Thriller video and was convinced that staring up at a full moon would turn me into a werewolf.”

15. I remember those things.

“The rubber chicken that had an egg in water when you squeezed it.

I always thought it would hatch one day and the baby chicken would eat me so I took it outside and tied it to the garage door.

What scared you as a kid? Talk to us in the comments!