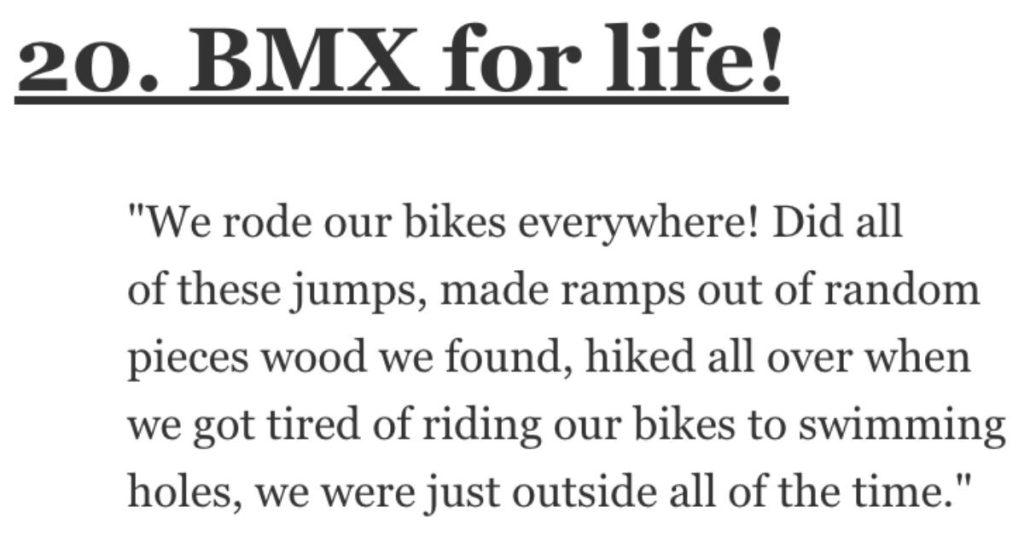 Hey, young folks…sorry, but I’m here to burst your bubble.

Growing up WITHOUT the Internet was actually totally awesome.

My friends and I rode our bikes, played sports, ran through the woods, and basically created our own fun every day after school and on the weekends.

The only thing you had to make sure you did was be home for dinner.

It was a glorious time!

But, of course, the Internet is pretty nice, too…

People on AskReddit talked about how they used to spend their time before the Internet was invented.

“We had a woods in our neighborhood.

I would just hang out in the woods with the neighborhood kids building a fort, playing army or follow the dog, my friend had a dog but it was really all of ours.

Follow the dog was basically we’d let Spotty lead us around for hours. Hard to believe Spotty passed away 18 years ago.”

“Ride the bike around until you saw a group of your friends or their bikes at a park, woods, house, beach, etc.”

“I was born in 1980 and we didn’t have Internet until I was a teenager.

I spent a lot of time playing outside with my brother since there were no other kids around. Some stuff we would do:

Go out in the woods and climb trees

Whittle sticks (we had pocket knives as young kids)

Sit in the treehouse and read, pretend that it was a fort and we had to defend it from attacking monsters, etc.

Go swimming in the creek

Have sword fights with sticks

Catch and pet toads, turtles, lizards, crawdads, etc. We let them go after.

Play with our ninja turtle figures

Jump on the trampoline

Play music on the radio and dance/sing along

Catch fireflies in a jar. We let them go after.

It was a really different time.”

“Playing with friends outside and dreaming up worlds that could never exist. Internet and video games made us think – well, now we can live in all of those worlds! They exist now! Not true.

Every person has a unique perspective and equally unique fantasies, hopes, and dreams. So even though we found more worlds to play in post-internet, they were never our own.

Today’s world is all about instant gratification and I miss that anticipation.”

7. Let’s have a conversation.

“Wondering about stuff. You know those conversations where someone’s like, “I wonder which actor has won the most awards for being in war movies?” and then someone Googles it and everyone goes “Huh. Neat.” and moves on?

It didn’t used to be like that. It used to be a long conversation over which actor it probably was because you couldn’t just look it up.”

“One of my favorite things that I remembered recently was we used go play night games.

It was pretty much a bunch of people from local high schools, about half in cars and half on foot. There was a starting location and an ending location. People on foot would try to get to the end location without getting caught by the people in cars.

It was one of the funnest things from high school. And yes, I’m from a small town.”

“I read books non-stop. My dad took us to the library every Saturday.

“Lots of time on the phone talking about nothing important.

And, yes, my friends and I used to write letters to each other. Handwritten letters. Some were so heavy they took two stamps. I even had a penpal in Ireland.

Life was so fun.”

“Playing sports outside every day and inside at night watching the best cartoons.

Or playing mulitplayer videogames with your friends in the same room because online mulitplayer didn’t exist.”

“As a youth, we played a lot of pickup games with no helicopter parents or any intention of being serious about it.

No college scholarship ambitions or professionally licensed uniforms. Just a bunch of kids, a piece of land, and whatever ball we had available.

When I think back, it felt like there was more time. I didn’t feel pressured to be hyper productive 24/7. I remember having time to simply enjoy life and friends.”

“Spent time outside, books, writing, puzzles, talking on the phone, video games, cutting pictures out of magazines to hang on my wall (I just threw myself way back).

Music/making CDs, legos, cartoons, going to the mall, bikes, walk around neighborhood, hanging out at the roller rink or bowling alley.”

“”In my day” we did “WWF re-enactments” on my friend’s trampoline.

Me, him and his brothers would try and create our own Royal Rumble which resulted in a lot of injuries as the trampoline didn’t have pads and you’d fall off a lot anyway.

Then there were the static electricity shocks you’d get all the time.”

“Actually enjoying your friends company and just having cool conversations.

There are so many teens I see now with their phone in their hand just ignoring the people they’re with.”

“Lived life with real conversations, made it places on time, had a map of the neighborhood in your mind, enjoyed summer, ran around, climbed trees, rode bikes to explore the great beyond that went beyond current map…

I’d go back to that time, it was simpler and talking to people, especially older people brought on knowledge which was previously lived by them in their time.”

“I had a bush in my front yard that was the perfect cockpit to a space fighter ship. 2 people could fit in the front as pilots and 2 more can fit in back as gunners

We were always ready to take on evil in our battle ship, but when we had to make repairs, we just brought it to my backyard to our other bush, which acted as our HQ and also could transform into a giant robot if needed.”

19. Always something to do.

Physically visited people a lot too – there were frequent gatherings with friends and family (a big family helps).

There was sort of always some work to do around the place.

I don’t know, things were a lot less… instant. Time went by and we didn’t feel bored quickly.”

“We rode our bikes everywhere!

Did all of these jumps, made ramps out of random pieces wood we found, hiked all over when we got tired of riding our bikes to swimming holes, we were just outside all of the time with our friends!

We were doing whatever popped into our heads at any given moment. It was fun times.”

Most holidays you would eat breakfast, hop on your bike and be out with your mates all day just doing stuff (surfing, soccer, play D&D (BattleTech), ride around etc) and then be home for dinner.

Mum would know vaguely where I was. This was also before mobile phones so you made plans before or used the landline.

Some TV, but we only had 4 stations back then and they had this annoying habit of putting on new shows in the 8.30pm time slot and over the weeks they would slip to 9.30 then to 10.30 and the stop halfway through the season. Too bad if you were enjoying it….

Did a lot of reading and borrowing books. Going to record and CD stores, comic stores, book stores spending hours reading and listening to music.

I would never swap any of those memories or life experiences.”

“I vandalized train cars with tags, read books, and hung out at the arcade at the mall on weekends.

I had Boomer parents who never paid any attention to me and got away with way too much.”

“When I was a kid, we were outside all day.

I was a latchkey kid so it was just me and my sister out doing stuff till my mom got home in the evening. Then Simpsons, Unsolved Mysteries, and Fresh Prince after dinner and a book at bed.

When I was a teen, it was driving around to hang out with friends. Or if no one was around, going to the cafe for coffee bc someone was bound to show up and sit with us and we’d all talk for hours.

We would drive up to Colorado (right across the border) and hang out all day up there at the river with friends or just walk around downtown and talk. You’d go to a friends house and they had just got the new whatever album and you’d both just sit there and actually listen to it.

It was very social (real, not virtual), there was an enormous amount of time spent outside, and personal time was very introspective and well, personal. I’m really glad I grew up without internet. It was kind of great.

“I used to read constantly. A book a week, at least.

Now I really have a hard time sitting down and reading.

My attention span is just NOT what it used to be.”

Do you remember what you did with your time before the Internet existed?