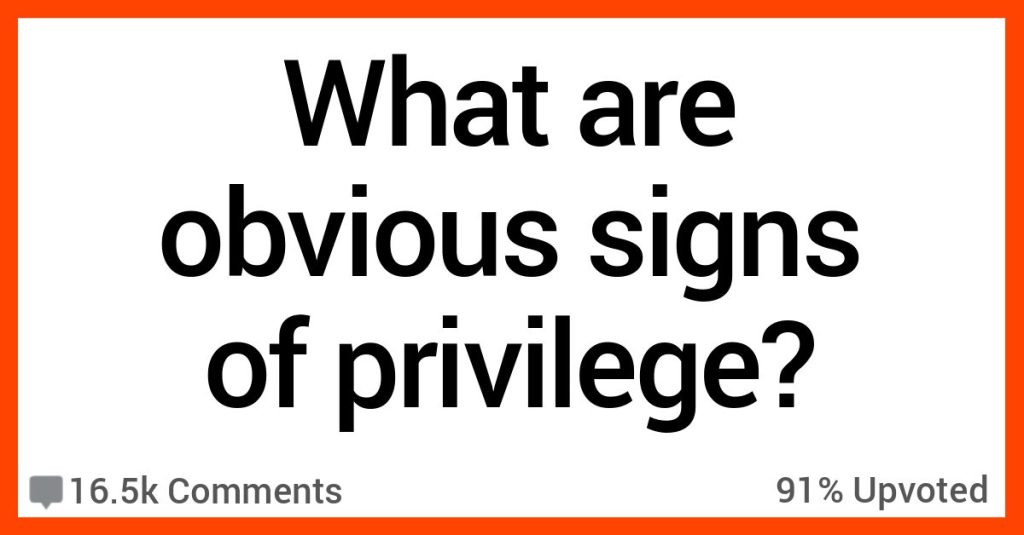 People Discuss Things They Think Are Big Signs of Privilege

When we talk about privilege in society, we’re not talking about having a lot more than the people next door or not having to work for the things you have – we’re talking about the daily things in our lives that we never have to question that others do.

If you’re not sure what this might mean in reality, here are some suggestions of everyday things that are for the privileged only.

1. A certain kind of childhood.

Having a house, or having parents who love & support you, or a ‘childhood home’ to visit.

I had this until I lost my mom to cancer a couple of years ago. I’m in my 20’s. Dad remarried and moved to a different house.

I still can’t believe how perfect it all was before the cancer.

Being able to just quit a job you don’t like.

3. Not pinching every penny.

The ability to buy a drink or snack outside on the spur of the moment, without thinking about how it would impact your ability to pay for utilities/rent/groceries/essentials.

Adding to that — a stable and safe home life. Now that I’m an adult, I realized how lucky I was to have parents who were good and loving but also prioritized a safe, stable, calm home environment. They actually thought about creating a warm safe environment, and I didn’t know that was a thing you had to consciously do until I got to adulthood.

They never fought in front of us, rarely lost their tempers with us, stuck to a routine and structure to where there were always hot meals, clean clothes, a clean home — and they let us have our own space to just relax and decompress. I noticed in my teen years that certain friends always wanted to come to my house to hang out which I thought was weird because my house was kinda boring — but now looking back I can see that they liked the safe calm atmosphere at my house and wanted to some come relax. My parents consciously chose to make our home a safe retreat from the world and I’m so grateful.

I’ve met so many people over the years who never had the ability to relax at home (ranging from just really active schedules where they were shuffled from activity to activity and rest and relaxation wasn’t prioritized, to people who had really turbulent abusive homes) and now as adults they have a really hard time relaxing or cultivating a recharging atmosphere at home.

I literally had to lay out some steps for my friend of things you can do to make your home more comfortable and relaxing because they just… didn’t know how to do it.

5. Especially in this day and age.

Whenever there is a major thunderstorm in my area, I always think “please don’t let the power go out.”

6. Libraries are for everyone.

I think a lot of people who have access to a public library don’t appreciate how much of a privilege that is.

That’s why I always loved volunteering at my library and encouraging those to come to our programs because without the programs we put on a lot of those kids wouldn’t have a lot of things to do during their summers.

8. Being able to go with the flow.

Spontaneity in your daily plans. If you’re a wheelchair user that’s virtually impossible.

So few places have accessible restrooms, some public transport needs contact 24 hours in advance in order to accommodate you, the list goes on.

I envy people who can just go with the flow.

9. We take this for granted.

Also the abundance of food in western super markets is quite frankly insane.

Every day I try and spend a moment to reflect on how lucky I am.

Clean drinking water. From the tap. In the house.

I don’t mean digital privacy, I mean a room with solid walls and a door that closes.

Lots of people don’t have that.

11. And having someone care about it.

One of the worst parts of chronic illness is knowing that this is how things are always going to be, that it only gets worse from here.

The ability to actually be a kid when young. It’s heartbreaking how many children have to grow up / are hardened before they even hit puberty.

Feeling safe in your own home. Not worrying about rats, mice, roaches, bed bugs, bricks being thrown through windows, violence outside, break ins.

I had bed bugs once. It was awful. Yeah they don’t do any physical harm unless you’re allergic but they have a massive effect on you mentally. You never feel like you’re not being eaten in your sleep. I can’t see the bedroom the same way anymore. I can’t relax in my own bed.

Stable electricity – the kind that doesn’t shoot lightbulbs out of their sockets.

Stocked shelves in the supermarket.

It’s going to be crazy one day.

To have people around who can and will help.

This has impacted me in so many ways.

I didn’t qualify for enough in student loans/government assistance because it was just assumed my parents were giving me hundreds a month in assistance, so that imaginary amount was deducted from my benefits.

I’m glad therapy is becoming less stigmatized, but the “everyone should go to therapy” crowd acts like it’s free.

I am a therapist and the more common thought that everyone should go to therapy to get “fixed” is just insane. Therapy is not for everyone, and there are so many different types and approaches to therapy,its not a catch all solution.

I have seen more and more “I don’t really wanna be here but my (insert person in life) told me I should. You’re going to get as much out of therapy as you put into it.

18. Don’t take your toilet for granted.

Being able to flush your own waste without another thought or going when you need to is a big one. Sometimes I think about how terrible it’d be to have to encounter that shit you took the other day in the road (like in a slum with no plumbing) and I can’t.

There people who poop in plastic bags and fling the bags outside (I read that they’re called ‘flying toilets’ in Zimbabwe). Or having to go out in the elements in the middle of the night.

I’ve heard women are more vulnerable to assault in areas where they have to go out in the fields. They’ll wait until dark/dusk for privacy but it’s more dangerous.

So many people go hungry for a variety of reasons from the food just isn’t there to drought to lack of money.

If there was an embargo and food could not get to the stores, there would be a HUGE freakout. For those who deal with it all the time, not a big deal.

I was watching a Nat Geo documentary and these people in Madagascar have to get water from these (baobab) trees, which basically act as water towers. During droughts, they’re empty inside and they have to ration water.

In the documentary, they’re wearing Nike and Adidas, all the clothes that are made for the losing teams in the Super Bowl and whatnot and praying because they had a good rice harvest.

I’ve had a breakdown because the store was out of something I needed and, watching this documentary, I truly realized how incredibly privileged I really was, in and out of America.

Being able to just replace anything that breaks.

Having people assume you are telling the truth.

If I call out sick from my current job, my boss says, “okay, feel better!” At Toxic Old Job, I’d get a guilt trip and the third degree. TOJ also had us on timers for every single activity because they did not believe we would do our work without them. We were also forced to come into the office on Saturdays because they didn’t believe we could handle working from home.

No matter what you did or how well you performed, they always believed you were lying to get out of work somehow. It was stressful trying to constantly prove myself and manage their paranoia.

23. It costs money, and you have to have access.

Learning how to swim. Still surprises me lots of people never knew how to swim, which is basic skill for most. It may save your life someday.

Having a garbage truck that picks up your trash and being able flush toilet paper.

Having your own room to sleep in, stable internet connection or access at all, and new non-hand-me-down clothes.

Knowing a fire truck is on its way when there is a fire. Having a public library.

Criticizing your own government.

“Hi mom, hi dad, thanks for coming to my 40th birthday”

Being able-bodied. So many people are one accident away from being unemployed and don’t realize that. Your job will ruin your body – be aware and fight it.

Having a heated home.

My mom grew up in a tobacco sharecropping family and said said as a girl she wanted a house where all the rooms had heat and they didn’t have packed dirt floors.

It’s weird to think about, isn’t it? I wish everyone had the basic necessities of life (and also great parents).

What would you add to this list? Drop it in the comments!