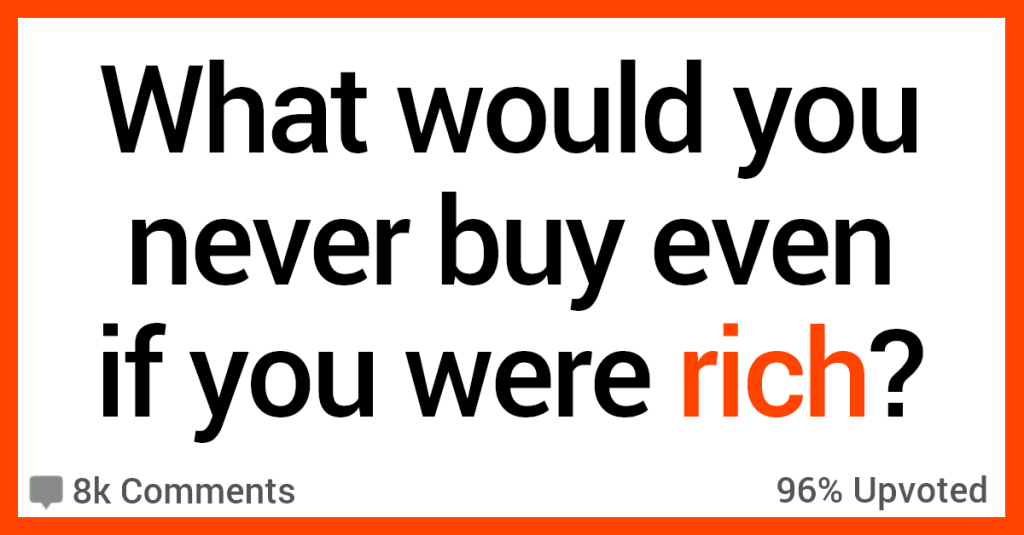 People Reveal the Things They’d Never Buy at Any Price

I don’t think there’s a single person on earth who hasn’t sat around and fantasized about what they’d do if they were rich.

Except, I guess, people who are born rich.

But even our fantasies likely have limits, don’t you think?

What is something you still wouldn’t buy even if you got rich one day? from AskReddit

Here are a few things the people of Reddit wouldn’t buy at any price.

A man asks the bartender where the bathroom is. “First door on the left”, he says.

The man is so drunk he takes the door on the right instead.

He sees before him a beautiful GOLDEN Toilet! He does his business and goes home.

He returns the next day and asks the bartender about the golden toilet.

The barman then exclaimed ” Oh, you must be the a**hole who s**t in my tuba”!

I managed to get quite a few awards on a comment some months ago that came w premium privileges, used the coins within the week to not have to think about them anymore and then promptly forgot about the whole ordeal…

My parents used to go with my grandfather to the Parade of Homes every year, since my grandfather knew seemingly everyone within the home building and development industries.

My mom to this day talks about how annoying it was that, while touring these new homes, my grandfather would point out things like skylights as being impossible to clean correctly, or unusual light fixtures as being tedious to dust or change bulbs on, or any of a number of things that might look striking but served little function.

Apparently after my grandfather died, my parents went to the Parade the next year…and my dad took the mantle of pointing out these types of details.

I like the brand, and own some scarves and jewellery. But being on a wait list and having to buy a number of other items while trying to curry favour with a sales associate and “earn” the opportunity to spend 15,000+ on a handbag? NFW.

I don’t even like either style regardless of the surrounding nonsense. Never understood why anyone would f**king bother.

You can literally charter then for a fraction of the price and you don’t have to worry about the overwhelming indirect costs that come with it.

F**k even First Class is more than enough.

I would never tell this to the myriad of my friends who have them- but I personally think they look AWFUL.

I don’t think they look good on anyone.

why own a yacht when you can rent one with a whole crew for a “day out” and not have to worry about maintenance/dock fees for the rest of the year.

It just seems like a ridiculous hassle to me, regardless of finances.

It’s funny that autographs originated as a way to prove or commemorate that you met a person.

And at some point people just started buying them.

Like yeah, Babe Ruth has interesting handwriting but that’s not really what I appreciate about that guy.

I live next to a wealthier part of town and the stuff that kids are wearing to high school is mind boggling.

There’s nothing special about it and I quite frankly don’t see the point in wasting money on brand items similar to that, even if I was wealthy.

I cannot imagine buying a purse that costs that much money.

I don’t care who you are and how much money you have: buy a normal handbag and donate the money you saved to the food bank.

I used to be absolutely crazy over anything Chevy, until the gov’t handed a few automakers, including Chevrolet, over $8 billion doll hairs. And what did they do? Came back greater than ever! With $60,000 pick up trucks and a slew of bulls**t engineered vehicles they knew would fail within 100k miles.

On the other hand you have a company like Toyota, who make pretty much the most reliable vehicles in the history of the industry with reasonable prices and a vehicle option for literally every class of automobile you could think of.

The Big Three is no more and they should be ashamed of the idea they created with needing to buy a new car every few years because of their engineered failures.

I should mention that Ford never took a dime from Uncle Sam and I’m probably incorrect about half of the s**t I just typed, but f**k Chevrolet and their rich man s**t boxes.

No BMWs(never liked the look), fancy watch (can tell time on one, from any store), etc.

Cause I have already learned a while ago, that you just spending money on the name, of whatever it is. And not always, getting the quality you need from it.

I know I’ll get bored of it quickly and I’ve heard similar stories before.

I just want a vessel to fish out of, be it a canoe or a yacht with a bathroom, kitchen, bedroom, and tv.

I don’t care. I just wanna go out on the water and relax. And it looks hard to fish out of a jet ski.

Nobody ever watches out for those.

Before the hurricane hit, there was a wreck where someone got hit because someone else ran a red light.

The poor man on the motorcycle didn’t stand a chance.

Well, that’s quite a look at what people wouldn’t buy even if they had a TON of money… but what do you think?