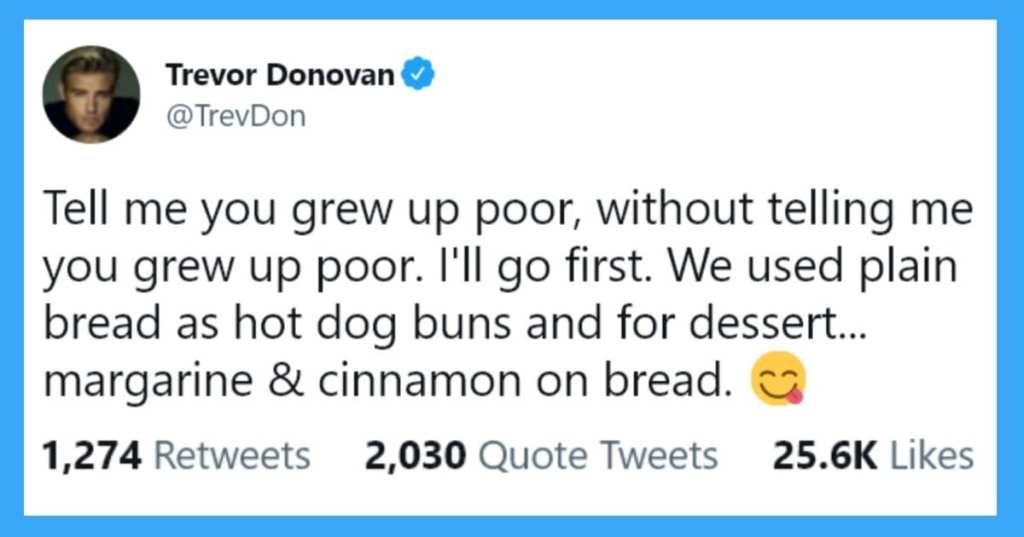 You probably don’t need me to tell you that it’s not easy growing up poor. Especially if you grew up poor.

My family’s never been wealthy but we did alright. The times when everything was the tightest, I was too young to remember now.

Nevertheless, I’ve had plenty of “broke food” experiences, which is a topic that came up a lot after prolific TV actor Trevor Donovan started this thread:

So, what were we all chowing down on when there was nothing to go around? Twitter tells all.

Have you ever had a sugar sandwich? Because I have. ?

Check out that price stamp. Half a buck. Dang.

I don’t know what kind of land you’re ruling, sire, but it definitely isn’t Flavor Town.

This was the cereal I ate because it was approved by WIC… Very nasty ? pic.twitter.com/jzdtG2wLVX

7. The flexibility of bread

Plain bread was hot dog, hamburger buns, garlic bread and yes, cinnamon toast. Our house was so cold my mom would turn the oven on and lay our clothes on the hot door to warm them up. It was country poor, I didn’t know I was poor ?

2 meals a day were beans and rice and we skipped the third all while the foster parents ate chicken and steak as did their kid.
To this day I can’t stomach the thought of beans and rice

Dude, broke or not, that’s a delicious fart treat right there.

I feel like there are better containers for this but ok.

Who doesn’t love Kool Aid though?

Seems like you had a good childhood. We ate (S.O.S.) shit on a single 2-3 times a week.
Ingredients : a couple of slices of Carl Budding processed meat (paper thin) on 1 slice of white bread + flour gravy on top. Kool Aid was drink of choice. pic.twitter.com/yQYaq3pNOc

Even adult me who isn’t destitute is lookin’ at that like a fine meal.

We got creative with hotdogs and Kraft Easy Mac. pic.twitter.com/35uvmAsZeu

Everything is better grilled.

The only cheese we could get was the government commodities cheese ? ( which made delicious grilled cheese sandwiches ?? BTW ) and the peanut butter that came with the commodities made yummy cookies pic.twitter.com/cnG7KXvn2x