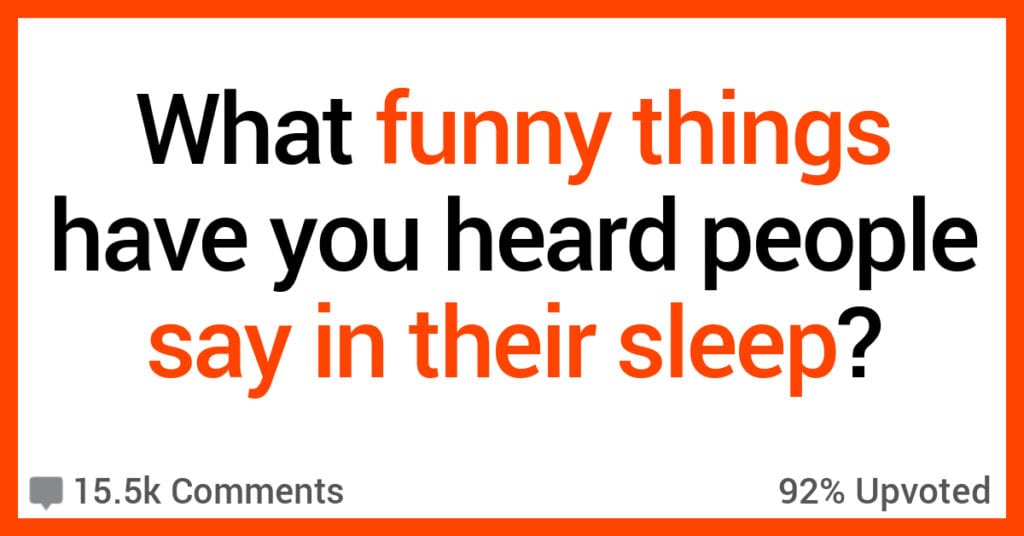 I was at a sleepover once in sixth grade and there was one kid who kept us up all night.

It was because he talked in his sleep. ALL NIGHT LONG. And the rest of us just had to take it and suffer.

What’s the funniest thing you’ve seen people do or say in their sleep?

“My wife was mumbling a lot and suddenly shouted “DONKEY KICK!” as she kicked me in my shin, so that was fun.”

“He got up, went into the kitchen and ate one bite of a mini pecan pie – no fork, just a straight bite – then apparently remembered he hates pecan pie and left it stacked neatly on the little box.

Another time he sat up and stared straight ahead at the wall, didn’t respond to me asking what was wrong. He stood up, walked into the wall, then stood there like he was contemplating the barrier.

He just backed up exactly as he came, sat down and swung back into bed like nothing happened. That was creepy.”

“My boyfriend had his tonsils removed a while back, so he was on some pain-reducing drugs that kept him sedated and, in his words, made him “a f*cking dumb*ss.”

He had a conversation in his sleep with me about how I shouldn’t trust leprechauns, because they conned him out of gold coins by giving him foil-wrapped chocolate coins instead.

Also, he said not to trust Irish people, because they were honorary leprechauns.”

“Not my partner, but my younger brother and I used to share a room and used bunkbeds.

One night I heard him mumble, “I don’t create the weather, I just predict it.””

“My husband once sat bolt upright on bed an announced, “You’re not working hard enough. I have to fire you” and went back to sleep.”

“One o’clock in the morning I got a phone call from my friend in the next street.

My 6 year old daughter had just knocked on her door and then walked in mumbling about not being able to do her sums!

I raced up there and walked home with her, put her back to bed and she didn’t wake up or remember a thing the next day.By the next night our house was like Fort Knox!!!”

“He started shouting that he couldn’t feel his left arm.

He said ok and started snoring. It took me another hour to get back to sleep. He didn’t wake up at all.”

“My boyfriend once blurted out “you’re putting BREAD in my ears” in his sleep, mumbled something unintelligible and then followed up with “and i’m becoming a SANDWICH”.

It still makes me laugh when I remember.”

“Roommate freshman year of college was a sleepwalker/sleeptalker. We were in the freshman dorms, small little room.

I woke up one night and saw him sitting straight up on the side of the bed just staring at me (eyes fully open) just talking gibberish about golf. He was going on about Phil Mickelson or some sh*t. Have to be honest, it was creepy as all hell because he was staring directly into my eyes.

Next morning, I told him about it and he just laughed and said, “sorry, I tend to do that from time to time.””

“In military training and school I often took the night shift for guard duty.

The amount of sleepwalkers and talkers is way f*cking higher than I expected. It is straight creepy when you have to walk down the halls with a covered flashlight listening to big-*ss grown men mumbling and lashing out in their sleep.

What takes the cake though is often sleepwalkers will just kinda stop randomly. So you’ll be walking along in the pitch-black darkness and suddenly there is just a f*cking dude standing there. Eyes generally closed, or worse… open, just kinda listing to the side or leaning against a bedpost or wall.

After I’d suppress all the swear words I was about to yell out; nothing much to do but kinda prod them along back to their bed. For all the randomness that is being part of the military, I really didn’t expect one of my jobs to be gently tucking my fellow soldiers back into their beds.”

He also once punched me in the middle of my spine while fully asleep. When he woke up he claims in his dream he was giving him mum CPR…

He sometimes also suffers from night terrors. It happened often when we first started dating (almost every time he slept or napped) but it hasn’t happened for probably over a year.

It happened like two nights ago where he just started screaming like a banshee in his sleep. It was wild and terrifying.”

What’s the funniest thing you’ve seen someone do in their sleep?