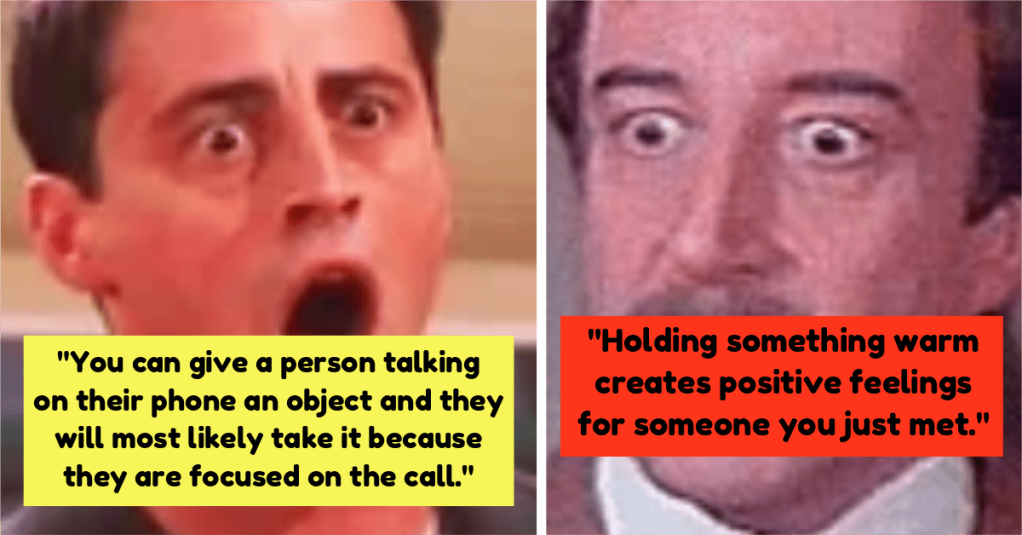 When I was a teenager, I introduced a friend of mine to the extremely iffy “science” of Neuro Linguistic Programming, and then watched to my horror as it turned him into a pickup artist.

I learned my lesson.

Psychological “tricks” should be handled responsibly, and never used for evil.

What was the very first psychological trick you learned that blew your mind? from AskReddit

With what great responsibility will these great powers come, Reddit? Let’s learn the dark arts.

You can give a person talking on their phone an object and they will most likely take it because they are focused on the call.

I regularly hand people empty plates, most of the time they just keep talking and don’t notice what I’m doing.

If you want to be involved in any work environment, or feel like an insider during work, you gotta greet everyone you meet right away. If you missed them, turn around, go back, and say something like “sorry, I didn’t catch your name. I’m ____.” If you don’t have time, then take the next chance, even if it’s just a “hi” or a wave.

People will see you as assertive and approachable. It doesn’t really matter if you’re introverted and don’t speak to them for the rest of the day or whatever. It k**ls most of the awkwardness associated with being social with people you may or may not know. Plus, it sets you up for healthy teamwork

Getting through a job interview, when I first graduated I really struggled, had a couple of rejections and picked up a self help book.

The first tip was just smile. They already think you’re qualified, the interview is to check you’re going to fit in.

I didn’t have time to read any further so I felt completely unprepared. The entire interview was all jokes and laughter and I got the job. It was for a creative role so most of these kinds of jobs don’t do any weird testing or have any formal questioning or metrics.

Whatever you’re scared of doing is only going to last two seconds. Then you’ll blink and it will be months later and you’ll wonder why you were even worried.

I figured this out in 8th grade before a presentation I was TERRIFIED of giving, and I think of that moment every time I’m nervous to do something and now I’m 28!

Time flies. No point of worrying about it.

The fastest way to get the information you want isn’t to ask, it’s make an incorrect statement.

People can’t help but correct others.

By walking with your head and eyes forward like you’re deliberately going somewhere, people will move out of your way.

I first tried this in a crowded mall when I was 14 and was blown away.

Always meet someone at a coffee shop.

Wew lad nothing eats away at your enemies like that. Short, sweet, simple, and confident does the trick. You could get into a massive argument for hours, fight, cuss, spit, punch, kick. Nothing will really burn them at the core quite as much as being nice to them.

I believe it is a psychological trick because they usually don’t expect it. They know you’re enemies, and it throws them into a loop and off-guard.

I bumped into my old boss recently. He had absolutely royally screwed me over before I quit, stabbed me square in the back to protect his own hide. I gave him this huge smile, said “Hey [name], good to see you!”

He gave a weird frown and returned “Hi… Uh… How have you been?”

“Better than ever! How about you?”

“Uh… Fine.” He made an obvious effort to keep walking and avoid a conversation.

I bumped into him again before I left the place we were at and gave him a nod, nice smile, and the “three finger wave” sort of like a salute. His face said it all… I h**e that guy, why is he happy?

9. The Illusion of Choice

Give young kids the illusion they are making a decision to do something that you really want them to do.

Kid won’t eat their carrots and wants dessert now? You say to them do you want to eat your carrots first and then dessert? Or would you like to save your dessert for tomorrow and eat your carrots now?

When walking through a crowd don’t look at the People in front of you.

Instead look past them where you are trying to go and most people will make room without noticing it.

My first workplace trick that I still use regularly: people will procrastinate with their own work, but drop everything to quickly “correct” someone else’s work.

Example: Bill needs to provide a paragraph of text to go in your company’s brochure. He’s been dragging his feet forever and it’s the last thing you’re waiting on but he keeps putting it off. Go to where his paragraph should be and write a sh**ty version of what he’s supposed to do. Don’t invest more than ten seconds. “We do widget services. We are good at it. Our services are good for your widget needs.”

Send it to Bill saying “hey I filled in the last paragraph about widget services; can you check and make sure it meets your criteria, and I’ll send it along to the boss for approval?” You’ll have Bill’s polished, fully composed text in about ten minutes.

Working as a waitress, if I noticed a customer was getting particularly impatient and it looked like they were going to be rude to me when I went over, when I would take the food over and before they got the chance to speak I’d say something like ‘So sorry for the wait, thanks for being so lovely about it!’

It seemed to catch them off guard and paint them as the ‘nice guy’ in my eyes, and more often than not their expression would change from p**sed off to surprised, then they’d say something like ‘oh no problem it’s okay’ so they could keep being the nice guy and feel good about themselves and I avoid a chewing out.

If you want to get more information out of someone, just let them speak. There are times in a conversation that things stop. Most people want to fill this themselves, but don’t. Let the other person do it.

This is especially useful if you think the person and their story is full of s**t.

14. Door in the Face Technique

Basically someone who would have said no to a certain request if you asked it initially, is more likely to say yes to that request if you FIRST ask for something so big that you KNOW they’ll say no, and then the thing you actually want seems reasonable by comparison when you ask it afterward

If you feel like something is a really big chore or you just can’t get yourself to get up and go do something, minimize it to a small insignificant part.

Instead of doing all the garden work, say you’re just going to take the tools out so when you want to work you can.

90% of the time once you’re up and doing the small thing, the big bad chore doesn’t seem so bad now and you end up doing it.

If you ask someone to move over to an arbitrary different location to talk (could be 5 feet away) they are much more likely to listen to you and follow instructions.

(One of my tricks as an elementary school teacher.)

I taught teenagers in a really tough London school. A colleague taught me a brilliant trick to get a kid to calm down when they were angry:

Look them calmly in the eye and say “what do you want to happen next?”

Most of the time they were so caught up in emotion they hadn’t thought about the consequences of their d**kery. As soon as you prod them to think about consequences, most of them would calm down straight away.

Talking myself to sleep.

I’ll think things like, “my bed is sooooo comfortable. Sleeping is soooo easy. I love sleeping. Sleeping is great.” Instead of agonizing over why I can’t sleep.

Positively reinforcing myself is my new lullaby lmao

When you want/need something from someone, ask them for help with it.

People are more likely to believe something you tell them if it’s self depreciating.

You can make up some sort of lie but if you add something negative about yourself in it it sounds more believable.

21. Eat Away the Tension

I don’t remember the specifics but if there’s a tense situation between you and another person, eat something.

Seeing you eat, something that people/animals only do when they’re relaxed and feeling unthreatened, will essentially mentally cue yourself AND the other person to relax a little more.

Don’t know how true it is but it makes sense!

At a garage sale my father wanted $5 for a desk.

It sat all day.

Eventually he wrote $10, and $20 above the $5 and crossed them out making it look like he’d dropped the price twice.

It was gone in under 30 minutes.

I’ve had customers that I see get short with other cashiers when they ask them this, I then ask them my way whenever I’m cashiering and they’re completely civil about it. I almost always get from these same people, “no thanks not today.”

I guess some people view this questions as nuisance because in their mind they feel like they’re asked this every time at a lot of stores.

Thanks to Dilbert-man Scott Adams, I learned the Wally Reflector at a young age.

It’s very simple. If someone tries to pawn their work off on you, ask them to do something for you first related to said task. 9 times out of 10 they’ll leave and try to find someone else.

“Hey can you finish this report for me? I’m going on vacation and want to leave a little early to beat traffic to the airport.”

“Sure, I’d love to help! But, could you possibly send me a quick email with a bullet point list of what needs to be in the report, just so I don’t miss anything?”

If someone insults you, either own it or pretend you don’t understand.

They can’t get you on something you admit to and if they have to explain it, it loses all its impact.

Smile as soon as you first see people (you want to like you) as you greet them, like hey buddy how you doin ?!

And look genuinely happy to see them… don’t matter whether its girls, guys, young, old.. it’ll make them excited to see you like every time i don’t get it but there’s psychology to it and it actually changed my life

Don’t know what to say but want to keep the conversation going?

Repeat the last phrase of the last thing the person said as a question.

Eg: As a question?

Yes. As a question. Raise your voice so it’s clear that you want them to go on.

I’ve given myself this rule where i will internally count down from whatever number and when i hit zero i have to do the thing or else.

example: in the shower, depressed, letting the water run over me. i don’t wanna get out but I’m wasting water.

i do this for lots of things

To avoid Canadian standoffs when you and another person are walking towards each other in a hallway, square up your shoulders and tilt your head in the direction you plan on going.

Tell someone to quickly pick a number between 1-10.

The number 7 is picked an overwhelming amount of the time. I don’t know why.

The tricks are laid before you. Use them wisely.

What tips do you have?