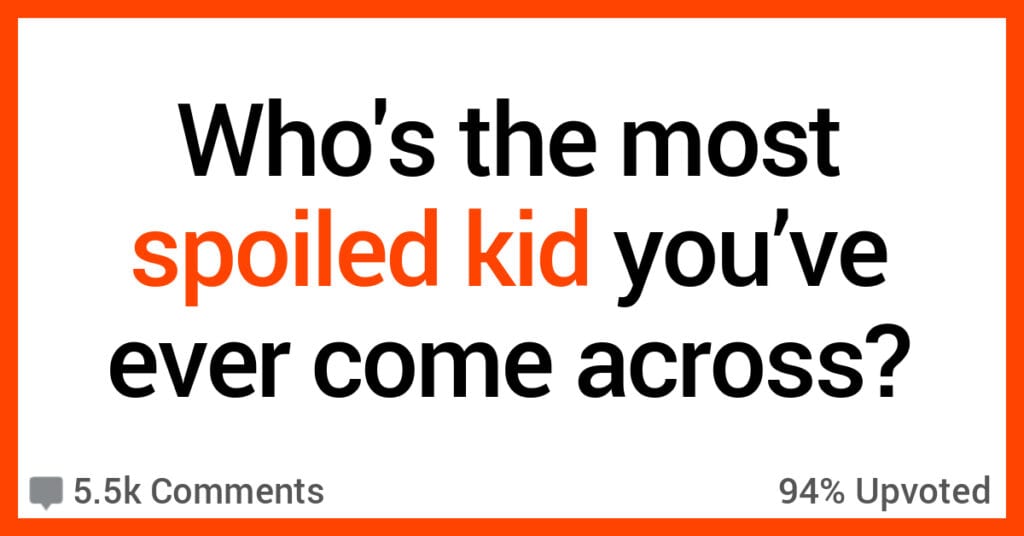 Spoiled kids are EVERYWHERE! Don’t believe me? Just go out in public and take a look around.

The kids are running the show these days, ladies and gents.

“Kid at my high school.

When he was 14 he had a learner’s permit but his parents got him a Mercedes-Benz G-Class. Everyday he drove it to school and he was determined to park it in the parking lot to show it off.

So he had his housekeeper drive to school with him and her son drove a car behind her to take her back home (which was only about 2 miles away from our school).”

“I gave my nephew some books and he said “Oh man are you kidding me?” and threw them on the floor.”

“My friend’s ten-year-old son is a brat, and always getting sent to his room for one thing or another.

The other day, I peeked in to the kid’s room. Laptop, desktop, TV, and three game systems.

Oh my God, what a horrible punishment. Amnesty International is going to write letters about this.”

“I worked at a chocolate shop where we made milkshakes. This lady walked in with 2 spoiled brats. They ordered one milkshake of the classic flavor and the other “birthday cake” flavor. Well, being a tiny store with only 1 blender, I made the classic one first so that I could make the birthday cake without rinsing the blender in between.

So the boy got the classic flavor and the girl got the birthday cake one, but as soon as I gave Boy his milkshake, Girl started screaming because she wanted to get hers first. To make up for that, I put some sprinkles on top of the whip cream (we only had a little bit of sprinkles left, so I’d been saving them). When I gave her the milkshake, she took a sip and then started crying again because the cup was “too big.”

The mom asks me to give her a smaller cup and I’m like sure whatever, and I give her a tiny cup we use to make hot chocolate. Well then the girl starts screaming that she wants whipped cream on top (in pouring the milkshake out, the whipped cream was ruined). I comply and top off the cup with whipped cream.

Well now she’s crying again because she wants more sprinkles on top of the whipped cream. At this point I’m getting SUPER ticked off. I had used the last of them to top off her drink. So I said to the mom, “sorry, I’m actually all out of sprinkles” and then looked straight at the little girl and said sternly “but if you don’t stop whining right now I’m going to have to ask you to leave. We have a ‘no-whining’ policy in this chocolate shop.”

Well THAT was apparently a mistake because the mom was furious that I tried punishing her spoiled brat, lol. After snapping at me for not talking to her daughter that way, she goes “we’re leaving. Give me a lid.” Well, the tiny little cup I had given her to pour the milkshake into was literally too small for a lid. I apologized and said that I didn’t have lids for that cup size. The girl SCREAMS and says “IF I DON’T HAVE A LID I’LL SPILL” and then proceeds to dump the cup of milkshake onto her lap to prove a point…”

“I used to baby sit these kids. The one girl didn’t feel like doing her homework, so I told her we only have a couple problems left and I had been helping her, so it was gonna go by quickly, and we could play games as soon as she was done.

In response, she told me she wished I was dead (this girl was 6 years old), threw a bunch of crackers on the floor, kicked her dog in the nuts, and said she was going to blame it all on me and get me fired. Of course, her parents didn’t believe I threw food on the floor and assaulted their dog, but there was absolutely no repercussions for what she did.

They just turned their heads, put their hands on their hips and were like, “what did we say about lying?”

And that was it.”

6. I need another one

“A girl in my grade broke or lost her phone six times in the past year and her parents replaced every single one.

The last time she broke it (like two months ago), she complained because she got an iPhone 6S instead of the new one.”

“I was a camp counselor for a while… had a granddaughter of the man who owns Torké coffee one week.

I don’t know how materially spoiled she was, but I was baffled that the kid could not understand that having a rich grandpa does not entitle her to get to use the only working teether ball, alone, because she demanded it.

I had to have a ten minute conversation with her during playground time about how, at camp, everyone are equals.

Thankfully she was fine the rest of the week!”

“Have a billionaire customer with 4 kids, all of them pretty spoiled but the youngest once said to me spitefully “we’re going on Tiger next week and you’re not allowed to come.”

(Tiger is the name of their yacht in southern Italy) It’s not just that he’s spoiled that gets to me, it’s the fact he knows it and rubs it in.”

“Going to high school with the son of the owner of a large TV company.

He thought he should be allowed to sit alone in the classroom surrounded by unfilled desks.

I had the “privilege” of sitting in front of him and was constantly harassed with attacks from his ruler and pens if he thought I was even remotely leaning back. “

“My husband and I moved to a new city and spent a lot of time with his gal pal from high school. She had a toddler son who was absolutely atrocious and without mental disability. She threatened him with punishment all of the time for his behavior but never followed through. We would often meet her for dinner where he would throw a tantrum, and she’d say, “If you keep acting like that, we’re leaving.” He kept acting up but she never left with him.

She had him with a live-in partner who is Cuban and grew up with a “Cuban boys should be treated like Gods” mentality. One time we saw her get upset with the kid for throwing a toy at her head, only to see the kid’s dad yell at her, “No! You shouldn’t have given him that toy! Now YOU apologize to HIM!” The kid was in a stroller until he was 5 because he couldn’t be trusted not to run off into traffic when they were out in public.

The last time we hung out with them, we went mini-golfing. Each time one of us hit our ball, he would snatch it and throw it across the course. I wised up to this and immediately went to pick up my ball for safekeeping after I hit it. As I was picking it up, he tried to grab it out of my hand and fell over lightly. He laid on the ground, pounding his fists and crying. His parents looked at me like I was the a**hole. We ended up limiting our time with them as a result of the kid’s bad behavior.”