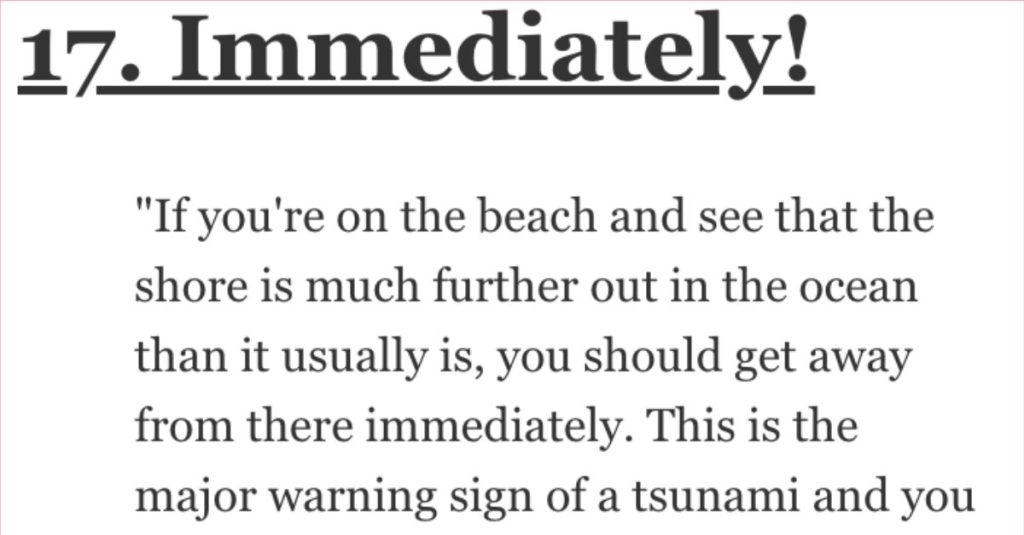 You have to always pay attention to what nature is telling you!

I guess that can be complicated if you don’t know what you’re looking for, but it’s absolutely true…because nature has a way of knowing when something bad might be right around the corner.

People on AskReddit talked about warnings from nature that might just save your life.

“If major colonies of ants are coming out of the ground, an earthquake is coming in several hours.”

“Surprised the flash flood sign hasn’t been posted yet.

If you’re walking near water and if turns dirty and dirty with debris in it, get to high ground.”

If they are fleeing you know things just got serious.”

I don’t know if this is common in other countries, but here in Australia we have what’s called “widowmakers”.

Basically eucalyptus trees are extremely flammable and its possible for the tree to be on fire internally, but not visible on the outside, and can literally explode at any given moment.”

“If a tornado looks like it’s not moving, chances are that it is either coming right at you, or it’s moving away from you.

Always assume it’s coming towards you and seek shelter right away.”

“If a bee keeps “head butting” you and annoying you, alter course.

They are warning you that you’re getting too close to the nest.”

If you see teeth or an open mouth, it’s usually a warning or sign of aggression.”

“If you see multiple d**d fish in a body of water where people don’t fish, don’t go in the water.

It likely has high bacteria or is polluted.”

“If there are tall clouds nearby, and you get a metallic taste or hear any buzzing, feel static-y, lightning it about to hit pretty much exactly where you are.”

If you feel like something is wrong, there is a good chance it is. In your peripheral you may have seen something or gotten a vibe from someone that made your hair stand. Don’t just dismiss the feeling.

Our subconscious is very attuned to hostile body language in people capable of v**lence.”

“Squirrels will sometimes watch you from a distance while making alarm calls. The sound varies by species but it’s generally a sort of squawking bark.

If you hear them barking, and they aren’t yelling at you, then there may be something else around they think is a predator. It’s worth paying attention.”

“If you are at swimming at the beach or a coastal inlet & see an unusually calm area of water, get away from it, it could be a riptide.

On that note. If you get stuck in a rip, don’t swim against it, you will tire & drown, swim parallel to the coast till you swim out of the rip.”

“If you’re hiking and suddenly smell something very musky, almost reminiscent of a faint country manure, keep your eyes open.

I was hiking on the Appalachian Trail today, up in Maryland. The wind shifted and the smell changed to something like I described above. Caught me off guard, but I kept hiking. About a quarter mile later, I turned around and began to head to my car since I was already 6 miles into a 2.5 mile hike.

Right around where the smell changed, I heard a sudden crashing sound and saw a black bear just busting it’s way away from the trail into the woods.

I had walked past it, and then came back upon it when I turned around.”

“During “stormy weather” in the Midwest…If the sky turns greenish and the pressure bottoms out, it’s time to head for the basement.”

“If you are in a canyon, slot or otherwise, and you see clouds anywhere in the sky GTFO.

It could be raining miles away and cause a flash flood in less than 10 minutes as water rushes through the canyon.

Get to higher ground.”

“If something, especially in the ocean, is very pretty or colorful or very ugly and doesn’t run away from you, it’s probably very venomous.”

“If you’re on the beach and see that the shore is much further out in the ocean than it usually is, you should get away from there immediately.

This is the  major warning sign of a tsunami and you can see this in video tapes of the great tsunami in 2004.

But people weren’t leaving, they rather tried to figure out where the water went.

I once also heard a story about a girl who went to holidays with her parents to a region which was hit by the tsunami and a few weeks before the vacation she learned about tsunamis at school, so she noticed what was happening and she rescued her family.”

“Do not go wading in water that is heading toward a cliff! Also known as a waterfall. The current is much stronger than you might think.

I am only here thanks to a handy bush as my father as a teenager was almost swept to his d**th in Yosemite.”

“For novice campers, be able to recognize what d**d standing trees look like – and don’t camp near them.

A couple of campers are k**led every year by trees falling on them during the night. Usually during storms.

There was one near our campsite last year, so I took it down. So if you’re in a park with regulations not to cut trees down d**d ones are the exception.”

“My hair literally stood on end, including arm hair. Pulse went way up.

I hit the deck face first in the shrubs and the ground around me exploded in thunder and lightening impact.

“If you have come across a small bare area under a tree, and bark is missing from the tree, you’ve probably stumbled upon a bears summer bed.

Also dont use bear bells in places that is also cougar country. You are basically ringing the dinner bell.”

“Pets like dogs or even cats can often tell if there if there is something wrong with a person.

If you notice your dog is constantly sniffing, touching, or just gravitating to a certain part of your body, you should get it checked out.”

“If you’re eating plants out in the woods, and it tastes like almonds, SPIT IT OUT.

It’s very likely to be poisonous. Only eat what you know is safe.”

“If you’re ever in a forest or mountain area and all goes quiet; birds stop chirping, bugs stop buzzing, leaves stop rustling… you are either:

A) Being stalked by a mountain lion and about to become his lunch so say your prayers.

B) About to be kidnapped by Bigfoot who will make you strip and fold up your bright red shirt and place it nicely on a rock next to your shoes; then shuffle you away to an alternate realm where the fairies will decide whether or not you should return to your homeland after they feed you a nice home cooked meal.

If this happens run but I’m not sure that will actually help. Worth a try though.”

“If you are outside in winter and you suddenly get really warm DO NOT take your clothes off.

You are about to d** to hypothermia.

You need warmth as fast as possible.”

“If you are swimming in a river and the starts turning dark (brown, muddy) and you started seeing a lot of trash (tree branches, leaves) GTFO of the water.

Those are usually the signs of flash flood.”

“If are ever out and about and you suddenly get a bad feeling or a feeling that you should stop doing something or do something different LISTEN TO THAT FEELING.

Those are your instincts talking to you, we have over 100,000+ years of evolution we spent developing survival instincts.

What are some more little-known warnings from nature we need to pay attention to?