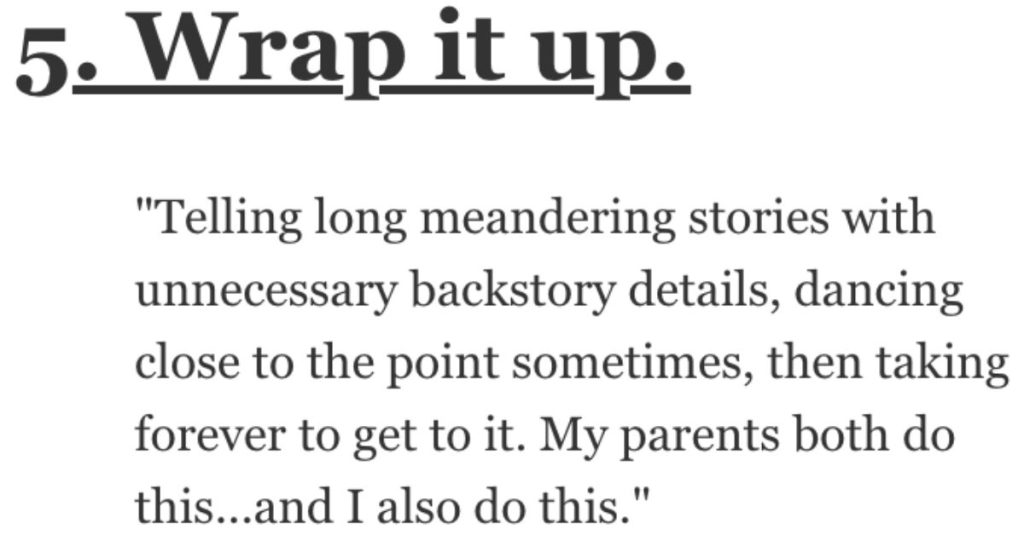 Most of us do this…

We get aggravated by things and then we go ahead and do them ourselves.

I guess we could technically call ourselves hypocrites…but I don’t want to insult anyone…or myself.

AskReddit users spoke up about this.

But when I was a teen during the muscle car days, you could hear me coming from a mile away.”

“Not being a good/attentive friend.

Sometimes I just genuinely don’t feel like talking or being around my friends for a few weeks or maybe even a month, but I still try to let people know I’m alive and that I care so they don’t worry.

Its the friends that don’t ask you to hang out, but are hanging out with other people, and not texting you back just so you know they’re alive, that bother me.

And then on the off chance you see them, they unload all these problems on you about their life, but don’t ask how you’re doing… like I texted you because I needed to know you were okay and also I NEEDED YOU, but now that you need ME you’ll communicate?

I try not to do that when I go awol for awhile. If something really interesting or somewhat dramatic happened in my life while I was “gone” I’ll be like listen to this! But I won’t be like, “here’s this emotional problem I’m having and how can you help?” When I haven’t even bothered to answer a “hey how are you I miss you” text.”

I drum so I do it all the time compulsively but when I hear other do it it really annoys me.

I try not to do it in front of other people though, I’m working on it.”

I ask myself “how can you get that big? Just stop eating so much” all the while I’m a very rotund person. I stuff my face with “delicious” foods not caring about calories or nutrients.

And I have the nerve to judge people.”

“Telling long meandering stories with unnecessary backstory details, dancing close to the point sometimes, then taking forever to get to it.

My parents both do this…

And I also do this.

Mom: “Last May, I was talking to your Aunt Patty about swimming at the lake when we were kids. That’s where you went as a kid for summer camp, remember? There was that girl you were friends with when you were seven years old and her parents came over for barbecue and…”

Mom: “So it turns out that Uncle John didn’t have to drive all the way to San Diego because he could just mail me the money!”

“Interrupting / talking out of turn.

I think it’s genetics in my family.

Everyone talks over one another….Unlike everyone else, I’m working on it.”

“I have a bad habit of interrupting people when they’re talking.

I never do it intentionally mind you but sometimes I can get over excited about a topic and my brain just kind of goes on a rampage.

I hate that others do it but I have in no doubt posted something just to receive likes and feel a bit better about myself.”

“Using the phone while driving.

Because obviously you are going to crash, while I am a god-like driving genius who will never crash.”

I snore like a freight train, and my wife usually doesn’t.

No idea how she can sleep through it, but it doesn’t bother her.

If anything, it puts her to sleep.”

“Pedestrians really bother me even though I’m often one of them.

I INSTANTLY become a hypocrite when I get behind the wheel.

Why is there traffic right NOW, d*mmit!”

Any, and all eating sounds make me want to commit a war crime.

But I’m almost 100% sure that I make the exact same noises when I’m eating.”

“Being overly self deprecating.

When other people do it it’s untrue and they need to stop but when I do it its warranted and I’m just being honest.

I usually end up catching myself and trying to frame my complaints in a more positive light and that helps, but I am still way guilty of it.”

I do it so much I forget that I do it.

I get worried that people see my do it and I really want to stop but it’s the only way I can get my thoughts out.”

“Chasing someone who is not into you.

I’m doing right now and hate it so much.

“Denying I made a mistake even though I know I did.

I catch myself most of the time, but every once in a while I wont give in no matter what and will just change the subject.”

“Being an annoying SciFi fan.

I really, truly, try and keep all my TV shows/movie theories in my head, or at least relevant to a topic or convo, but I just love my nerd s**t.”

21. Not gonna make it tonight…

“Not fully listening to someone. I can’t wait to have my opinion or story heard. I’m trying hard to minimize this.

I understand it’s a human trait but I’m working hard on allowing people to finish so that I actually listen instead of just hearing them.”

“Not standing up for what you believe in because of fear of confrontation.

There were so many times I brushed off homophobic comments as a bis**ual girl that I shouldn’t have but I was just avoiding arguments.

It irritates me so much.”

What drives you nuts that you do, too.