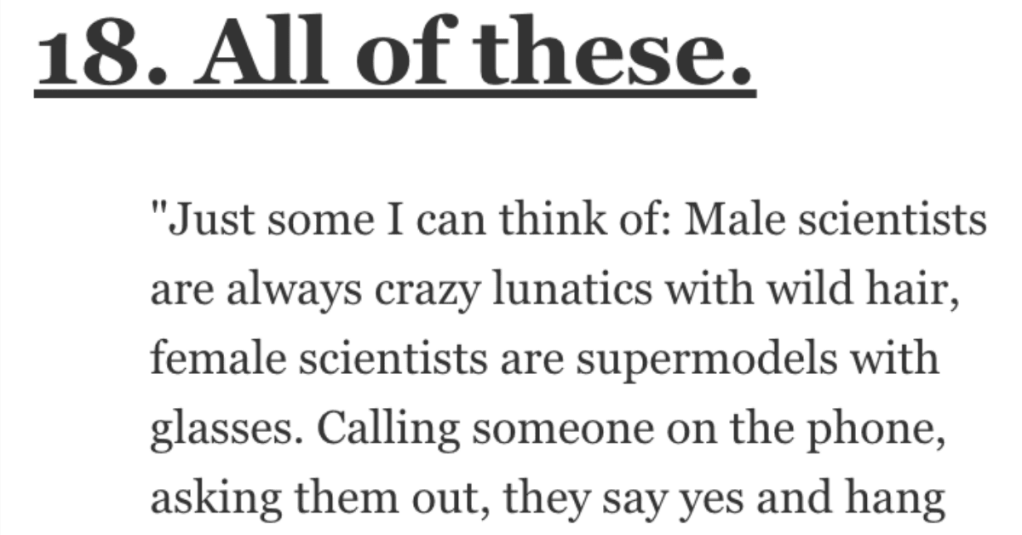 People Share What Happens in Movies That Drives Them Nuts

Do you want to know what drives me crazy about movies?

When they throw in a romantic storyline for no reason whatsoever.

I’m aware that many films need a love story and it’s an important part of the plot, but other movies just seem to throw a romantic subplot in there to take up time…or something like that.

“In romantic comedies, the two love interests are usually bad for each other.

So, to make them seem less bad for each other, when they go through that period where they break up and try dating other people, the other people are the weirdest, most unlovable freaks anyone has ever laid eyes on. Men are instantly abusive, women behave like spoiled children.

“Over explain the plot.

Usually accompanied by flashbacks you just saw ‘live’ minutes ago.”

“I dont know, lets check on the news…”

“If you are just joining us, here is the plot wrap up of the thing that the heroes need to know”

4. You’re not convincing me.

“They hold supposedly full coffee cups like they are empty, always holding them at a tilt.

I know they are just stage props but they can at least act like there is coffee in their cups.”

Of all the hundreds if not thousands of cars I’ve been in across my lifetime, I have met precisely zero people who stow their car keys this way.”

“When two people want to talk privately, instead of them going into the hallway, they make the other 20 people leave the room.”

“When some thing is foreshadowed and then revealed later in the movie, but instead of just letting you realize it yourself, one of the characters say it out loud. Like the audience is too dumb to make the connection.

Biggest pet peeve is the fact that EVERY comedy has to turn sad in a very cliche way halfway through the movie. It’s the guy loses girl and has to win her back formula that’s in every damn comedy.”

“After someone gets s**t in the chest, they always stand up, and triumphantly remove their jacket to reveal the bullet proof vest.”

“When the FBI shows up to “take over” the case and then the cops butt heads with them.

This does not happen.

Cops are more than happy to let someone else do their work for them.”

When a part of the plot is in a different country than the movie itself is from and they show a regional/cultural aspect of the visited country and fail.

Don’t they have Google?”

“I have noticed in movies that involve a new house, it is often a “surprise” for all but the member of the family that apparently acquired or purchased it without any input from the rest of the family. Did the one person just buy it online or sneak away and just go through the purchase process and closing?

The family pulls up to the house, dad gets out and says, “let’s see the new house”, kids go run and pick their rooms and partner has never seen the house before. Why is this? It seems completely unrealistic and it bugs me every time.”

“I’ve noticed this a lot more lately, the fact that horror movies are super dark.

And I don’t mean dark plot-wise, I mean dark in the sense that I can’t see what the f**k is going on.

I get that horror is creepier at night but how can I be scared when I can’t see what’s happening on the screen?”

“That EVERY sh**ty movie nowadays is set up as the first part of a possible trilogy.

So what ends up happening is the first movie is non-committal and vague as a result.

“Male lead and female lead with no chemistry end up together “just because”.

“When they use dialogue to cram years of backstory into the first 3 minutes of the film.

“But honey you can’t do that since your father was an ex astronaut who d**d on a mission and now your poor grief stricken mother has early on-set Alzheimer’s and you are struggling financially and our kids both need braces and our car is being repossessed and we now have to move to a small apartment because you lost your job at the tuna canning factory that your brother got you just before he d**d in 9/11”.”

“The FBI is almost always portrayed as a bunch of overly bureaucratic sh**heads who suck at “fighting crime” and only know how to follow their standard procedure.

The original D** Hard is probably the most on the nose with this, to the point a central part of the plot revolves around the villain actually counting on this behavior.”

“The antagonist is often someone who is straight out evil and just likes to watch the world burn for no particular reason.

At the end right before they are defeated, they often act as if they’ve suddenly understood how horrible they were and regret everything they’ve done.”

Calling someone on the phone, asking them out, they say yes and hang up without ever discussing the time and place, yet still coming at the same time at some restauraunt/bar

Having a bite for breakfast and running out to work/school.”

19. Not doing their research.

“They don’t do their research on anything. Laws, medical facts, technology, mechanical objects, conversation, and normal human behavior.

It’s a little bit mind blowing that the highest paid actors in the world can’t do a convincing portrayal of an ordinary person.”

“Main character getting knocked out cold with a hit to the head by the butt of a g**, and then waking up in another area with no concussion or other physical consequences.

It’s such a lazy piece of screenwriting.”

“When they end the phone call without saying goodbye.

They just hang up and the person on the other end completely understands that the conversation is over.”

“Hire significantly older actors to play young people’s or even teenagers parts like the actresses for Jane Eyre always look to be in their twenties when she’s supposed to be a teenager.

Or the opposite, casting a middle aged actress as old. Like Kate Winslet bring only 12 years older than her grown up daughter in Mildred Pierce.”

“When they create drama by not having characters explain themselves, when they easily could have. For example, the “it’s not what it looks like” situation.

It could easily be explained away, but instead they let the other character walk away without trying to explain. That just annoys me.”

“S** scenes that are minutes long. I don’t need to hear people grunting and moaning for so long, put in some seconds and then SKIP TO NEXT SCENE.

It makes me super uncomfortable and I really don’t get the point.”

25. Things are getting serious.

“A desperate-feeling guy enters the bathroom… turns on the faucet…splashes water on his face, then stares at himself in the mirror…water still running…”

“Insert romance when it’s not critical to the storyline and/or irrelevant to the genre.

I avoid romance movies for a reason!

Stop showing up in my sci fi thrillers.”

“Any bar scene when someone just says “i’ll have a beer” or “two beers” – and the bartender wordlessly knows what they want.

Like, you could at least say give me the lager, or the porter or something like that.”

“I hate when there is a character who speaks another language, like Spanish, and every few lines, they have to throw in a Spanish word or sentence, only to translate it into English immediately after for the person they are speaking to.

We get it. They speak Spanish.”

Are there certain things that happen in a lot of movies that drive you crazy?