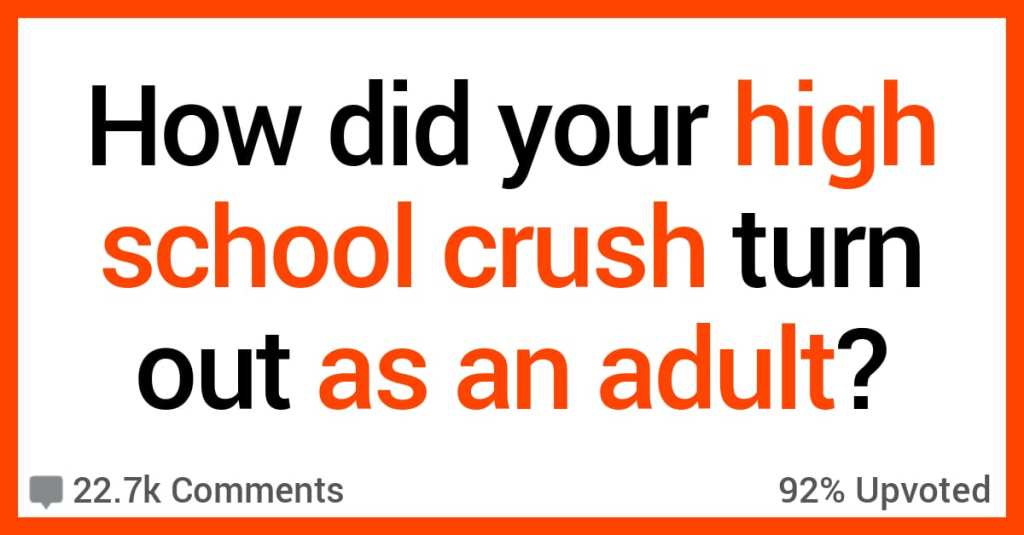 She was hot, funny, cool…and way out of my league.

And I never found out what became of her, because she doesn’t have any social media accounts. Who knows, maybe our paths will cross one day…

But these folks do know what happened to the people they loved back in the day!

AskReddit users talked about what became of their school crushes…let’s take a look.

“Back when I was younger and crushing hard I got on AOL instant messenger and had gotten my crush’s screen name from a friend.

I worked up the nerve to start a conversation with him and soon after some awkward small talk he sent me a message in Comic Sans, black background, red lettering, and in French. I then went to google for translation and found out he had just called me a pig, in French. Being a seemingly awkward and chubby teenager, I was literally crushed.

The heartbreak was only made worse by remembering that a few weeks prior I had selected to take French class the next year and couldn’t change it.

Years later now that I’ve blossomed he follows me on every social media platform, has reached out a couple of times to try and flirt/hang out.

I believe he’s moved away and is a teacher now.”

Died of breast cancer at 34.

“Ended up committing suic*de a few years after high school.

She was a teacher and got caught having an affair with a female student.”

“I never made a move in high school.

About 7 years after graduating, I saw her on social media and said what the hell and asked her out.

We’ve been dating for about 2 years and I’m about to pop the big question!”

“Hot douche who doesn’t really do much except go to the gym.

To be fair, that’s how he was in high school, I just liked it back then.”

One of them is still a close friend, and he became a primary care doctor. He also officiated my wedding.

I have no idea what happened to another one. We didn’t really have overlapping friend groups and she doesn’t do social media.

One of them is a math professor now, so that’s pretty cool.

My BIGGEST crush in high school was my longtime neighbor, but it also fizzled out pretty quickly after we went to homecoming together. We’re still good friends, and our families still keep in touch.

He’s also the guy who introduced me to my husband.”

“There was a girl I really admired for a while, she didn’t really give me the time of day after freshman year though.

She was co-valedictorian and hugged me as I crossed the stage at graduation, and no one else got one. I’m still really confused about that 6 years later.

She went on to med school and is either married or at least engaged to a guy she met there. Overall she’s doing really well, and I’m happy for her.”

“We reconnected through Facebook when we were in our late 40s and now she is my wife.

I’m sure she kept on as the amazing, kind person she is. She moved to another country, speaks multiple languages and is more successful than I imagined.

She seems happy but we haven’t talked since the time I told her how I felt about her about 20 years ago.”

“Went on to be a teenage model for hair products, graduated from Yale, toured Europe, opened her own successful ceramics company that is sold worldwide and is often written up in magazines.

Makes me feel like sh*t every time I think of her.”

“You made me check and she is actually a very successful artist and an art teacher at a renowned university in France.

She even got decorated for her work (Chevalier des arts et des lettres).”

“She ended up dating and marrying the guy who bullied me all through middle school and high school.

They seem like a functional family from what I see on social media.”

“One of them is homeless and a druggie. It’s very sad.

The other one is famous in his home country, is a best selling author, and is regularly on tv.

Don’t have a crush on him anymore, but I’m glad we are still friends, and I’m happy for how well he’s done.

I guess they balance one another out…”

“She was aware then, over 30 years ago, but it was unrequited.

We’ve been in casual contact through Facebook for the past several years, and once before that my wife (at the time) and I had her and her husband over for dinner.

From what I can tell, she’s grown into a person I probably would have been happy with. It’s nice to see my high school perspective got a few things right. I think we’d be good friends if we lived closer.

She appears to be living a good life with her husband and family. With my second wife, I’m happier than I could have ever imagined.

What ever happened to your high school crush?