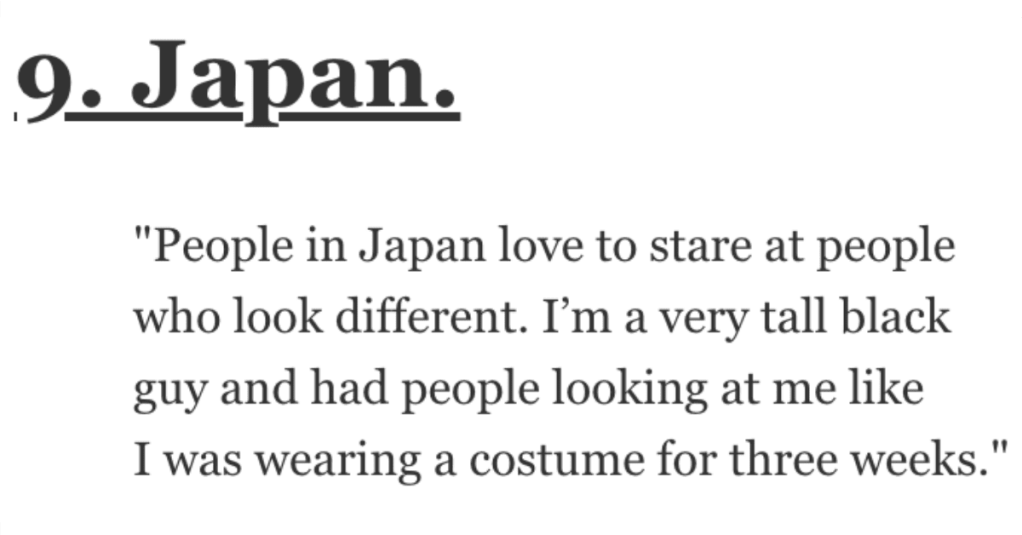 I traveled a lot when I was younger and I think the country that felt the most “different” to me was Russia.

I was there for 10 days when I was 25-years-old and it was definitely an eye-opener.

But I’m positive that there are tons of other places on the planet that would really shock me if I went there. I’m guessing China, India, Africa, etc.

Have you ever experienced a big culture shock in another country?

“Been living in Jakarta, Indonesia for almost 2 years now.

Its a beautiful city and it has amazing and glorious skyscrapers, yet on the other side of the city, you see slums in a dirty environment thats filled with a huge population living in poverty, with houses that seems like its about to collapse at any moment.

I knew slums and such existed but I never knew how terrible they actually were.”

Compared to the German suburb I grew up it, it basically felt like a wasteland, without any playgrounds, cafés, restaurants, parks, doctors, pharmacists or anything beside other houses.

It felt like a prison because you can either stay at home or you need a car.”

That was a huge culture shock. The amount of homeless people and rich people living side by side.

Really reminded me of other third world countries. And a lot of it is manmade.”

“The entire Haitian district of Paris was a culture shock because of how unlike the rest of Paris it was.

They had open air markets put together with scrap, and our guide said that most of them were illegal but they had runners that would let vendors know if the police were coming.

He also said not to take too many photographs, especially of people because they DO NOT appreciate that.

That said, I didn’t hate it. It had lots of personality and was totally distinct from the rest of my trip, very memorable.”

“I was working in Shanghai. Decided to get McDonald’s breakfast.

A cute girl sat next to me and started loudly chewing with her mouth open. Seriously, I thought she was messing with me.

Turns out that’s how everyone in China eats.”

“Middle of town in Amsterdam.

Outdoor urinals with no walls.

You just lean against them with people walking by.”

“I’m from New Hampshire and spent a couple of years in Oklahoma for work. Christianity is such an ever-present part of life there. People bring up God in ordinary conversation.

When I checked out a local rodeo event, they kicked it off with a prayer. I don’t think I can convey how weird it was, since this relies so much on personal experience.”

“My first time leaving American was to India, I was alone and just landed after a 22 hour flight. My body and mind felt like I was dreaming, everything was completely different.

The way people greet you, the food, the car steering wheel was on the opposite side and I would always get in the driver side when using a taxi lol the taxi person thought I was weird.

My hotel room was an experience on its own, the outlets, the constant power outage, the bathroom was a room with a toilet and a shower head on the ceiling so when you showered the entire bathroom was soaking wet, even the toilet paper. The constant honking from cars and the cows, dogs and monkeys, the loud noise was hard to get use to.

But at the same time these things were absolutely beautiful. Everyday was a celebration with some kind of festival, seeing everyone in the streets enjoying life made my soul feel renewed. The river and prayer. The walks through the jungle and seeing wildlife was my favorite part of walking to my school everyday.

I can talk about India all day, it was amazing and shocking all at the same time.”

“People in Japan love to stare at people who look different.

I’m a very tall black guy and had people looking at me like I was wearing a costume for three weeks.”

“People in Germany actually expect every one to be punctual and respect deadlines.

It was so weird to me, when at my first party there, my friends were so shocked that I arrived one hour later than planned.

Whereas I was used to the fact that when “the party starts at 7PM”… It means it doesn’t start until 8:30PM.”

“I went to Salt Lake City once and it was so weird.

Mormons are really nice to outsiders, but at the same time, far-gone religious nutters, so you’re getting this lovely guide to all the best bits of the city you neither asked nor paid for, and also simultaneously being preached to.

Very odd, and also the most American that entire holiday felt.”

“I’m from the USA and for me it was lack of awareness of personal space in Argentina. Don’t get me wrong I loved it there. But people don’t care as much about personal space.

Was sitting on the end of an otherwise empty bench all by myself while waiting for a ferry. Had my bag close to me so it wasn’t taking up needless space. Some women came over and sat ON the straps of my bag.

It wasn’t a small bench. There was plenty of room. But for some reason that I will never be able to comprehend, she felt the need to sit ON my bag. I had to get up and move elsewhere.”

“I was in Myeodong, South Korea in the spring and it was raining.

The Myeongdong bus stop to the airport has no shelter, it’s just on the side of the road, but when it rains, somebody, I’m guessing the nearby store owners, leave umbrellas for the bus goers to use, which the bus goers use and leave hanging on the railing when they board the bus.

There were so many pretty umbrellas hung along the railing and nobody stole them. They were just there for anyone to use and that was a huge shock for me.”

I’m from Florida and I can tell you I was pleasantly shocked when I used my turn signal on the highway and people consistently allowed me to merge.”

There were armed soldiers at checkpoints along the highway from the airport to the resorts. Also learned that due to the huge disparity in the value of the Jamaican and American dollar resort hospitality is one of the highest earning job sectors on the island.

A single tip earned by a bartender would often surpass the daily wage of most other residents.

You were shuttled around to different pockets of beautiful beaches and lively entertainers, but if you lift your head up and took in the world around you the occasional time you left the tourist areas there was a stark contrast to how the average Jamaican lived.”

“In France the restaurants open at noon and close again at 2 until dinner time.

Everyone not a restaurant worker goes home for a 2 hour lunch.

I was a contractor in housing renovations there and in Canada before, where I would go to the Home Depot at noon or midnight because the lines were shorter. And get a mid afternoon snack.

Radical shift in scheduling a life and work combo.”

Then you go sit at a booth with a curtain in front of you and they pass your food through the curtain and then close the blinds.

Strange but not a bad experience. Just different.”

“I visited Košice in eastern Slovakia. I went for breakfast in the main square and ordered a croissant and cappuccino.

They used umbrellas to protect their skin from the sun for a 20 meter walk across a tarmac to board a plane. The umbrellas were provided by the airline and collected as people boarded the plane.

I was aware that different cultures have different ideas about darker vs more pale skin but I hadn’t witnessed that level of care before.”

“I was in Copenhagen and saw strollers outside of cafes.

This seemed normal-it’s Europe, shops are small, strollers are bulky….until I realized THERE WERE BABIES IN THEM.

Apparently, it’s totally normal to just leave your kid outside and trust that nobody is going to abduct them. The idea is the fresh air is good for the immune system.”

“I’m from India and the traffic rules here are non-existent.

I was in Norway during a student exchange and when crossing the road, cars would stop to let pedestrians cross. I always heard about it and knew that it was common abroad but when it happened to me I felt so respected ?.

It was only after a month I could let go of the reflex of seeing a car stopping. It was such a nice feeling.”

“According to my relatives who visited:

They found Americans’ polite tolerance for long slow lines and cashiers literally moving at a snail’s pace to be mind-boggling, especially given all the stereotypes of Americans being loud and pushy.”

“I entered a restaurant in Beijing in 2007, and the lobby was lined with cages and aquariums, holding various types of animals — ducks, chickens, fish, snakes, and the like.

You pointed to the animal you wanted to eat, then they took it to the kitchen, k**led it and brought it to your table for lunch.”

“When I spent a year in a small Czech town I was pleasantly surprised by the beer table service.

Instead of having to order another beer each time, you only needed to tell them when you didn’t want another beer.

“How organized, clean, disciplined and polite Japan was, compared to my native Philippines.

Looking at them side by side today, you’d think my country was the one that was hit by two nukes.”