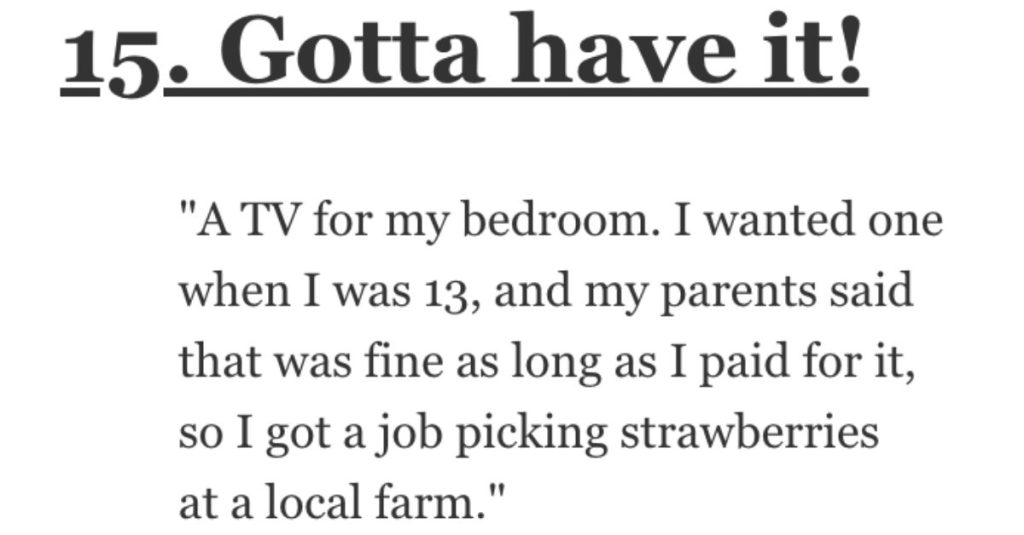 People Talk About the First Thing They Saved Money to Buy

I still remember the first thing I saved up money to buy.

I used the money I made mowing lawns to buy a pair of Air Jordans when I was thirteen.

They were so cool! And I felt like THE MAN wearing them around school knowing that I bought those kicks!

AskReddit users talked about the first thing that they worked hard for and saved up to buy.

Let’s check out their stories!

I got a part time job as a sign spinner in the the weekends in high school to pay for my homecoming and prom dresses because I knew my mom couldn’t afford them.”

I was pancake flat chested, and was bullied as a child and young adult. I was even made fun of by my own mother, frequently. That really messes with a kids head. So in my 20’s, I left my home state and moved 500 miles away.

I worked 2 jobs for 6 months straight, with 1 day off in 6 months. I scrimped and saved up enough money for surgery, and a week off for recovery.

My self esteem has improved so much, that I am literally a different person That was 25 years ago, and I haven’t regretted it for one moment”

“My dad told me to earn $3k for my first car and he would match it.

He just wanted to see me earn and save it.”

“A pair of Doc Martens.

My Indo-Canadian parents would never have bought their daughter a pair of combat-esque boots so I saved up from my tutoring job and bought my own.

“Our French class in high school was going on a field trip to Quebec, It was about $800 or so. I didn’t wanna do any of the fund raising and was 17 at the time delivering pizzas after school.

So every day I’d come in with my previous night’s worth of tips which was about $30-$70 dollars and gave it to my French teacher until I had enough.”

I’ll never get rid of it for this reason alone.”

“A 700 dollar camera. I cleaned and organized garages and sheds for months and months. Totally worth it.

Iwas about 13 or so and I’m very proud I achieved that. I will carry that mindset for the rest of my life.”

“A trip to space camp. I saw a commercial for it, copied the address, wrote to them to ask for a brochure.

Told the mailman to hold it for me until I came home from school and to not let my parents see it. Got a job at 14 and worked as many hours as they would let me. Opened a passbook savings account and saved my paychecks, my allowance from chores, my babysitting money, birthday and Christmas money for an entire year.

I even had a jar of change that I had found on the sidewalk. I saved over $1,000 and then asked my parents if I could go. They said no, it was too expensive. I handed them the passbook that said I had more than enough. They couldn’t say no and I went to space camp!

My grandmother even chipped in an extra $200 for spending money. Best 10 days of my young life! I am SUCH a nerd! “

“A TV for my bedroom.

I wanted one whe I was 13, and my parents said that was fine as long as I paid for it, so I got a job picking strawberries at a local farm.

Yes, I got my TV, but I was so sick of the sight and smell of strawberries that it was at least a year before I could even think about eating them again.”

It was $150, way too much for even a present so I saved up all my chore money for a very long time. I believe around a year. I still came up short. (I would still buy candy here and there) in the end my mom paid the rest of it.

I spent days reading that thing. I kept it for years in the end I gave it to my younger brother. I don’t know where it’s at now.”

I was super happy and proud of myself. It’s a 2012 Ford Focus Sel Hatchback, and I love it a lot.”

I worked CRAZY hours (60+ hrs/wk, 6 days a week) every Summer while I was in college to cover housing and food while I studied.

It was effort well-spent.”

It was the embodiment of freedom.”

I still have it.”

My friends liked it as well. My sister’s friends all told me it was garbage, but their parents bought them newer cars that they didn’t appreciate.”

“A mountain bike in high school.

It was kind of a big deal for me.”

“A hamster. Not just the hamster as those costed like $7, but the cage, the plastic hamster ball thing, the bedding, the treats- the works!

I named him Sam. He lived to be almost 5 years old and he was the best. My mom helped me figure out how much money food costs and I made sure I had enough money saved at the time of buying him, to be able to get him food for at least a whole year.

My mom didn’t think he’d stay alive longer than that.”

“Worked two jobs and sold plasma while in college a few years ago to take my then-girlfriend and myself to Europe.

Neither of us had ever really traveled before, and she was always worried she’d get stuck and never get a chance to see the world. Thought bringing her along was a huge waste of money for the longest time after we broke up, but she died recently and I found out she kept a box of mementos from our trip.

In hindsight I think that was probably the best money I ever spent.”

With the drums, mic, and guitar.

Only had that job for three weeks but got enough to buy it and was beyond happy.”

I grew up poor often going to school with jeans that I grew out of a year ago. They would be tight and would get like high waters while everyone else had well fitting or baggy jeans. I stood out and I got teased and bullied because of it.

When I got to high school I got a part time job and started buying some decent clothes. Jeans that fit. Decent shoes that sort of thing.

My first major purchase that actually required saving was a nice leather jacket was about $400 roughly 30 years ago which was several weeks pay.”

Absolute sh*t. No customer service. $3,000 laptop lasted about 6 months in total before it completely died. This was about 15 years ago, but I will never trust them or buy from them again.

My entire paycheck from a summer camp job went to this. The only reason I took this job was so that I could afford it.”

“When I was a kid, I saved up all my birthday money and Christmas money (never got an allowance) to buy myself the original NES (Nintendo Entertainment System).

But no one in my family thought I could do it because I’d have to save for a few years and not spend it on anything else. My mom refused to buy me a video gaming system because she didn’t want me to spend all day playing video games and said if I wanted one I’d have to buy it with my own money. I think she thought she found a loophole in telling me I had to buy it for myself.

But I did it. She kept her word though. I bought it and did play that thing forever and all day.”

Had to get in a lot of babysitting hours for that bad boy.”

When I was about 10 years old my parents and I were in our backyard clearing out a ton of weeds that had gotten out of hand. I had trouble focusing because our next door neighbor had this really adorable puppy and all I wanted to do was play with him.

We found out that they were actually going to take him to an animal shelter because their son was not taking care of him like he promised. I decided to ask my parents if maybe we could get him instead. I was an only child and never really have anyone to play with unless a friend would come over and the thought of having a puppy to play with whenever I wanted to was great.

My parents agreed and our neighbors offered to sell him to us for $20, which is really cheap for a dog when you think about it, but a lot of money for a kid. I had that saved up and immediately agreed and promised I care for him and love him forever. So, he became my puppy and like a brother. After a few days of debating I named him Snoopy.

Snoopy became my closest friend. He made me laugh, played with me, and would just hang out and watch TV with me. He was always there for me, especially through some tough times in my life where I was extremely self-destructive. He saved me from myself.

He was there at my side through tough breakups where all I ever wanted to do was lay in bed. He was an amazing friend. He was there to see me graduate 8th grade, high school, and college. I hoped he would be there on the day I got married and maybe be around for when I had kids, but unfortunately as much as we wish for things, sometimes they don’t happen.”

In the comments, tell us about the first thing that you saved up money to buy.