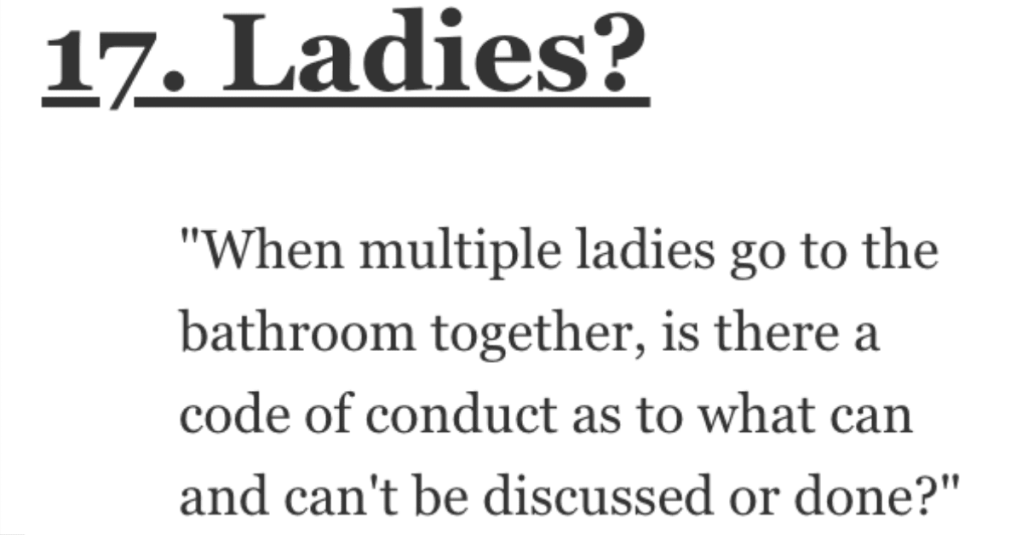 People Talk About the Inappropriate Questions They Want to Have Answered

There are some super inappropriate questions that you want answers to…

It’s okay, we all have questions like that about life!

And now we’re gonna get to the bottom of some questions that people want to get answered on AskReddit.

“I have a question to all men, from a man.

When I go to a bathroom at work, or public, I hear you in the stall next to me.

I hear you flush your toilet, buckle up, and just leave the stall.

I HEAR you not washing your hands.

Why? I wash my hands so often because having dirty hands is so disgusting.

Why are you insisting that you rub your crotch germs all over everything else you touch?

Just Why? Please tell me why.”

“We’ve all heard of the stereotype of guys with huge lifted trucks and loud exhausts having tiny d**ks and their trucks are used to “compensate” in some way.

I’m curious as to where this began and if there is enough data to actually support this.

It’s such a funny idea.”

“Is it scary losing your virginity?”

“Am I allowed to say “black” when describing a person?

Like if there are 3 people all have dark hair, dark eyes, wearing black and the only way to distinguish easy is “the black fellow over there” as in “who do I give my ticket to?”

What’s the thought process behind it?

Do they think that will work?

Does it work for some people?

I just don’t understand it.”

“Some people of Indian descent have a very distinctive smell, reminding me of cumin.

Would it be their delicious food that’s affecting their sweat? Or simply food smell stuck to their clothes/hairs?

A couple Indian coworkers (back before home office conditions) would arrive in the morning and you can smell them clearly as they pass behind you, before you see it’s them.

So I’m thinking it’s their BO that has that cumin/spicy smell to it to be so noticeable even in the morning?”

What’s the deal with the “gay accent?”

It’s very distinct, it’s usually different from the accent the person grows up with, why does it happen?

Is it a signaling habit? Is it a cultural thing?”

“If depicting the prophet Muhammad is offensive to Islam and Muslims, why is it ok to name a person Muhammad?

I’m not trying to get into a religious debate; I’m genuinely curious.”

Especially as a soldier in a war.

If it changes you, how so?

If it didn’t, how does that make you feel?”

“Do identical twins have the same d**ks?”

11. Looking for some tips

“How do you flirt? What even is it? Can you give me an example?

This might seem like a stupid question, but to me I’ve never ever attempted to flirt, but sometimes it seems like I am flirting I just don’t ever realize it until after.

I just dont get it, but I should sooner rather than later.”

“Do guys not go down on girls that often?

I go down about 90% of the time, but girls have told me that it doesn’t happen a lot.

I just always thought every guy did it. Is this on average, or just my small sample size of friends?

“What does it feel like to have a pe*is?

I’ve always been wondering about this, does it feel different under certain circumstances?

How does it feel getting an erection, and how does s*x and org**ming feel like?

And how do y’alls balls work?

Like, how do they move and act and are connected to body and pen*s? Can you tuck the pen*s under the balls, and if yes, how?”

“How much TP do you use?

I realize it differs depending on what has come out.

But I feel like I use a lot compared to others.”

“I wonder if nutting in zero gravity feels different than on earth.

I guess thats my really inappropriate question for the thread!”

“Why do black people in america have names that are so different?

In the UK black people were named like.. “Bob” or “Michael” or “Carl” and in America they’re named “Daquan” or “Lu Doni” or “Rashon”.

I’m sure theres lots of black americans who are named like.. “Robert” or so, but I’ve never come across a black person in the UK with a name so dissimilar from the white people.

In the UK “Bob Smith” could be either black or white.

No offense intended to anyone, I’m just curious.”

“When multiple ladies go to the bathroom together, is there a code of conduct as to what can and can’t be discussed or done?

“This is a very very specific one for me.

I’m from Northern Ireland, and there was a conflict here called The Troubles.

My question is to those who joined paramilitaries, both sides, Loyalist and Republican, why exactly did you join and how you now feel about all the things you’ve done?”

“In the movie “Mid 90s”, one of the white kids asks the black kid if black people have to wear sunscreen.

The black kid says that is the stupidest question he has ever heard and everyone laughs.

But he never answered, and I’m here wondering if black people need to or how bad they get it if they don’t.”

“I’ve always wondered do deaf people have a voice in their head?

You know when you read something to yourself how you can “hear” your own voice like you probably are right now?

Do deaf people have that same thing, or not?”

“I have always wondered if the people that wait for marriage to have s** think it was worth the hype?”

“Do you shave your p**ic hair? Have you always or is it something new? And if so, why?

Almost all you see in p**n is bare h**ch and even many of the moms at the pool seem to be bare down there.

Granted I’m out of the race now, but I only encountered one in my seemingly average sample size of partners and I just am always curious about this.”

“Do flamboyant homos**ual and more reserved homos**ual groups view each other differently?

Do they judge each other?”

How much blood are we talking about?

For how many days?

What do you guys do when it happen?

And how can you track it?”

What inappropriate question do you want an answer to?