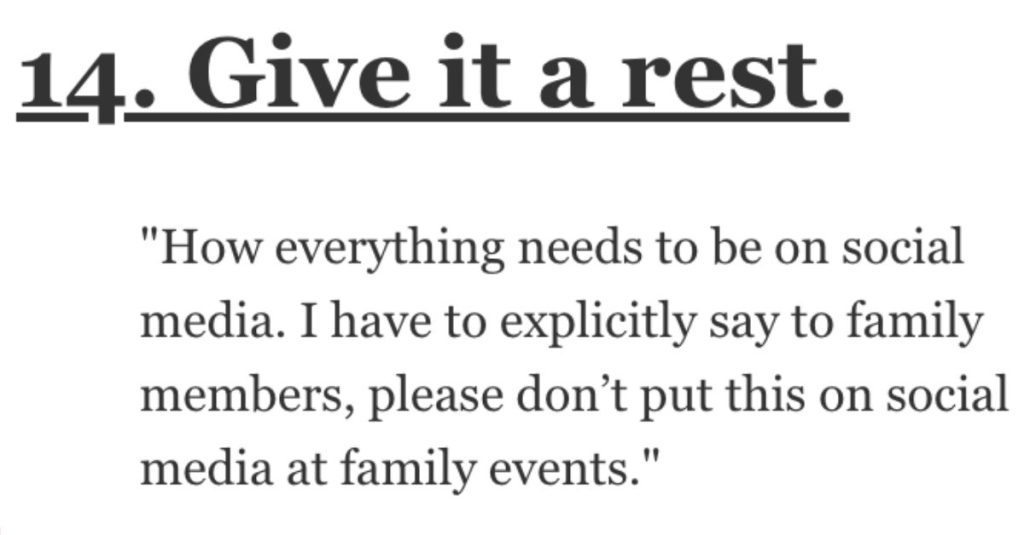 People Talk About the Modern Trends That Really Annoy Them

Trends seem to come and go in a hurry these days.

Music, fashion, and even the way people behave seems to be so influenced by popular culture…until it changes in a real hurry.

What trends really annoy you?

“Going on vacation for the evidence, not the experience.

Social media has exposed every cool place of interest and hidden gem out there… which is cool in theory, but it just means that everything is now more crowded than it used to be, and instead of actually enjoying the experience, people are just interested in snapping their shots and moving on to the next target.

I saw the Mona Lisa pre-covid and expected it to be a crowded mess—shuffling through a line for an hour to have 30 seconds to look at the painting—no surprise there.

But it was depressing to see most people get to the painting, turn around and take a selfie, and move on without another glance. They only saw the painting through their phone screen.”

“Non-stop consumption. Everything is designed to be consumed and then discarded.

Nothing is well made and people act like you’re insane for having a phone that is over three years old.

On top of that, the modern attention span has been decimated and information goes into one ear and out the other, with nothing actually learned.”

These s**tshows empty pocketbooks and ruin friendships. It’s gotten to the point where bridesmaids and groomsmen are expected to shell out thousands of dollars and use up their vacation time for multiple trips, while regular guests are told what color to wear.

4. You knew this was coming.

Imagine being a kid and coming across a video of one of your parents having a tantrum because you aren’t they gender they wanted you to be.”

“How much we glorify being a workaholic.

It seems like everyone is expected to be insanely passionate about their job, as if that’s what they’ve always wanted to be and they’re so driven they always want to talk about how busy it makes them/how much they hustle, etc.

It’s to the point where it spawned that terrible “life hack” trend that just seems to be about freeing up time to… work more. Like, must everything be so god**mn efficient??

Sometimes I just enjoy staring out the window on my commute, or waking up slowly on a weekend morning or whatever. And it’s perfectly okay to work a job you’re just fine with in order to put food on the table and have access to health insurance, etc.”

7. You must always be happy!

“Requiring that everything be positive and not allowing anything negative.

It is like a child sticking their fingers in their ears and pretending they can’t hear something the don’t like.”

When vaccines were first discovered or developed or however you want to say it, they were mostly seen as a scientific break through. A great success. The wonders of man kinds great power and ingenuity. Polio? What polio? But now, it is trendy for many to be now smarter than several years of research and hard work.

To know more in 10 minutes on YouTube then someone who has dedicated years of their life to study what other people before then also studied for years of their life and so on and so on. Years of human evolution, growth, study, break-throughs, accomplishments, ground to a halt by some jack wagon with a social media account.”

“That people think their lives need to be viewed to be lived- it’s like privacy and being private are considered repressive.

People are always online, posting about their lives, and everyone wants validation about every aspect of their lives. Just f**king live ‘em!”

“Nobody is allowed to have hobbies anymore.

If it’s not a “hustle” you should be doing something else according to society.

When I get off work I’m going to play some d**n videogames and relax. I’m not going to worry about my “side hustle”.”

“People who film homeless people’s reaction of being given food, or money, or clothing, or whatever.

The homeless have to take it which is so demeaning to them being filmed.

I used to work at a guitar center pro audio department which is the hub for pretty much all digital creators in one way or another. (USB audio interfaces, microphones, midi controllers, etc.)

And almost every week someone would come in filming, not even subtle, I’m at work looking like hell, and whatever profit or notoriety that comes from me being part of your set without consent will never make it back to me.

“Public grieving. And berating those who don’t grieve publicly.

When Chadwick Boseman passed away, people were hounding his co-stars regarding their responses. When Malik B of The Roots passed away, Questlove actually found out by being spammed on Twitter by a bunch of strangers.

Imagine finding out one of your closest friends died, because random strangers wanted an immediate response from you.”

“How everything needs to be on social media.

I have to explicitly say to family members, please don’t put this on social media at family events.

As an example trying to post that I had gotten engaged on Facebook before I’d even got to tell close family and friends who weren’t actually there.

Then getting defensive when you say ‘can you not post that please’?.”

“The celebration of bad attitudes, habits and toxic traits.

People would rather be praised for being a villain than to be obscure.

People would rather give praise to a villain than to spend a moment not entertained.”

It’s fine to share pictures of your kids with friends, but aggressively documenting and marketing your family life for the public at large is creepy.”

“The lack of basic etiquette around invitations or even just making plans.

People feel absolutely free to not respond until the last minute while waiting for something better to come along, and they don’t think it’s rude to cancel last minute or just not show up without letting you know.”

“Recording strangers to see their reactions.

Especially idiots who do this in drive-thrus, as if those employees don’t already have to deal with enough moronic s**t on any given shift.”

“Couples recording pranks on each other that are so painfully staged. It’s the same super popular trends that are reproduced.

Like do you really need to act so shocked the tenth time your girlfriend pretends to strip in front of the camera but actually has clothes underneath her towel? Are you really THAT shocked?

At this point I just block but I just can’t imagine people have that much time.”

“The notion that everybody needs to “hustle” and have a “side hustle.”

Like its ok that we are all supposed to be cheap-a** used car salesmen hawking our wares with no shame or sense of self-respect.”

“Social media influencers asking for free items unsolicited, then when of course they decline they threaten to (and in some cases do) leave bad reviews forcing the company to have to respond to false allegations for no reason.”

“This is more work related, but it pi**es me off how there is now a work culture of always being reachable by email or text for whatever happens.

A lot of places expect you to be pretty much on call even when you’re not at the office anymore. I worked at an ad agency where days off sometimes didn’t even feel like that, because I would still be getting emails about things and was expected to be checking them.

There should be some level of balance between work and personal life and I feel like that is fading because it’s becoming more and more socially acceptable to adopt this type of culture.”

“Having an opinion about everything, even If you don’t actually know anything about the subject.

Opinions are fine but admit you’re not very well versed on the subject please!

No shame in saying hmm, I’m going to read up on this topic a bit more before making any definitive statements about it.”

“I’d really rather not hear about how much money everyone either has or pretends to have.

It’s just depressing even though I know I should ignore it and focus on myself.”

“Advertising slowly taking over every single aspect of our lives. I’m not really exaggerating when I say over 90% of the mail and phone calls I get are junk or scams.

Data we generate simply by being online being sold to the highest bidder without any real way of stopping it, which in turn fuels more ads. Went shopping more than once at a larger grocery store?

Congrats, you now get suspiciously tailored coupons mailed and emailed to you even though you don’t remember ever giving them your addresses, meaning it’s probably linked to your credit card and banking info.

The internet is great for knowledge if you look in the right places and allows discovery of fascinating things, but it does sometimes feel like we sold our souls to somebody for it.”

What trends really get on your nerves?

Let us know in the comments. Thanks a lot!