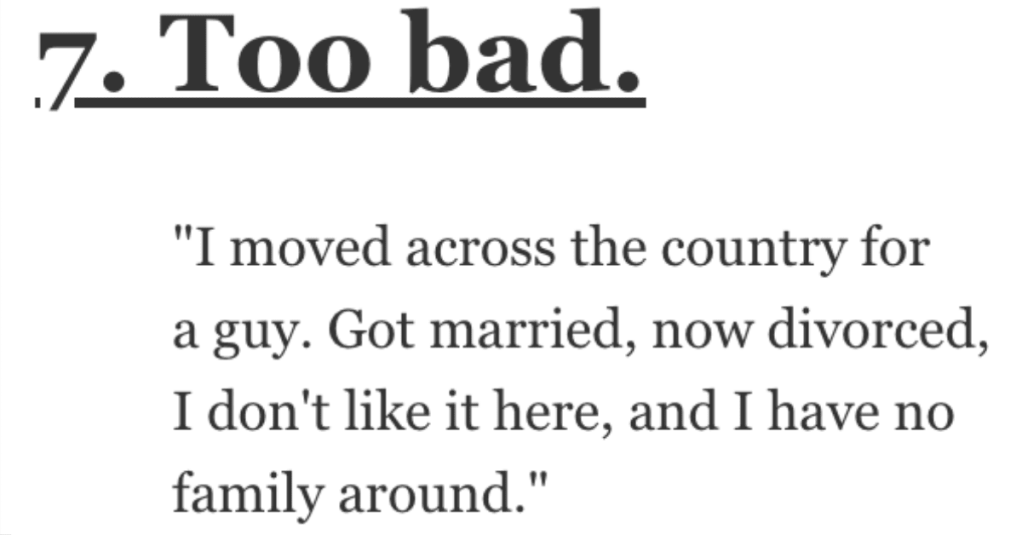 Some of us are worse than others, but I think a lot of people out there do questionable things that really aren’t worth it.

Why do we do the things we do…?

Folks on AskReddit talked about the most high risk, low reward things they’ve ever done in their lives.

Let’s see what went down!

“Climbing up a water tower when dr**k to find a friend.

Turns out said friend was not even lost.

He was yelling at me from the base of the tower.”

“Broke into an abandoned mental hospital on cocaine with a bunch of people I mostly didn’t even like in college.

Technically I got something out of it– a door number from one of the rooms, which I promptly became terrified would somehow make me haunted (because cocaine) and passed off to someone else at the first opportunity.”

“I was a free intern for a flower shop. One day there was a shady person walking in the store basement. Somebody said he stole something from the shop and fled to the basement.

The shop was in an apartment building, street level and the basement led to all over the building. So they said to me a 16 y/o girl to go to the basement and check the situation out.

Well I was young and dumb and went. Thank god I found no one.”

“I was working as a chef in a gourmet bar/restaurant, and I’d become somewhat of a teachers pet in the form of my managers favourite employee because I was never late, covered shifts etc (not for his sake, I wanted more money).

New guy started and he was just awful, only got 2 weeks into the job before almost being sacked but I wanted to teach him the ways. Anyway, one day he carelessly left a cloth on an open flame during prep in the morning of Valentine’s Day (our biggest revenue generator) and the fire ravaged through about 1/4 of the kitchen, including the stock, the microwaves, the cooker and the veg prep area.

And for some stupid fu**ing reason I said it was my fault when the manager was on the warpath, thinking the new guy would be saved and I’d just take a humongous bollocking for being stupid and all would be fine eventually…

Nope. I got sacked. He threw me out.

To this day I will never ever ever understand why I put my neck into that guillotine of fire.”

“I used to dive in ponds at golf courses to collect the lost balls and clean/sort them to sell back to the courses. It’s unbelievable just how many snakes, alligators, and leeches live in those things.

I made less than minimum wage (around 6ish at the time) and had countless close calls with critters. However, the most dangerous creatures on golf courses are old people.

They do not give a f**k if you’re working, they will absolutely send balls of hard plastic hurdling at your head at 50mph without a second thought, then get pi**ed when their ball hit your tank or cart and split open, then demand you hand over some of your recovered balls in compensation.”

“I moved across the country for a guy.

Got married, now divorced, I don’t like it here, and I have no family around.”

“My friends and I used to target and steal those signs that said “If you are caught stealing you will be prosecuted”.

Many illegal things were done and many hundreds of thousands of dollars of stuff was ignored to steal increasingly difficult to obtain paper signs.”

“I once followed a young homeless man I just met because he wanted to show me where he was staying. It was nighttime and he invited me down into a dip in the trees.

We walked through a dark section of forest then he showed me some rocks and small caves with a couple beds set up. Then we left. I literally followed a stranger into the dark woods because…curiosity?”

“My friends and I used to break into expensive looking houses and use their showers.

This was in the late 90s when ridiculous showers were in vogue and we wanted to know if they were actually any good (for the most part they were not). We never stole anything (well, except water). We brought our own towels and toiletries. We were very careful about who we “hit” and made sure they had set schedules and no children or pets.

The reward was a sh**ty shower. We risked jail time.”

“Jumping onto a bus that was pulling away from the bus stop without closing its doors.

“I swam in the Zambezi River when I was drunk on a fishing trip.

I still can’t believe I was that stupid. It’s infested with hippos and crocs known for eating people.”

“I stole every wheel off the chairs in my high school’s computer lab as a joke during a 20-minute break.

I still have one of them.

“Lots and lots of illegal graffiti. For about 3 years it was all I cared about.

Hanging off ledges and bridges, climbing up the sides of buildings, being on roofs, hiding under trains, being in dangerous places by myself at 3am, abandoned buildings, squatter houses, rough neighborhoods. Not to mention the risk of criminal prosecution.

Paint doesn’t just fall into your lap either, one year I spent $5,000 on spray paint on top of getting it any other ways I could. Homeless guy with a knife, a couple of gangsters tried to rob me, a freight train was about a foot away from running over me. (Not all at the same time lol but those were some of the worst bits)

And for what? Just to put some paint on a wall or train and take a photo of it.”

“I once climbed an old truss bridge to get some neat pictures of myself.

I climbed under it and sat on the beams beneath the bridge, I climbed the the very top, I hung off the edge of the bridge above several rocks.

Once I got done I  showed the pictures to my friends and they said they sucked.”

“Snuck a girl over and had unprotected s** while my parents were home.

“During an all-nighter study session with my college roommate we decided we wanted to get some McDonald’s.

It was around 1 am, so we left all of our stuff in a common study room (laptops and all- wtf) and got in my car. It was pitch black, super foggy with my lights on, and raining to top it all off. I couldn’t see more than a foot in front of my car so we were driving 10mph down the highway on no sleep.

After less than 5 terrifying minutes we decided the cheeseburgers weren’t worth it and went home. Essentially high risk, no reward.”

“While in Army basic in 2004, I took a piece of cherry pie during dinner chow, covered it under 2 slices of bread and ate it before eating any of my actual dinner.

One of the guys in my platoon saw me but never said anything. If the Drill Sergeants would have caught me they would have made me (and my platoon) pay with a round of 200 (push-ups, sit-ups, burpees) and most likely mountain climbers unit a few of us threw up.

It was the first thing I ate with sugar in 2 and a half months and it was DELICIOUS! Especially since I never got caught!”

“I was stationed at GITMO (worked exterior security, nothing in the facility itself) and its actually a pretty laid back place to work. Anywho theres a bunch of different beaches we could swim at and me and a few others thought it would be fun to swim down around the fences and snap some pictures on the Cuba side.

Turns out they really didn’t like that. They didn’t approach us but there was an announcement made that doing such was highly illegal, they shut down the adjoining beaches and they demanded we come forward.

We never did and they never figured it out..but yeah we basically risked an international incident for a couple of pictures. Stupidest thing I’ve ever done.”

“Sent my boss a glitter bomb, never told anyone who sent it.

The whole organization, thousands of people, know it happened, boss flipped out when glitter went everywhere.

“Stole some random season of Seinfeld DVDs from Walmart by putting them under my hoodie.

I risked my freedom for a sofa, a nice sofa, but still.

“Hid an ab**ive boyfriend from the cops.

Ended up breaking up with him afterwards and going to jail for a day (I was super lucky, harboring a fugitive is a felony, folks). I risked having a permanent felony on my record for a dude without a job who regularly verbally abused me.

Without a doubt the stupidest thing I’ve ever done because I thought I loved him and wanted to be with him forever.”

“Once got in a fit of road rage…

A guy cut me off on the interstate, so I honked at him (wasn’t a quick honk, it was a longer one, few seconds)

Guy slows down and matches the speed of the car in the right lane, so I’m blocked now.

I flash my headlights and honk again

He then accelerates heavily back to speed

I floor it, move to the right lane and move to pass him

He floors it, now we’re both going faster (definitely got over 85mph, limit was 65 IIRC)

Coming up quickly on a delivery truck in the right lane (he’s still in the left, I’m in the right) I punch it harder

I just barely get in ahead of him then cut him off, maybe 50ft before the delivery truck.

I slow down and match the speed of the delivery truck. Wait for probably a minute at that speed (speed limit) then pass the delivery truck and move right. (he had been tailgating me and half driving on the shoulder)

Guy floors and flies past, I return to going 5 over the speed limit.

Lots of risk, zero reward. I was a complete idiot and there was nothing to gain. Saved no time and endangered at least 3 lives, if not more (mine, other guy, and delivery truck).”

In the comments, tell us about the most high risk, low reward thing you’ve ever done in your life.