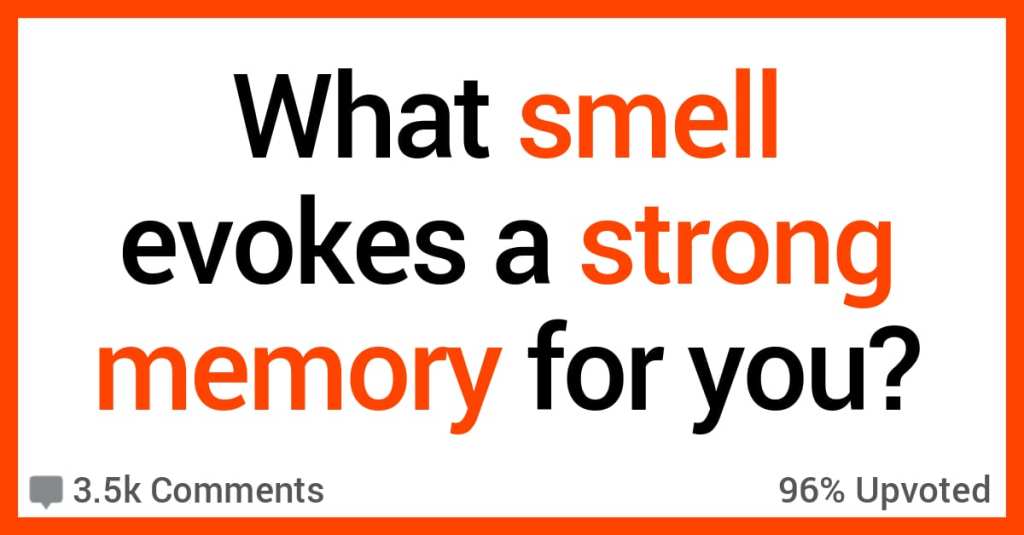 It’s really quite strange how smells can trigger memories that we haven’t thought about for years and years.

I had one recently where I was in the grocery store and some combination of odors hit me just right…and memories of my elementary school lunchroom came flooding back.

It was so bizarre! but that happens once in a while, as I’m sure you know.

What smells bring specific memories flooding back for you?

Reminds me of summer camp that was a huge relief from the sh*tty town I was from.”

“The smell of sunscreen reminds me of my birthday pool parties and summer camp.

A friend and I decided to share a half gallon of Captain Morgan on Christmas night a long time ago. For some reason we sat in my car drinking and finished the handle.

After getting out of my car the rest of the night is blank and we both woke up in a park the next morning. Great times, but if i ever smell spiced rum it makes me gag.”

“Every fall the farmers that surround my city used to burn their fields after harvest. It always coincided with the first day of school.

So any crisp fall morning that includes the smell of field burning, brings me right back to my being a nervous kid, in brand new shoes, anxiously awaiting the school bus at the end of my driveway.”

“Really strong coconut suntan lotion takes me back to Australia in 2010. You would be walking along and boom someone would have it on.

I get a whiff and instantly remember that trip and everything I was doing. Love it.”

Girl I “dated”/pen pal before I could drive would write letters with that scent on every letter.

I’ve smelled it a few times and it immediately brings me back.”

“Gasoline in the morning always makes me think of all the fishing trips I had with my father.

We would stop to buy gas for the boat and usually get a doughnut or two.

I’ve had a couple concussions bad enough that I smelled what I can best describe as the odor of truffle oil.

Wear your helmet folks. I’d be dead without them.”

“There used to be a man who was practically my grandfather. For as long as I knew him, he always had this BO smell, he never showered or very rarely. It was a strange smell, not pungent or vile more like stale.

A number of years after he passed, I missed a t shirt for a wash cycle down the side of my bed. When I found it god knows how long after I was immediately hit by that smell. That brought dozens of memories back all at once out of nowhere.”

“Pirates of the Caribbean water.

Has a distinct smell that I’ve never smelled anywhere else. They put bromine in all the water rides, but for whatever reason the Pirates smell is different from all other water rides.

The smell fits perfectly with the ride’s theme and it’s my favorite ride. I grew up going to Disneyland a lot so I associate that smell with the pleasant aspects of my childhood.

In fact, there’s so many smells from Disneyland I can put here.”

“Man, I recently started smoking weed again after years and years of not smoking.

As soon as I smelled the weed it was like the floodgates were opened and little bits of my stoner life just came flying at me.”

“I once lost my sh*t in a health food store when I smelled an all natural clay scented bar of soap.

I remember spending hours in the river at my best friends cottage scooping up lumps of the stuff and getting it everywhere. I would spread it all over myself because it felt good, and I tried to make little figures, but they always cracked in the sun.

It had such a pure, natural smell and was so perfectly captured in the soap.”

“As much as I hate them, cigarettes. It just reminds me of my childhood actually.

Waking up in the morning and hanging out with my dad, but he always had to have his morning smoke.

So now whenever I smell cigarettes I usually think of him.”

What smell brings back a flood of memories for you?