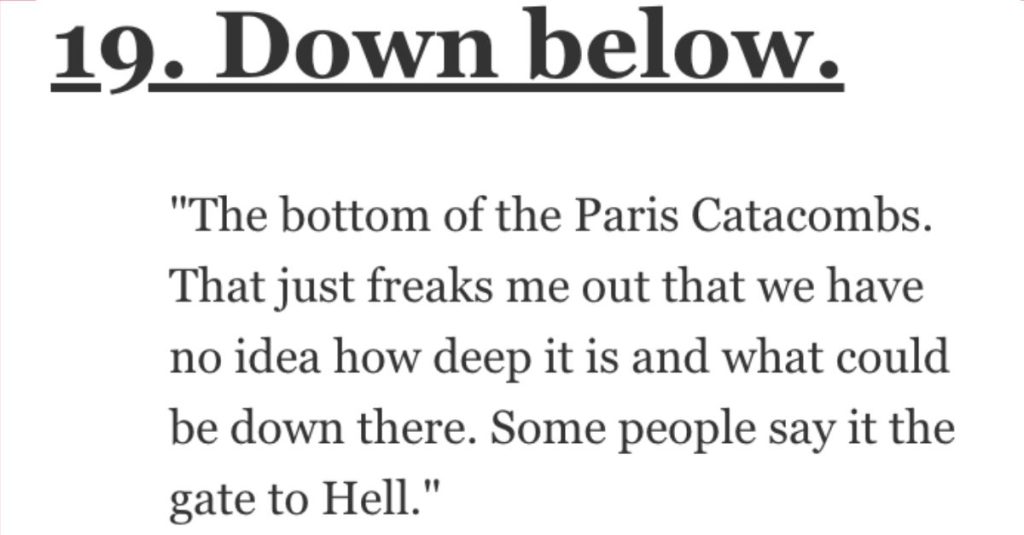 I know an unsolved mystery I want to know the truth about.

I’d want to know who the Zodiac K**ler was. The man who terrified the San Francisco Bay Area in the late 1960s and early 1970s was never caught and his identity is still a mystery…

Folks on AskReddit talked about what mysteries they’d like to see get solved.

“JonBenet Ramseyjust because I am so tired of hearing about it.

I was in Colorado when it happened and never stopped coming up.”

Who was he, who k**led him, why was he k**led & what was the significance of the Rubaiyat?

My theory is that he was an undercover CIA agent, doing something questionable, when he was k**led the agency decided to destroy any evidence of the link & deny everything, cause it was easier than explaining why he was there.”

“What actually is dark ‘matter’?

There are so many speculations of what it could be, but we just don’t know. It’s makes up over half of the universe.

“Is the Loch Ness monster real?

I will find you Nessie, mark my words.

As a Scotsman I will be on the front line!”

“That Gardner Museum that was robbed in Boston.

It was a documentary on Netflix recently and surprised me that they still don’t know who did it and why they did the weird things that they did in there.”

6. Still a lot of questions.

“The inconsistencies surrounding the JFK assassination.

And the Warren Commission report is clearly not up to the task.”

The families of all involved have no closure & it is truly terrifying the circumstances around how the airplane went missing.”

Damien Echols, Jesse Miskelly, and Jason Baldwin (The West Memphis 3) were tried and convicted for the m**ders and eventually accepted an Alford Plea to be released.

I’ve seen the different documentaries and read the books, including spending hours on the Callahan site, pouring over “evidence” and I’m not 100% convinced either way.

I would love to know the truth, as would a lot of other people.”

I live in Iowa not far from where he was taken; it was ABSOLUTELY the West Des Moines police. I watch too much true crime and the one thing that scares me the most is child trafficking.

He’s in his 50s but I want to know his story from the time he was taken until now. Also f**k traffickers and the p**os who pay for it.”

“The disappearance of Madeleine McCann.

There’s loads of theories about what happened to her, but I’d like someone so definitively prove what actually happened.

I remember her disappearing 15 years ago when I was in school and seeing posters of her in my local shop, it all seemed so surreal.”

“I went to high school with Chandra Levy. Only met her once.

Still extremely sad and I know they’ve had suspects who confessed to her m**der but I don’t think it was ever actually solved?

My father met her parents years later and they were obviously just destroyed. Walking around in a haze it seemed.”

“Did Hitler really die in 1945 or did he fake his d**th and escape to South America where he lived out the rest of his life?

There’s a few bits of evidence to support this theory.”

“What happened to Kyron Horman?

He went missing from Skyline Elementary School in Portland OR, was seen that morning at a science fair and went missing seemingly while walking to class. His stepmom was a huge suspect in the case, apparently tried to hire a hit on her husband, Kyrons dad.

There’s a lot of speculation around why and how she did it but we just don’t know. It’s definitely a rabbit hole of a case but it k**ls me that we don’t know anything.”

“The disappearance of Madeline McCann.

I need to know what happened to her.

I have a pretty solid theory myself but I just need to know for sure.

I want definitive answers, I want them now, and I want the guy who narrates the show to tell us exactly what is up.

“Could it be…yeah, actually, turns out it could. Here is exactly what happened, and also when, how and why.””

“There are two true crime cases that I would absolutely love to have the answers to, but I have accepted that I probably never will.

One is the m**der of JonBenet Ramsey and the other is the disappearance of Timmothy Pitzen.

I have an associates degree in Criminal Justice and read a lot about unsolved m**ders and missing persons cases and these two specifically are ones I think about a lot.”

“The death of Jo Ann Romain.

I grew up in Windsor, Ontario (right next to Detroit, Michigan) and the “official” story is that one Sunday evening after church, she decided to k**l herself by going into Lake St.Clair/Detroit River, her body somehow ended up on the Canadian side in Amherstburg many kilometres away although the water was very shallow where she “jumped in.”

Eye witnesses say that her car was moved by someone that night, her brother had debts with sketchy people, fights over inheritance, and a corrupt cop cousin.

There was an episode on it recently in Unsolved Mysteries but I remember when her body was found back in 2010, it was the talk of my school for a couple of weeks because the guy who found it was the father of a rich kid that lived in one of the Boblo Island mansions.”

“What happened to Natalee Holloway. I’m from the same area that she is, and my parents knew her parents.

I was with my dad in the grocery store when we saw her mom – Christmas time after she had disappeared in summer. She was always a great person, and still asked about my family and talked about where I was currently living.

She did look just haunted – like she had not slept since it happened or something. My dad and I talked all the way home about how horrible it was, not knowing if her child was dead. Such an evil, evil thing to do to someone.”

“The bottom of the Paris Catacombs.

That just freaks me out that we have no idea how deep it is and what could be down there.

Some people say it the gate to Hell.”

It’s odd this is not known yet.

I kinda like entertaining the idea that instead of doing it the normal shark way, they have the most strange and elaborate way to reproduce instead.”

For the people that don’t know, hundreds of people are missing in national parks all over the U.S. under EXTREMELY weird circumstances.

Reports of kids missing for days just for them to show up as if never happened with no injuries.

They also don’t remember what happened. Definitely worth looking into if you haven’t.”

I have a lot of feelings on the topic that I won’t get into, but someone knows who really k**led those kids, and that person’s still out there.

I have my own theories but they mean nothing.

I’m glad the 3 were exonerated and thats fantastic for them but where is the justice?”

“The m**ders of Abigail Williams and Liberty German.

As a Hoosier who lives close to Delphi, Indiana, these m**ders shook our small(ish) communities to the core.”

I doubt it could ever be solved nowadays but still such a weird, funny, and creepy event that knowing who was behind it wouldn’t be necessary but it would still be cool to know why they did it.”

“A lot of smaller ones. I volunteer on the Doe Network.

It bothers me so much that there are so many John and Jane Does who I’ll never see identified. But I will see quite a few. Familial DNA tests are uncovering a lot of these mysteries.

They figured out Lyle Stevik, Buckskin girl and Orange Socks. If you aren’t familiar, they were prominent Does. There are so many missing people too. It’s so sad.”

A young nurse living in Saskatoon in spring of 1962 who went out of her 7th avenue apartment one evening and never returned. Thirteen days later they found her mostly buried body by the shore of the south Saskatchewan river which runs through the city, just 200 yards or about ten blocks from her apartment building.

The year before she’d entered a beauty contest and won it. The grand prize was Johnny Cash, who was in town (he had a cabin up north), serenading her in front of the audience. The song was ‘The Girl From Saskatoon’ which he co-wrote and recorded at least once. When Cash heard the news of her m**der he had the song shelved, never to be played or recorded again.

The thing is, one of her next door neighbors, if you do a little digging, was involved in an infamous m**der case in the US, a case that indirectly became a Hollywood movie.

And his job at the time might have brought him in close contact with his neighbors. I think he’s still considered a suspect because of all the news stories and videos his name never gets mentioned.”

What mysteries do you want to see get solved?