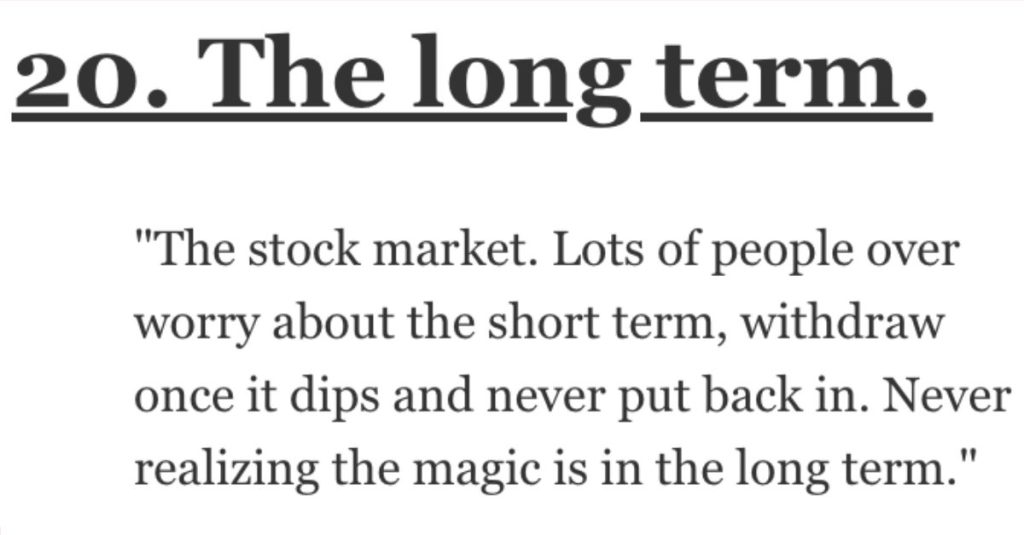 Once in a while, I think about things that seem like scams and I think to myself, “well, maybe you just don’t know what you’re talking about…”. And that could be the truth!

Because we all kind of fear what we don’t know…right?

What do people think is a scam because they don’t really understand it? AskReddit users shared their thoughts on the matter.

People just can’t fathom that just talking to someone who is not involved directly in your life can really help with processing and resolving a problem.

You only get out of it what you put in.”

They take a lot of time and a 100% commitment to never, ever carrying a balance, but you can definitely earn a lot of rewards even without playing the churning games.

The Flyertalk.com community is amazing for anyone wanting to get started.”

Not me, but those who are anti vaccination really have no understanding of virology, immunology, epidemiology or how to assess relative risk.

They probably fall into many of the other things that they “think is a scam but they don’t understand.””

They are a good investment product for the right portfolio.

Certainly not for everyone, but they serve a valued purpose for some people.”

“In America the sad answer is this is how people are stating to look at unions.

People saying “I don’t wanna pay union dues every month” even though my dues cost me less then 2 hours of work a month and my wage is more then double what I would be making non union and that doesn’t count the benefits that aren’t even supplied to non union guys in this trade.”

“But I’m not sick and I don’t wanna pay for other people and never use it” blah blah blah. You could fall flat on your face and second and need 500 bucks worth of stitches and paink**lers. You can get run over at no fault of your own. You can have an aneurysm.

Getting regular checkups is even gonna bring your premiums down, the insurance would rather pay 50-100 for a yearly dental checkup than 15k in prosthetics because all your teeth rotted out because you didn’t see anyone in 10 years.

Why is the concept of socialism so scary to some Americans? What’s so bad about it? Being able to rely on the community? If I get sick, I don’t bankrupt myself. If I lose my job, I won’t lose my home and can still live a frugal, but dignified life.

I would rather live a life with a lot of security and all the same options than a life with zero security but “mah freedomz”. Medical debt bankruptcy is not freedom.”

“The theory of evolution.

First, the definition of “theory” in science is very different from the colloquial term

Second, evolution and its mechanisms have been proven repeatedly and put into practice across genetics, medicine, paleontology, comparative anatomy, biogeography, embryology, and molecular biology

For the scientific community, it’s not even a question.

However some (primarily evangelical Americans) don’t understand it, and with a level of confidence that rivals Dunning-Kruger, dismiss it as a scam.”

“Wine. I work as a sommelier.

Outside of the wine industry, on reddit, and other places, you constantly hear people talk about the study where the “experts” are fooled by cheap wine, etc. Most of these “studies” are done at universities, with inexpensive wines.. and people who are not really experts. In general, more expensive wines are a lot better.. but are also a lot rarer. There are of course exceptions ‘cheap wines’ which are fantastic.

These are rarer, because as a wine gets a reputation for being good, the demand increases. With the famous/rare wines, there is more competition for them. Chateau Lafite, for example, can only produce so much wine –the buyers at first were only the French (and the British and other Europeans), when the Americans started buying it and there was more demand the price had to climb, when the Chinese started buying it the price could only go up.

Then we have the problem of wine in restaurants being a different price to what you see at the supermarket. Depending on the location, (or in America) the State, you might have very different taxes/laws between bottleshops and restaurants, and the wine may legally need to come from different suppliers. Restaurants tend to not be able to buy in as large of a bulk, etc.

Further with a restaurant the extra cost is that the wine is “guaranteed”, if it is corked/off.. the restaurant will provide a new bottle. The waiter/sommelier will be trained (to at least some degree) and know what wines they have and help you pick one that goes with what you are eating. With this you get glass service, decanting, etc.

All of this equals a higher cost at a restaurant than a bottle shop. It is not a “scam”, but it is a bit like eating a steak at a restaurant and going ‘oh, I can buy meat at the butcher for less’. Of course you can!”

People are generally concerned about the pollution it causes when in reality the radioactive waste from a nuclear power plant has a relatively low impact on the environment, especially when compared to the fallout of more resource heavy nuclear weapons.”

“My dad worked with a guy who started a business with the intention of using it to lower his taxes.

When he realized that it was actually making quite a bit of money he closed it in a panic fearing it would bump him to the next tax bracket.

Would be funny if the guy wasn’t a f**king school principal.

I was fourteen at the time and asked my dad if the guy was that dumb.

My dad confirmed the guy was indeed that dumb.”

“Travel insurance is absolutely worth it.

I always get world wide travel and add the USA – due to high medical costs USA is usually an added extra.

I couldn’t imagine the bill if anything were to happen while I was in the US.”

“We had a gal in the telco who was retiring under a surplus – meaning they would pay her so much for each year she worked, in addition to her pension.

She turned the money down because she didn’t want her taxes to be too high. I didn’t know her and heard about it after she left.

The Union guys tried to explain it but she just would not listen. I don’t know if she thought it was a scam but she didn’t trust the IRS.”

“There was a time when my parents thought buying stuff online and paying with a credit card it’s a scam.

It took me a while to convince them that if you know which sites are good to order from and which are bad, you can actually avoid scams.”

14. No credit cards in this house!

“My parents think that credit card points are a scam.

They have claimed that they are a trick to get you into debt (which I’m sure does happen to some people but it’s not a ‘scam’), and that they will tax you on the points you use.

I’ve paid for multiple vacations, including my honeymoon and a week in Hawaii completely with points, yet they still wont use theirs.

They have hundreds of thousands, if not over a million, points.

“My dad and step mom once freaked out because the census was at our door.

She had a badge and clipboard.

Then my psycho step mom proceeded to get mad at me for opening the door.

A lot of people expected us to just fix things for free.

Others would take it as an insult when we would quote prices or ask to be paid for a job.

Send a bill and some people would ask why or what is this.

Ask us why we were ripping them off even though the bill was itemized and the price was discussed before hand.

It was a horrible industry to work in because of they way people are.”

It was great when they arranged all travel from overseas apartment to our house when child broke their ankle on an internship.

Paid all of the our out of pocket expenses, including our deductibles/copays until child was functioning.”

Some of these medications could cause fatalities or worsen the situation if used/prescribed wrong!”

Sure they are cheap and probably poorly made, but for $100 I got a power washer.

Do you know how much joy a power washer can bring someone?

Neighbor is washing his car with a hose looking like a fool.”

Lots of people over worry about the short term, withdraw once it dips and never put back in.

Never realizing the magic is in the long term.”

Roughly 3-5% of thousands of people a year who search for agents when trying to get a book published from a traditional publisher are accepted.

When musicians try to create an album, they have to usually pay to use a studio, have someone market it for them, and edit the song. Why is publishing seen as any different?

Everyone expects to be paid for their book, when in reality, you have to pay someone to even take a glance at it, let alone give you any worth while feedback.”

“My grandparents still think online commerce is a scam.

I explained to them that if it was a scam it would have imploded long time ago.

Online bought stuff has the same kind of warranties as locally bought stuff, plus the extra warranty for goods bought outside shops.”

“Older guy I worked with in high school. He was in his 20s.

He wouldn’t file taxes because he didn’t want to pay them. Our boss sat him down and explained to him that he probably had money coming back and sooner or later the IRS would probably catch him not filing and be in real trouble.

I was in the Air Force and after Operation Desert Storm the Gov decided to do a force reduction, by a lot. They came to us middle management NCOs and offered us a lump sum (they had a big formula to determine how much you would get) to leave the Air Force.

It worked for some guys, took the money and got better jobs outside the military. Guys like stayed because we still had a shot at promotion and close to retirement. We would make more in retirement in the long run than what the lump sum would be.

One guy actually took the money and he was close to retiring. A whole bunch of higher ranking people talked to him explaining that he would make much more in the long run in retirement and his health benefits than taking the money.

His only reply was “I don’t want my ex-wife getting any of my retirement.” She was entitled to half of it.

That was his whole reasoning. He got 28K and was in his late 30s. Retirement would of been for life. One of the higher ups told him if his wife found out about the 28K she could get part of that too.

But, all he would say is “I don’t want her to get half of my retirement.””

What do you think is wrongly labelled as a scam?