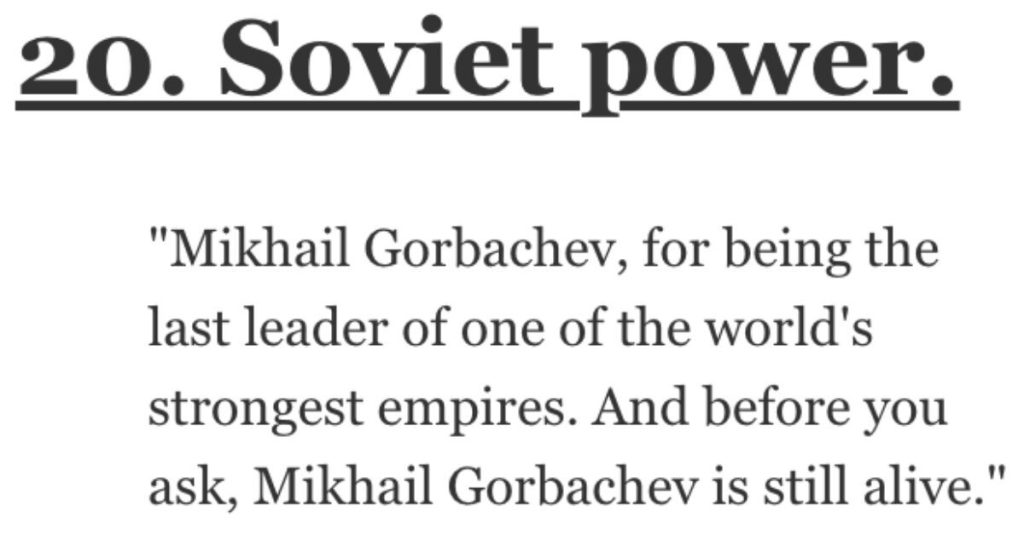 If I had to guess who is alive right now and will be remembered five centuries from now, I’d have to say…Bill Gates.

I think that’s a pretty safe bet…do you agree?

Yup, that’s who I’m sticking with.

Who is alive now that will be remembered in 500 years?

in 500 years school kids will take field trips to visit his disembodied head floating in a jar at his Martian presidential palace.”

“My bet is on Bob Dylan.

If we have a Shakespeare of our time, Dylan is definitely a top contender.”

“Danny Elfman will be remembered as the greatest composer of the turn of the century.

If you don’t think so, google his name and see what all he has composed.”

He’s set back our response to climate change irrevocably.

He might be remembered as the devil he is.”

I imagine films will be great historical documents of the 20th century, you see/hear how people talked, dressed, how cities and towns looked.

They can tell you a lot about a society and culture.”

His work in linguistics completely changed our understanding of how the human mind organizes and interprets language.

He’s also been a huge influence on our understanding of politics/government/media.”

Sure, today he may not be somebody you hear on the radio like Justin Bieber or lana del Rey etc. But in the appropriate circles he’s pretty much a living visionary.

The same way a child might learn to play Bach or Beethoven, a cellist in 500 years might learn a Ma piece.”

Fantastic speaker and wonderful scientist. Classic story of someone who spent a career (40+ years) working on a particular problem and ended up being one of the central members on the team that discovered gravitational waves.

I’m beyond underqualified to speak on the subject but it truly is a discovery on the proportions of Galileo and it’s likely that his name, beyond 500 years from now, will be discussed.”

An ascendant China is going to scramble the world order for centuries.

As it’s leader during the hegemonic shift he’ll be remembered.”

Regardless of your political views, he was the first black President of the United States.”

A legendary writer with an absolutely staggering catalog of works that have massively influenced other industries like film and TV.

I don’t think he will be easily forgotten.”

He’s one of the best composer currently alive, and I wish his work will be still celebrated in a few centuries.”

I think the internet will be remembered alongside the printing press as ushering in a new age, and this guy will be the name that is taught behind that.”

“I think it’ll be Bill Gates. He’ll be associated with computers just like Gutenberg’s press.

Did he invent computers? No. But I think he’ll be remembered for it.”

This one is the last one.”

“The first person to set foot on Mars.

This is a milestone from every perspective, and I am pretty sure this person is alive.”

The ideation and identification of the Higgs Boson as an elementary particle.”

All of whose names you don’t know today.”

“Possibly the Queen of England.

Even though her impact on the world is somewhat minimal, most of the Monarchs are remembered.”

“Mikhail Gorbachev, for being the last leader of one of the world’s strongest empires.

And before you ask, Mikhail Gorbachev is still alive.

His image will be Rick Rolling people for generations.”

People in 500 years will watch those documentaries in school learning about how nature used to be.

His songs have legs. I think musicians will be remembered more than politicians and business people.

We have records of emperors spanning back thousands of years from different nations.

Putin is an emperor in all but name.”

Mathematicians, physicists, scientists, etc. that championed significant results and whose names are carved into terms and concepts within their fields forever are the ones whose names will be studied even 500 years from now, unless a field completely d**s out.

These are the people that nobody, outside of professionals in the field, knows about today; but do you really think the general public knew who Newton or Galileo or Copernicus were during their lifetimes?

Also personal opinion, I don’t think Hawking will be remembered 500 years from now by anybody but people working in the physics of blackholes or I suppose I’ll be generous and extend it to quantum gravity as a whole.

The problem is, in 500 years these fields will be expanded so much that these individual names will become further and fewer, so you really have to be of legendary status in the significance of your work and frankly, I don’t believe Hawking did as much as some of the greatest physicists alive even today.

Physicists like Leonard Susskind, Witten, Penrose (debatable), and Weinberg (I’m going to count him because he literally just passed away a month ago) are the ones whose names have been attached to a wide variety of fields within theoretical physics or physics as a whole and will probably be known as fathers of a certain subfield they helped create or inspired.

Additionally, mathematicians like Wiles, Terrence Tao, Perelman, etc. will have their names attached to proofs or entire fields of mathematics in the future. We aren’t going to stop studying math or physics.”

Who do you think will be remembered in 500 years that is alive now?