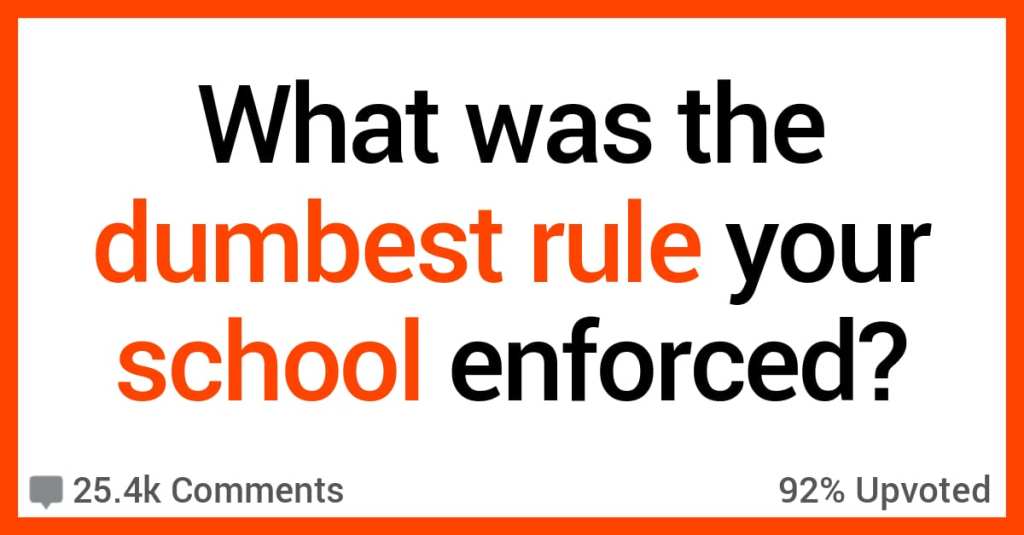 People Talked About the Stupidest Rules They Had at Their Schools

I still have a hard time believing that I actually went to school for 12 years until I graduated from high school.

The cold, early mornings, the bus rides, the long days, and of course…THE RULES…

There were so many of them! Ugh. I really don’t miss those days at all…

AskReddit talked about the dumbest rules they had at their school. Let’s take a look.

“If you were involved in a fight, you got suspended. While it sounds reasonable, context didn’t matter.

I got suspended once not for throwing a single punch, kick, whatever. I got suspended because someone knocked the books out of my hand and when I reached down to grab them they punched me in the face.

I got suspended for walking down the hallway and unprovoked getting punched in the face.”

“Can’t wear too many matching shirts because you could be a gang.

This was in regards to a kid with cancer wanting to make a bunch of shirts.”

3. Put on some clothes, mister!

“You got in trouble if you wore just a hanes white t-shirt after school because “you were in your underwear”.”

“My high school banned t-shirts that had the cover of Rush’s album Signals, an album popular at the time, which features an image of a dog sniffing a fire hydrant.

They considered it scatalogical because the dog was about to pee on it. This struck the entire student body as extremely stupid, and roughly 1/2 of the student body picked a day to wear the t-shirt.

“We were all given these ugly planners at the beginning of the school year, with a few pages at the back filled with ‘hall passes’.

If you didn’t have your planner, or if all your boxes were filled, you weren’t allowed to go to the bathroom. And no, you couldn’t buy a new planner. Or borrow one from your friend.

The only excuse you had was if you had a doctor’s note, but no doctor is going to give a note for an upset stomach caused by the school lunch.”

6. What’s going on over there?

“In grade 8, we were banned from standing in circles at recess because of potential scandalous activity going on in the middle.

We stood in squares instead.”

“They banned the word snap, since everyone used it instead of sh*t.

So we all just started saying sh*t.

The snap ban lasted about 3 days.”

“The $200 blazer was compulsory and we got detention every single day until we got it.”

“A girl and a boy couldn’t sit together.

The school employed “disciplinarians” to roam around the school and monitor this “activity”.

If found, you will get a reprimand, if found repeating the offence, you get sent to the principal office and if continuing, then eventually escalated to the parents, etc!”

10. Worried about your health.

“Middle School had banned salt and pepper from being used in the cafeteria, claimed it was too unhealthy.

“We couldn’t wear winter clothing (jackets, hats, gloves) in class because they were “gang symbols.”

This was a small farm town in Wisconsin. Besides obviously having no gangs, it was f*cking cold, even indoors, in the winter.

But clearly wearing warm clothing is something only gangs do.”

As you can imagine, the boys at school started giving each other very sensual high fives for the rest of the year.”

“No touching the walls.

They restored a building with historic value using, among other things, period appropriate paints. They then opened the planned primary school there and proceeded to try to get children to respect the restoration work.

So we had a few years of benches in the hallways being 10 cm from the wall and children being reprimanded for leaning against the wall before the faculty gave up.”

Do you remember some dumb rules from your school days?