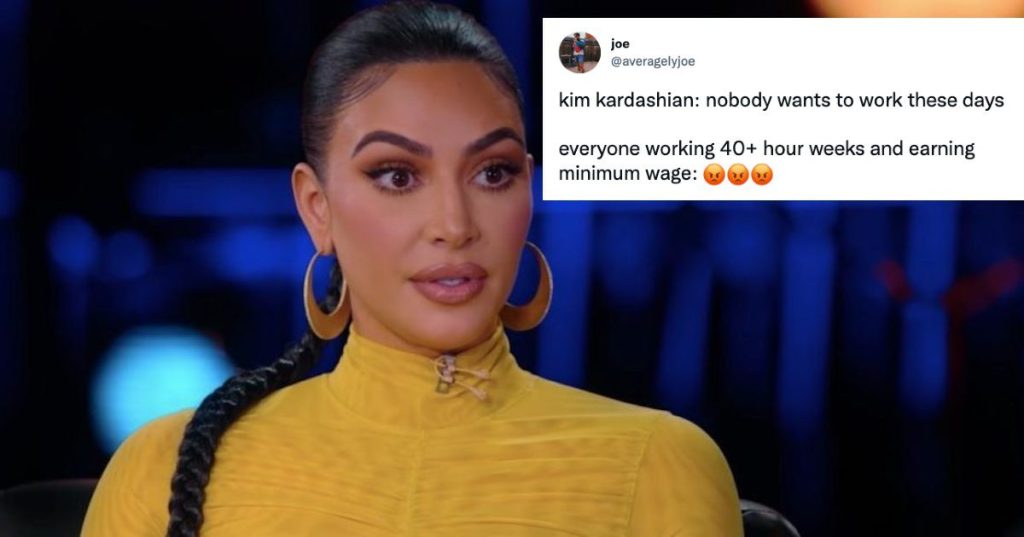 Kim Kardashian got a lot of people talking on Twitter for dishing out some advice to her nearly 72 million followers on the social media platform.

In an interview with Variety, Kardashian had these words of wisdom for women out in the workforce.

“I have the best advice for women in business,” Kim Kardashian says. “Get your f–king ass up and work. It seems like nobody wants to work these days.” https://t.co/HuddEEXmoM pic.twitter.com/KJCIlaVX3S

And she added this in a follow-up video.

The video is worse ??pic.twitter.com/O0S4871Nyu

As you can imagine, a lot of people on Twitter had some pretty strong opinions on the celebrity’s advice.

One woman talked about her personal experience working for the Kardashians…and it doesn’t sound good.

And another Twitter user threw some shade at Kardashian for seeming totally out of touch with how the real world works.

Yes Kim, people are tired of working 30+ hours a week to earn 1/920 of what you get by doing literally nothing and signing your name to a product someone else developed

This man had a pretty hot take on Kardashian’s advice.

Says the woman born to a wealthy & connected family whose only claim to fame was being friends with Paris Hilton prior to her sex tape getting “leaked” and then parlaying that notoriety into a reality tv show that literally made her a multimillionaire for doing NOTHING. ?‍♂️?‍♂️?‍♂️

But one person on Twitter took the opposite stance and said that a lot of people don’t work and blame wealthy folks for their problems.

She’s not lying though. Many folks out here don’t work and then whine about being broke and blaming rich people. This comment section is excellent proof.??‍♂️

And last, but certainly not least… the average joe..

kim kardashian: nobody wants to work these days

everyone working 40+ hour weeks and earning minimum wage: no shit

What do you think about what she said?