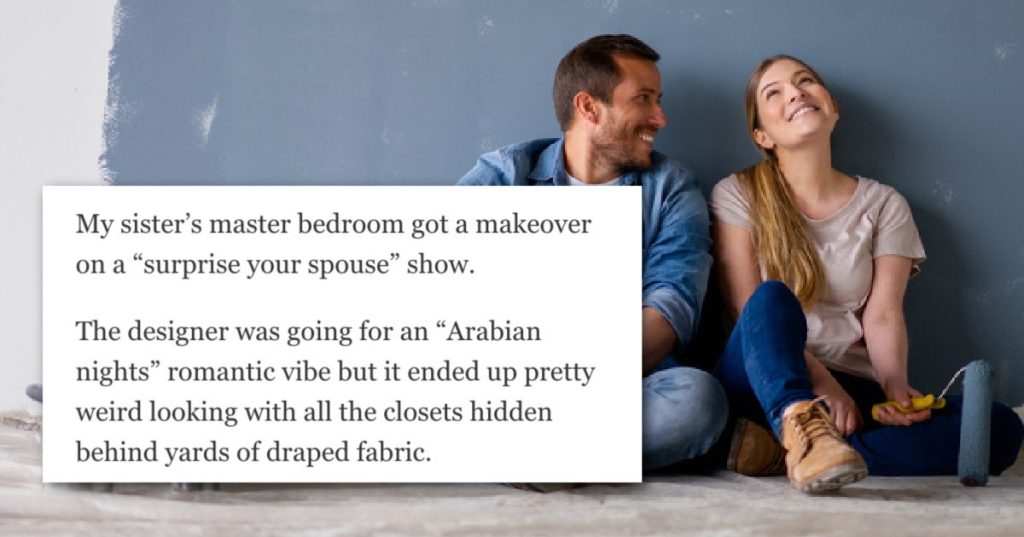 If you’re like me, you’ve seen at least a few episodes of just about every home makeover show available. There’s something so satisfying about watching a house that’s broken down or ugly turn into something beautiful and loved again, right?

We all know, deep down, that these are scripted television and not actual reality, but I mean, we can’t see behind the curtain so we mostly choose to be fine not knowing.

If you’re curious how these homes hold up, though, or whether or not people are still happy with the transformation down the line, keep reading – some of the homeowners who have been there are dishing below.

My brothers house was on one of these shows.

I think it was Changing Rooms or possibly another show by the same cast and producers.

It was one of those shows where they do 3 rooms in the house and mine was one of the rooms they decorated. It looked so pretty, they decorated it to look like a fairy woodland with huge tree murals on the walls and a nights sky of stars hanging from the ceiling.

But it held up really badly, all the murals on the wall peeled off and it looked bad pretty quickly.

I had fun shooting the show though and it was a cool story to tell my friends at school.

8. Gorgeous but not them.

My college roommate and her husband were on Fixer Upper. They were so excited! Until everything started. They could barely give their input for their vision of the house. They had to “accept” whatever style Joanna thought best for their house.

It was gorgeous, obviously, but not them. Ya know? They also barely saw Joanna & Chip. Told to act as if they were long time close friends, but in reality she said she spent maybe 1hr total with Joanna.

Friends were on a show a few years ago. It was super intense 3 weeks of filming and the redesign looked great on camera. In reality it was literally things stuck together with staples and tape.

After the show my friend took 2 weeks off work to rebuild everything properly.

My countertop company was hired to fix cabinets and countertops for a house after a property brothers episode.

Like I’ve seen others comment, the show filmed around all the problem areas so on the episode looked great. The homeowners were livid after the show just picked up and left and we were stuck dealing with them.

Not a fun few weeks.

My sister’s master bedroom got a makeover on a “surprise your spouse” show.

The designer was going for an “Arabian nights” romantic vibe but it ended up pretty weird looking with all the closets hidden behind yards of draped fabric.

They took it all down and painted the room a neutral color within months. They also took the ceiling fan out and replaced it with a giant tree branch wired up with twinkling lights. Not too long afterwards half the lights went out and it was too hot in the room without the fan, so that got put back as well.

On the bright side it didn’t cost them anything and was a fun experience, and they got a couple of new furniture pieces out of it but in the end they didn’t keep any of it the same.

I did this ~15 years ago. Condo in LA.Can’t remember the name of the show. They were advertising on Craigslist. The quality of the renovations and furnishings was extremely subpar. They wanted to have everything done within 48 hours.

Years later, I’ve come to understand that remodels take months, not days. We had to eventually redo everything.

3. Only one of them was thinking ahead.

A family member of mine was on a DIY show called Turf Wars. They basically come in and remodel your and a neighbors backyard and then have a “vote” to see who wins the remodel. The show itself was pretty clear cut, they would come in and give a bunch of orders, take some “candid” shots of work being done and then hang around letting the owner and contracting crew do the work.

The hosts were pretty friendly but just kind of gave orders. The voting though was kind of a joke. They had people from the neighborhood come and check out the backyards at different times and one of the yards was inspected in perfect conditions to let the decor shine with the other was just quickly given a walkthrough.

Both of the yards honestly looked great but the winning house (neighbor, not family member) had been in the neighborhood for a few years while my family had recently moved in so weren’t well known. The problem was the neighbor had a really large centerpiece to their backyard remodel that was a little impractical for the smallish backyard they had, and there was hardly any covered sitting areas so if the weather wasn’t great (and it’s not that great haha) it wasn’t a comfortable area to sit around and either get baked by the sun or rained on.

Less than a year later the centerpiece was removed and the pond cemented over as it was too much upkeep and their backyard fell back to just a cement block, while my family still had the whole backyard setup there as it was much more practical.

They kept it until they moved out about 3-4 years later, not sure if still around but would be surprised if it was removed at all.

NOT ME: but, my two neighbors who were best family friends and lived across the street from each other went on trading places together.

One family got a halloween room…..they didn’t speak to each other for a long time.

My company took part in a very well known British renovation show.We donated £6,000 worth of equipment. They promised good advertising in return for free equipment and labour.

We found out after filming that the producers had asked our 2 largest rival companies to do the work and they said no. We couldn’t understand why they wouldn’t want to get involved in such a good cause.

The families story about why they deserved the work was apparently exaggerated and no one had bothered to research this properly. The show never aired.

There you have it! Most people seem to have had a good experience actually doing the show, but problems cropped up soon afterward.
If you’ve had any firsthand experience we’d love to hear about it in the comments!