Raccoons are known to be a nuisance; nocturnal creatures who ransack garbage cans and ruin gardens to find food are not gonna win any popularity contests. But these evening bandits are not only curious, but very intelligent.

Unless they are drunk.

Recently, The Milton Police Department became hometown heroes when they received a call about a few ring-tailed bandits roaming a community in West Virginia. Assuming these raccoons were rabid, they investigated the scene.

After the police arrived, they examined the raccoons and had a chuckle. “Turns out they appear to be drunk on crabapples.” Fermented crabapples, that is. This night gang partied all hours of the day until the police had to “break it up”.

Patrol Officer Withers caught one on Brickyard Ave, and another was caught by Patrol Officer Scarberry on Highland Ave and Mason Street – with assistance from Sergeant Collins and others. The police quickly detained the drunk and disorderlies, allowing them time to sober up. Do tiny drunk tanks exist?

Later, the detoxed raccoons were sent on their merry way, “released near the woods unharmed.” 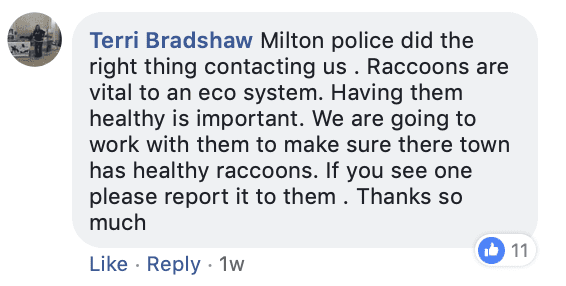 While others were happy to make jokes, as this was all pretty hilarious.

Even though this community was spared from these animals being infected by rabies, please always use caution: “If you see a staggering and disoriented raccoon please do not approach it. It could be sick…”