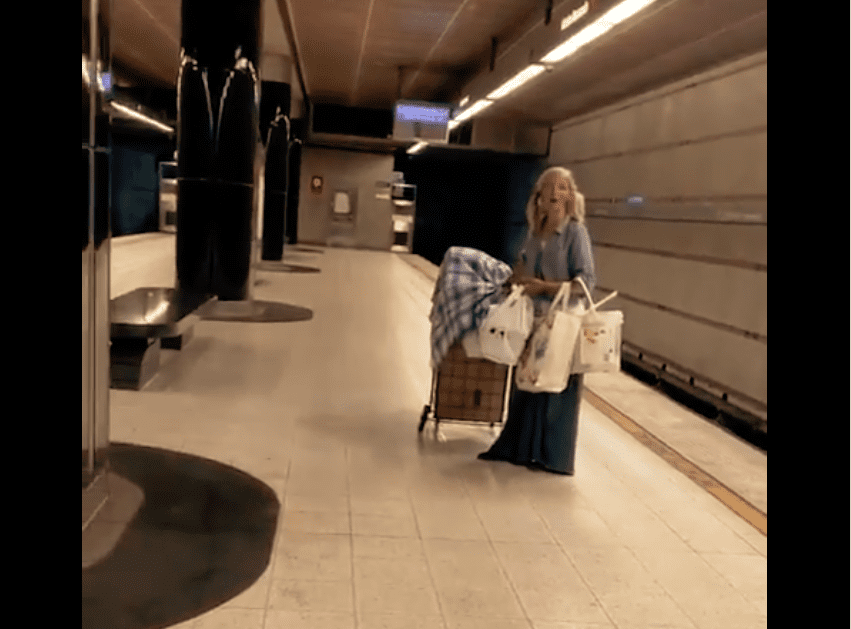 A homeless woman sang a beautiful rendition of a Puccini aria and a police officer filmed it to share with the rest of us.

The LA officer was at his post at the Wilshire and Normandie Purple Line station, recently, when  a woman with her hair in pigtails and holding several bags, and a cart of her belongings, began singing on the platform. Her song was so beautiful, he pulled out his cell phone and filmed her performance with her permission.

Then he uploaded the video to the department’s Twitter account where it was viewed and shared over one million times.

4 million people call LA home. 4 million stories. 4 million voices…sometimes you just have to stop and listen to one, to hear something beautiful. pic.twitter.com/VzlmA0c6jX

Incredibly, the woman was eventually identified as Emily Zamourka, a 52-year-old Russian woman, classically trained in piano and violin.

Zamourka later told reporters she lost her ability to earn a living when her $10,000 violin was stolen from her several years ago. She was also dealing with health issues and sleeping on the streets. She hoped her impromptu, viral performance would help her get into permanent housing.

Consultant Michael Trujillo started a GoFundMe account for her and city council members got in direct contact to ensure she received the money and other help. The Downtown Women’s Center also reached out to Zamourka for housing.

When the police department asked her how they could contribute, Zamourka requested to see Officer Frazier who posted the video.

At their meeting, she cried as she hugged the towering man whose video released a flood of donations and assistance. She was even getting paid singing gigs.

We saw with our brains, but we listened with our hearts.

Her voice continues to captivate our city, and as the offers for help pour in, we asked: “Emily, what can we do for you?” Her answer: “I want to thank Officer Frazier for taking the video.”

Her wish was granted tonight. pic.twitter.com/lH4V51YTZ4

Zamourka was hired by Los Angeles councilman Joe Buscaino to repeat her performance in front of thousands who attended the grand opening of Historic Little Italy in the San Pedro area of Los Angeles.

Many have also offered to buy her a replacement violin but she’s holding off until she can find an instrument closest to the lost one so precious to her.

As offers continue to pour in, including a recording contract, Zamourka feels overwhelmed, but appreciates all the kindness people are showing. All she really wants is to return to her former life as a working artist.

That’s a dream certain to come true for her again soon.