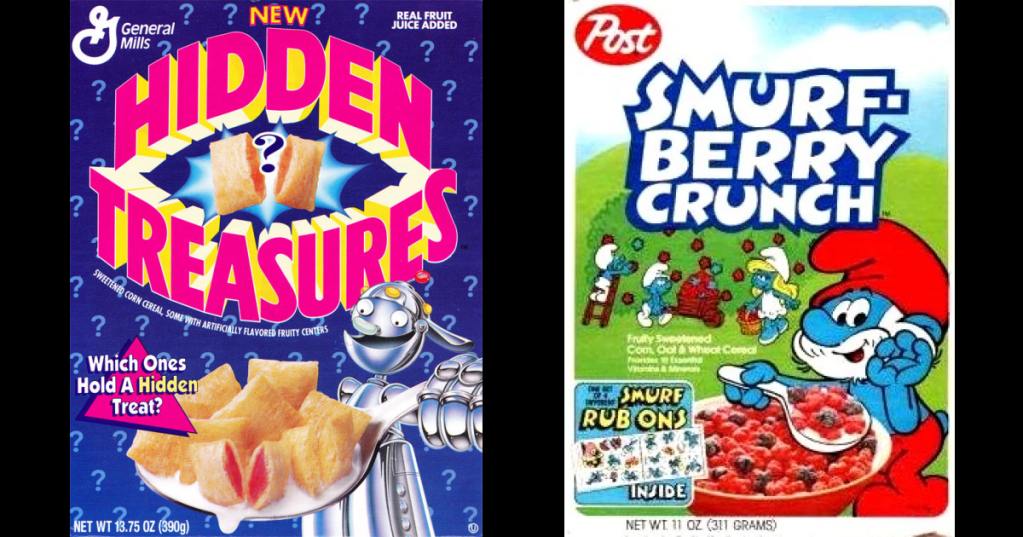 Remember These Discontinued Breakfast Cereals That We All Loved?

If you’re a person who identifies with GenX or the Millennial generation, then you probably don’t even realize how many breakfast cereals have come and gone since your childhood. I know I didn’t until I started to write this article but – commercial after commercial – the nostalgia really started to kick in.

If you’re up for a trip down memory lane, check out these 10 discontinued breakfast cereals and the commercials that are probably lodged somewhere in your ancient memory.

Smurf-Berry Crunch released in 1982 and was fruit-flavored and super colorful…a fact that worried more than a few parents when it turned their kids’ poop blue.

Better than red, but still.

In 1987 the cereal was replaced by Smurf-Berry Crunch, but neither version survived to see the 90s.

General Mills was after not the perfect cereal with Crazy Cow, but after the perfect sugary milk left behind once it was gone.

Crazy Cow cereal was coated with a sweet powder that dissolved when wet, with options like strawberry and chocolate so everyone could choose their favorite.

Sadly, it only lasted a couple of years, so 80s babies never even had a chance.

With the recent popularity of Ghostbusters, I’m surprised that these haven’t made a comeback, to be honest – the 1985 release of this cereal stuffed with ghost-shaped marshmallows was a fairly popular tie-in.

It stuck around for 5 years, and yes, you might have seen a brief revival back in 2021, if you were lucky enough to snag a box.

Frosted Flakes has tried more than a few special flavors over the years (the recent marshmallow edition has been a favorite in our house), but the early 80’s Banana Frosted Flakes really resonated with cereal lovers everywhere.

The flakes were adorned with pieces of real banana, which maybe convinced parents their kids were getting something healthy along with their double helping of sugar.

In 2019, Kellogg’s released a limited-run Banana Creme Frosted Flakes flavor that was a hit as well.

The fall of 1993 saw the release of this star-shaped, sprinkle-covered cereal. The box featured a cartoon genie as a mascot, a clever way to capitalize on the success of Disney’s Aladdin the previous year.

I’m sure the fact that Dom Deluise was no Robin Williams had nothing to do with the fact that Sprinkle Spangles only lasted two years on the market.

Listen, this one makes a lot of sense to me, because who doesn’t love waffles?

It turns out not everyone, because despite the fact that people really seem to take to cereal shaped like other items, these blueberry and maple flavored tiny waffles never really flew off the shelves.

They were discontinued in 1982, but are remembered fondly by those lucky enough to go through a box or two while they were available.

General Mills probably figured that, since people loved cookies for breakfast, ice cream was a lock – but they were wrong.

Ice Cream Cones was available in both vanilla and chocolate chip flavors when it released in 1986, but it lasted only a year on shelves – except for a brief comeback in 2003 to celebrate the ice cream cone’s 100th anniversary.

Anyone who loves cereal probably keeps some kind of Pebbles in their cabinet – maybe Fruity, maybe Cocoa – but back in the late 90s, you could have added the Flintstones branded Cinna-Crunch Pebbles to the mix.

Cinnamon and breakfast cereal is often a winning combination, but Post stopped making these in 2001.

Every bite of Hidden Treasures cereal is meant to be mysterious – your crispy corn square might be plan, or they might contain a filling that was cherry, grape, or orange.

I’m not going to lie, I wish it was 1993 again so I could go on a cereal adventure of my own – there are too few mysteries in life!

In the early 90’s, Kelloggs debuted this cereal, which is what it sounds like – a cereal made from mini cinnamon rolls (but not soft).

They replaced it with Mini Swirlz Cinnamon Buns in 1993, and those stuck around until 2009, when they were pulled for good.

Ahh, are you feeling the nostalgia?

If you could eat one of these cereals again (or try it for the first time) which one would you pick? We want to know down in the comments!