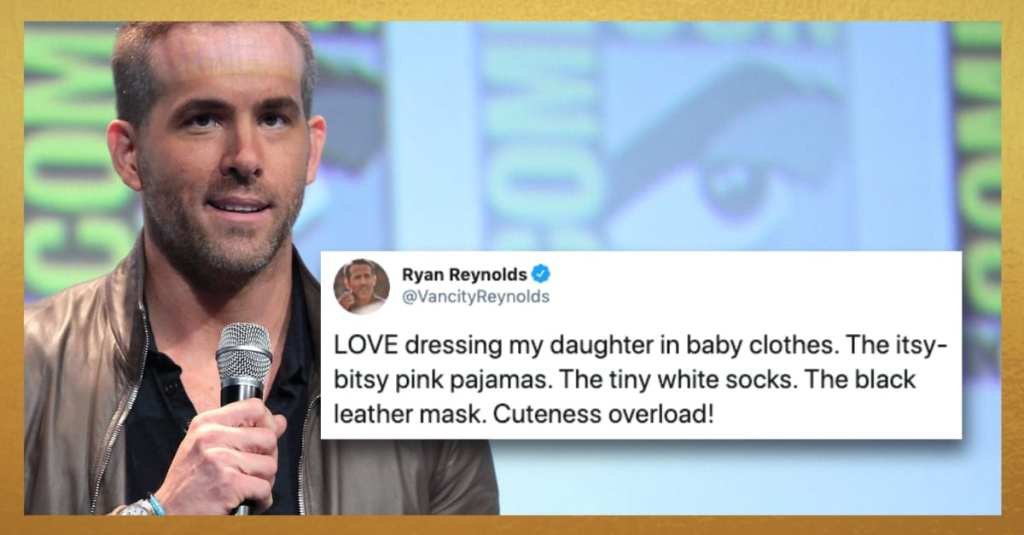 15 Ryan Reynolds Tweets About Parenthood That Are Hilariously True

Think kids suck up your sense of humor? Not for Ryan Reynolds. If anything, being a dad to three daughters has only made him more funny. And he loves to (over) share on Twitter about his every thought and feeling on his role in the family.

Here are 15 of Reynolds’ hilarious, and often totally inappropriate, tweets on fatherhood.

1. Gee Ryan, reading Goodnight Moon to her works too.

I'm teaching my daughter that the sun goes down each night because it's mad at her. Probably gonna write a book on parenting at some point.

2. That’s why she blows spit bubbles at you.

Nothing better than spending an entire morning staring into my baby daughter's eyes, whispering, "I can't do this".

3. Chill dad, she can only improve.

My daughter's only 6 months old and already drawing. I'd hang it on the fridge but honestly, it's absolute garbage.

4. Babies only want the keys, not the whole car.

Totally caved and tossed my daughter the keys to the car. She looked really happy as they bounced off her tiny infant face.

The mobile above my daughter's crib is just a whole bunch of NuvaRings. So she remembers how lucky she is.

Nothing better than the simple joys of finding 5 bucks in an old pair of pants, or discovering my wife and I had a second daughter over a year ago.

7. He probably has dozens of those little black masks.

Put the baby down in her crib tonight. She scrunched her nose so cute, giggled, then turned into thousands of bats.

Tinder isn't a babysitting app. Apologies to Crystal and Janine for the misunderstanding.

Healthy Parenting Tip No. 34: Get the child into showbiz as soon as possible.

What's better than a 12 hour drive with a screaming 1 year old? Not including hepatitis.

After this morning's diaper, my daughter finally earned the teardrop tattoo on her face.

14. He likes to make up his own nursery rhymes.

Love writing nursery rhymes for my daughter. Her favorites are, "Sunshine-Cuddle-Time!" and "Everyone You Know Will Eventually Die."

15. Unforgiveable, if not totally made up.

My daughter loves being buried up to her neck in sand at the beach. Her little face lights up when I come back to get her the next day.

Ryan Reynolds is one, ahem, dad alright. If there was a Golden Globe for fatherhood, I bet they’d let him see it.

All kidding aside, I’m imagining there’s never a dull moment when Ryan Reynolds is your father. He takes Dad Jokes to another level and we parents are thankful for the laughs.

Let us know your fave tweet in the comments!