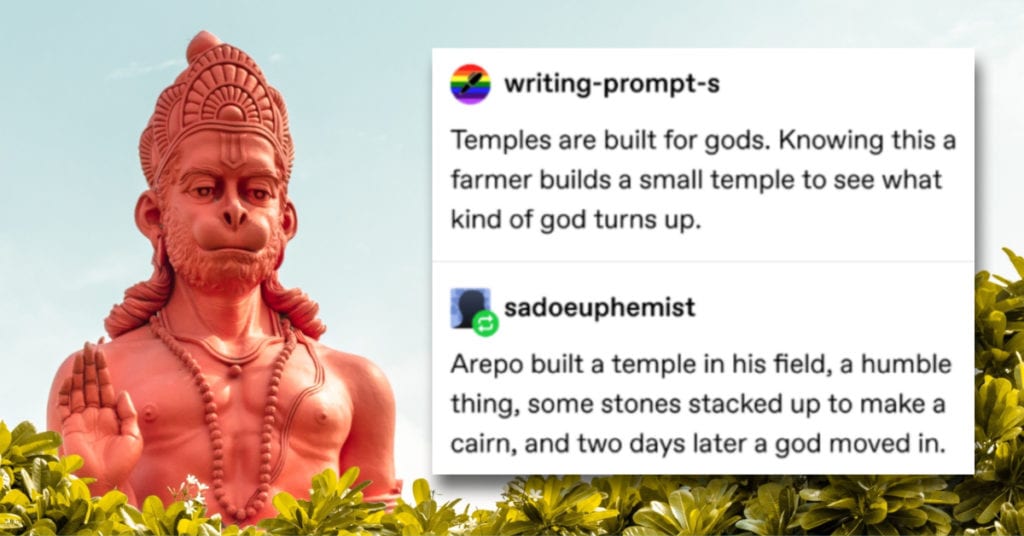 Tumblr Recounts the Story of a Selfless Farmer Who Served Others

We all love to read an uplifting story about someone who is just working to serve others, and Tumblr recently served up an excellent tale.

This story of a selfless farmer who stays humble is heartwarming. You will definitely come away from reading it feeling a little better about humanity.

The story began based on a simple writing prompt: a farmer decided to build a small temple on his land to find out what kind of god would move in.

People on Tumblr collaborated to create a story that is thoughtful and moving. 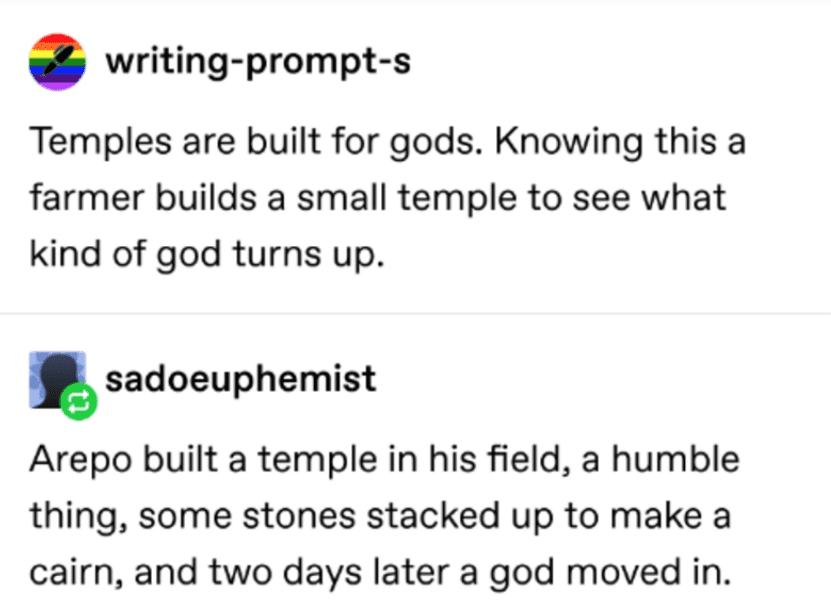 The farmer didn’t have a lot of material to begin with, but he put his best effort into building something that might be worthy of a god.

The farmer, Arepo, acknowledges that the temple isn’t grand, but hopes that it will be satisfactory. 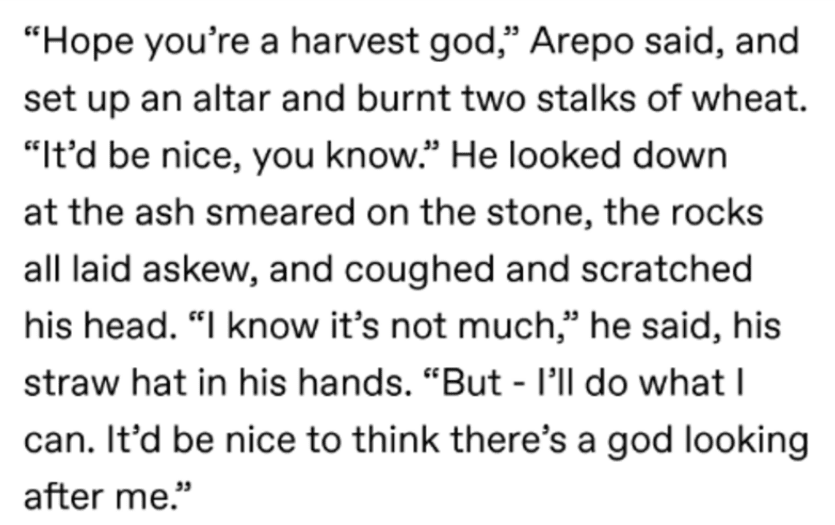 The god suggests that Arepo find a “real” temple where he can ask for guidance, and then explains that he is not a god who can help with the harvest, and that he’s not even sure he’s a god worth praying to. 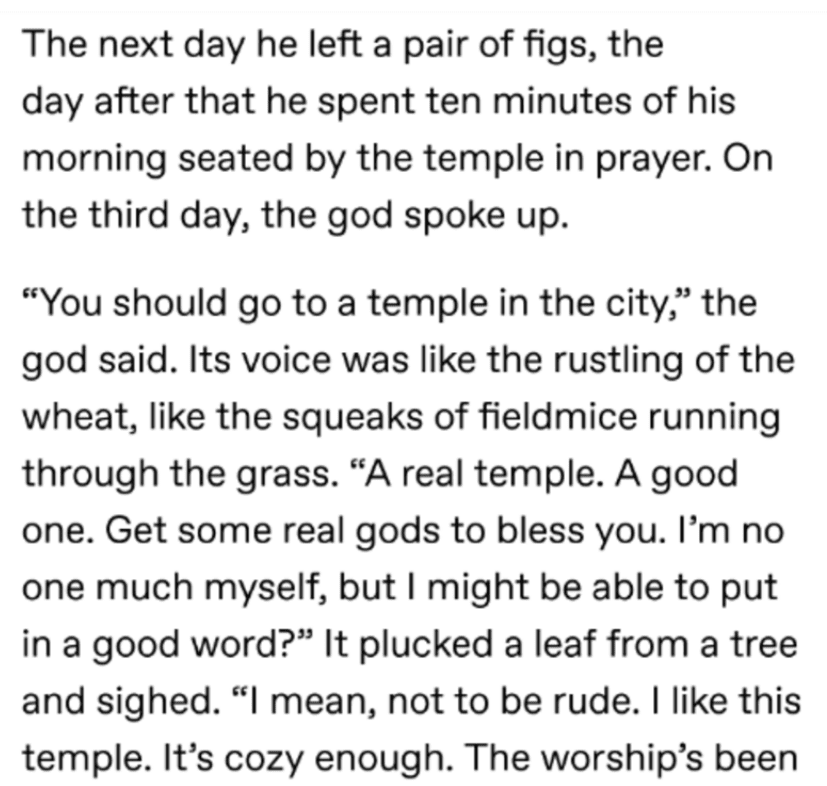 “But you can’t honestly believe…” 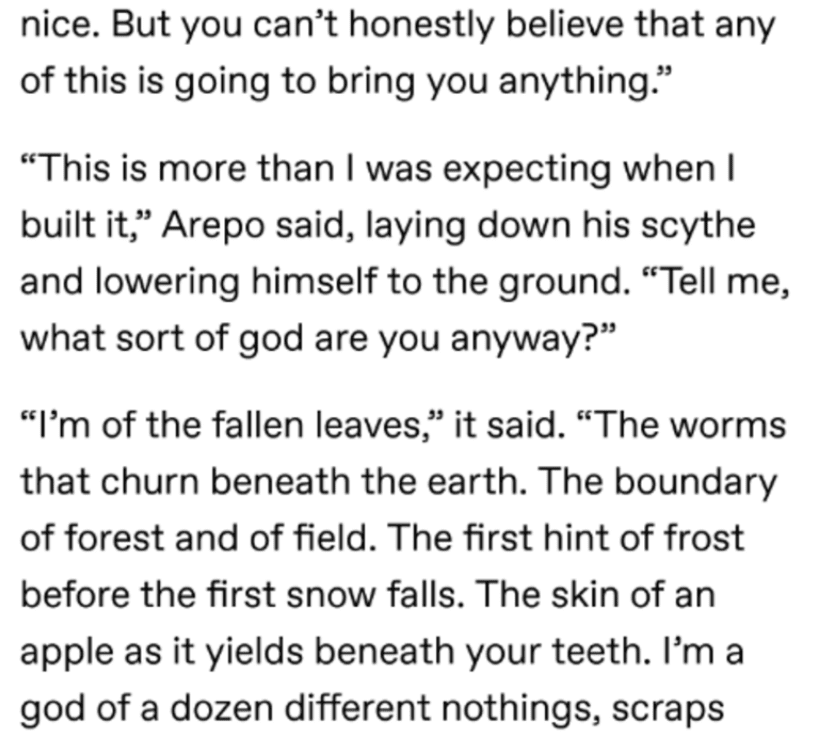 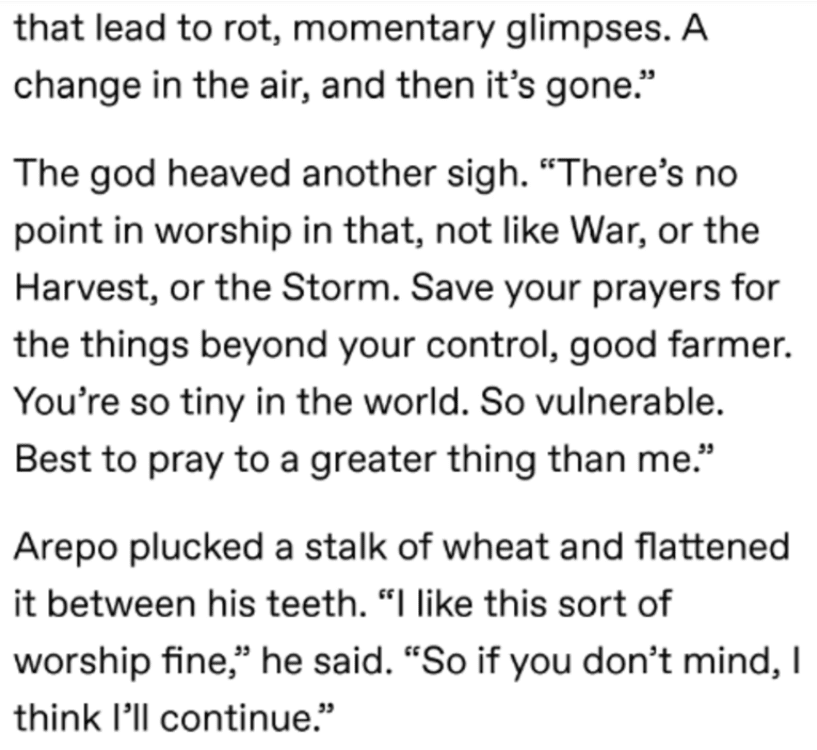 Arepo and the god began spending a lot of time together in silence.

Tragically, Arepo’s land and even the temple are destroyed, and the god questions Arepo about why the temple is so important. 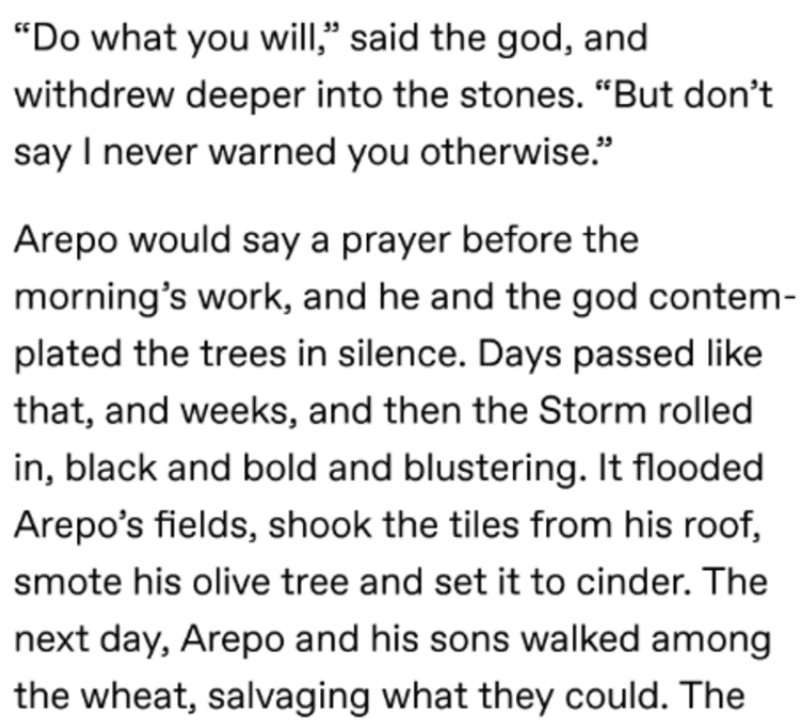 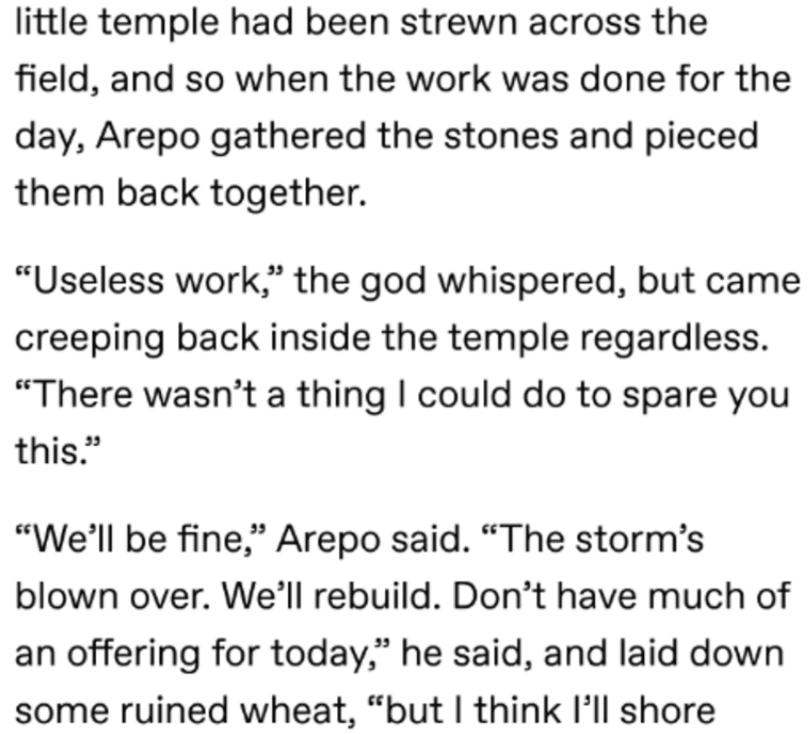 “The god rattled around in the temple and sighed.”

“Arepo came and sat by the temple…” 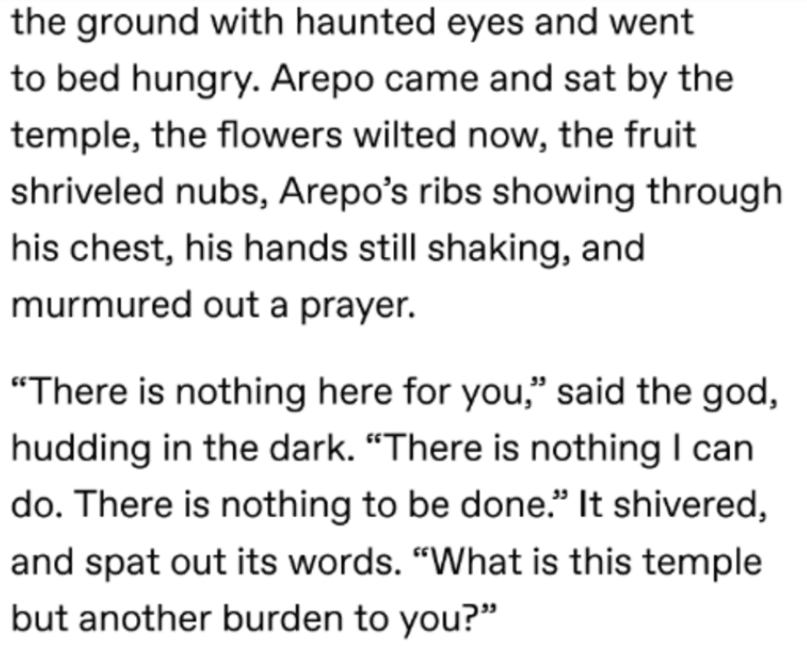 Arepo struggles for a moment but then realizes that he can face this burden because he has faced similar burdens before. 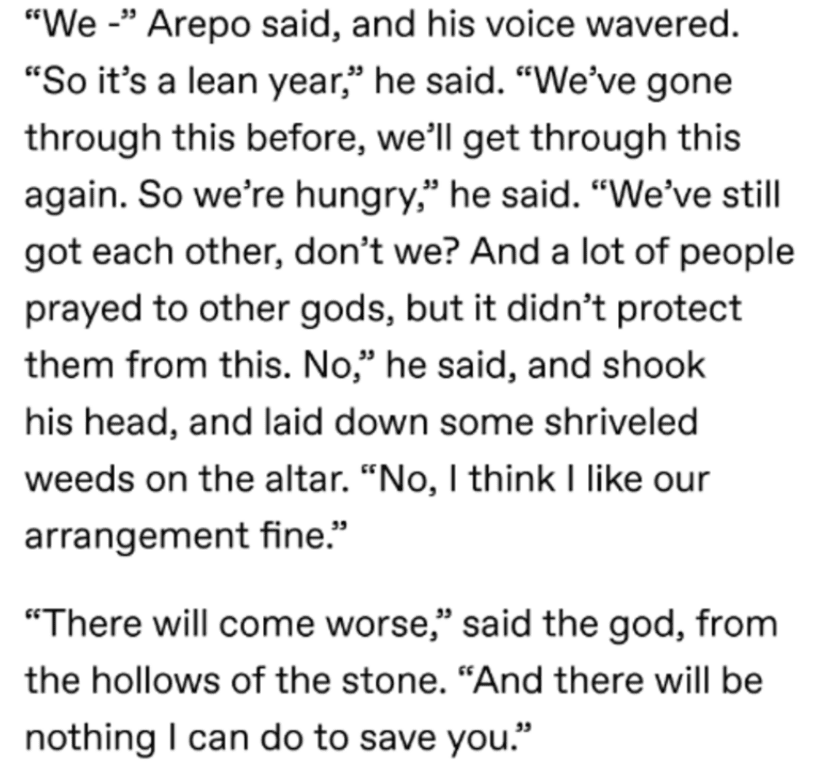 Arepo decides to press on, and ends up having an even worse year.

War comes to the land were Arepo lives. 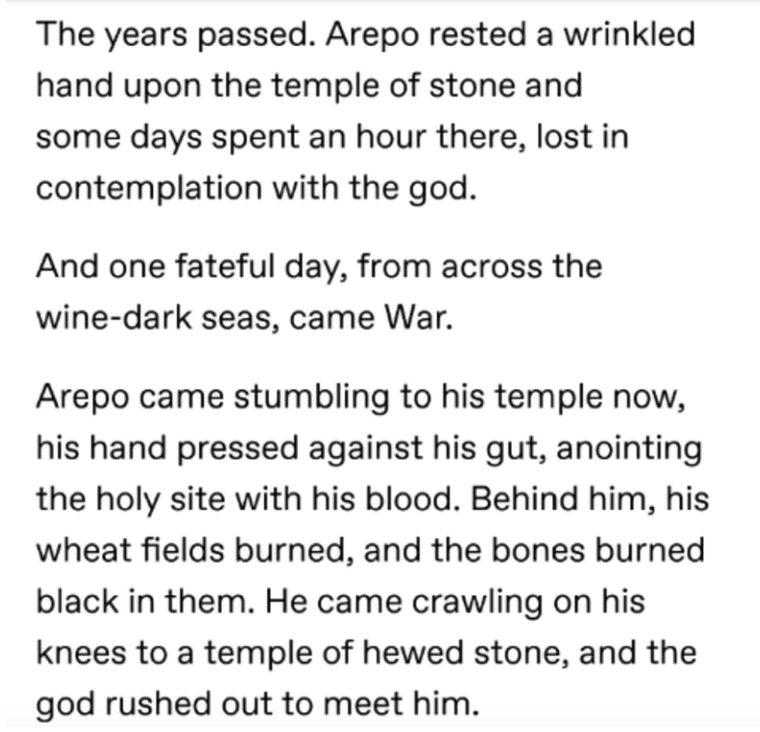 The god also feels like he’s failed, as he tragically cannot even save Arepo. 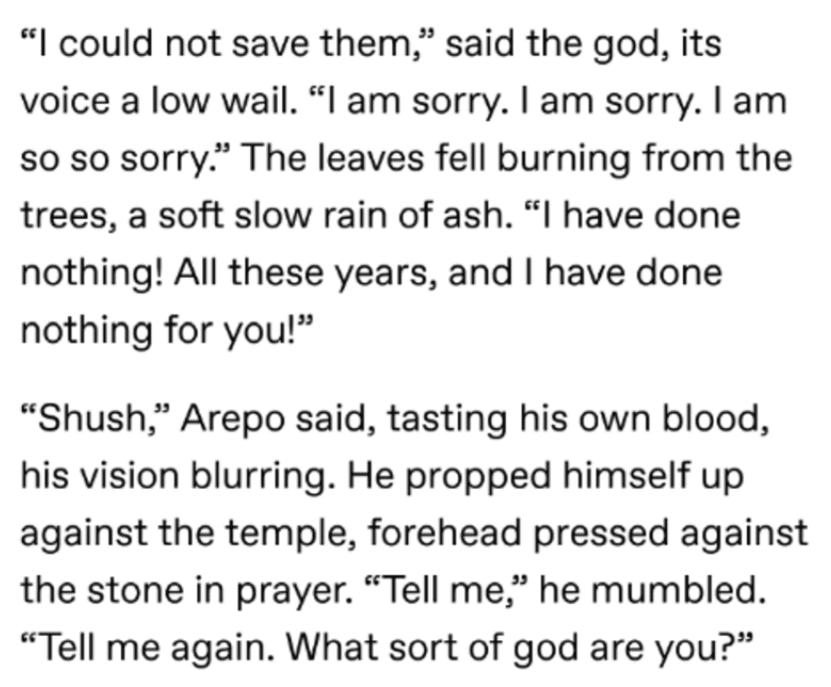 The god opens up to Arepo, and tells him a little more about who he is. 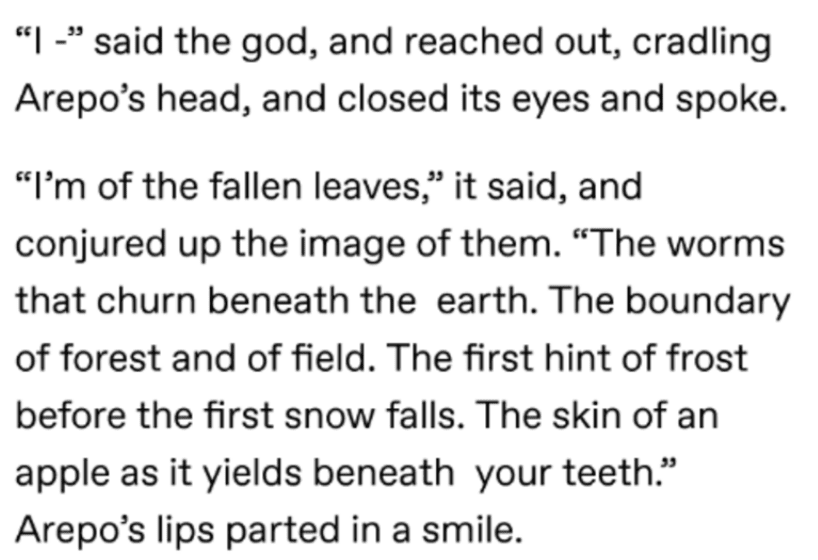 “I am the god of a dozen different nothings” 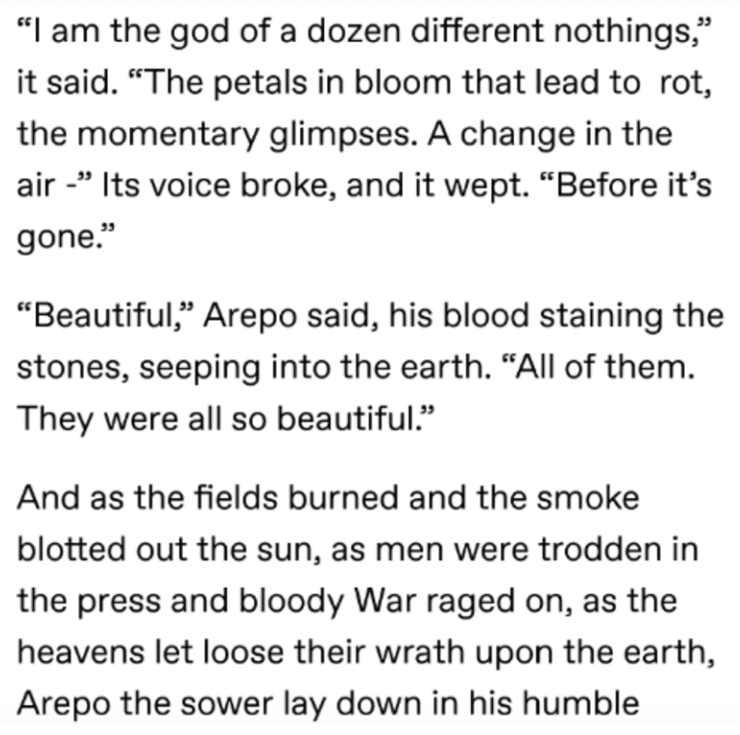 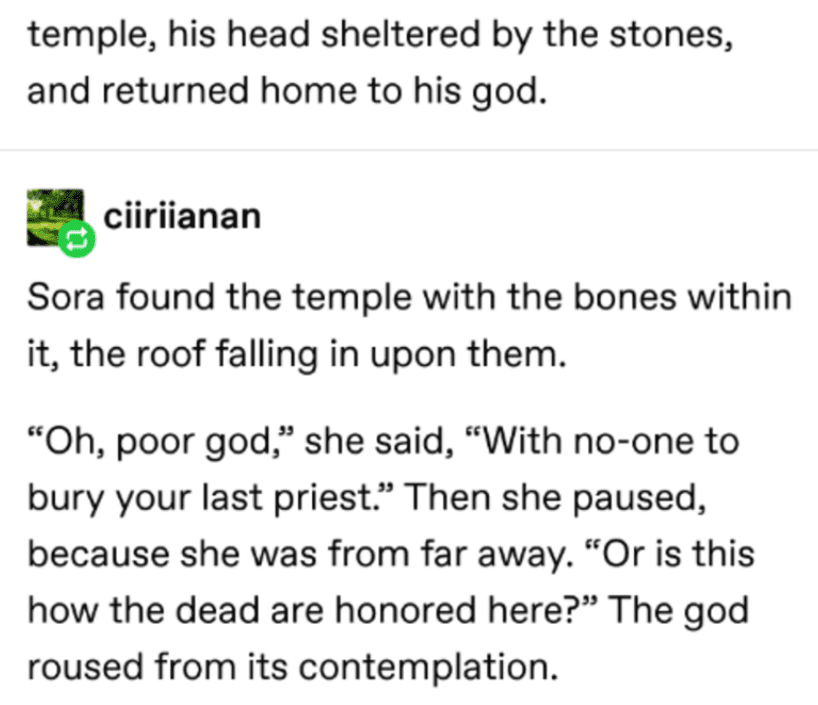 The god wanted to honor Arepo, and soon found a way to do so. 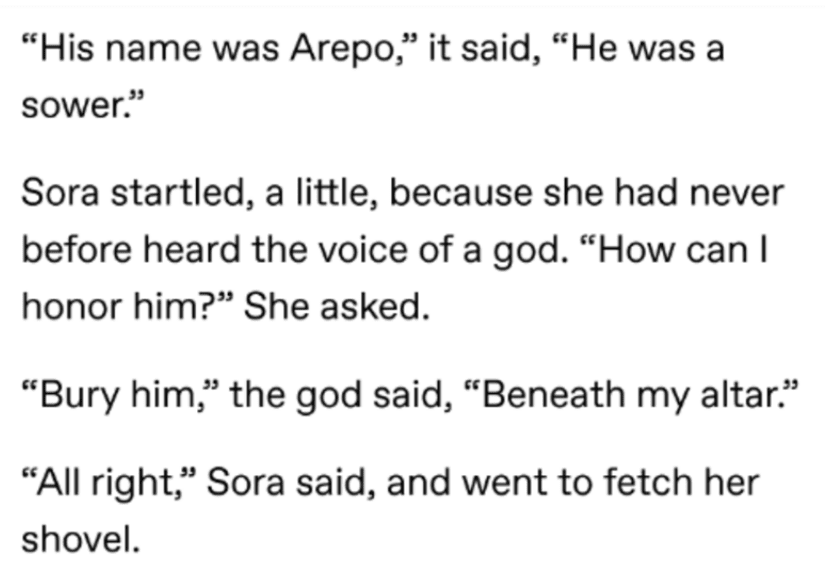 The god is completely demoralized at this point and has no idea how he can really be useful. 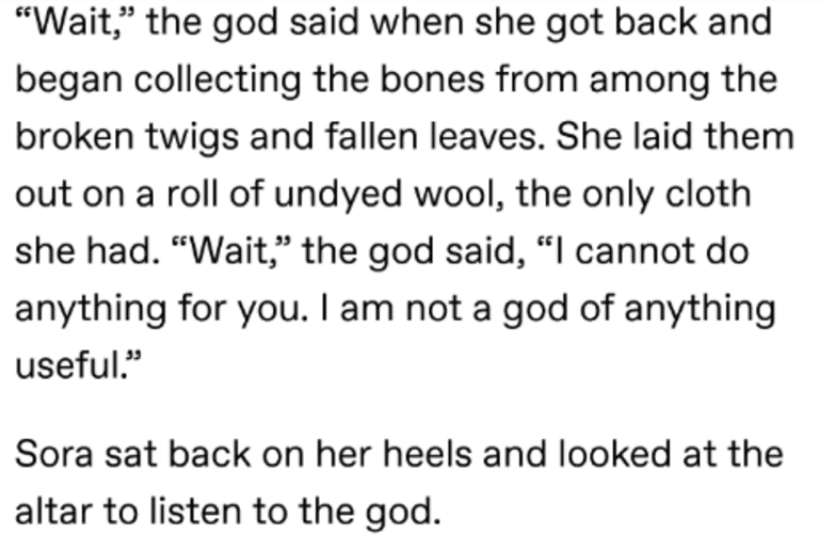 Arepo begins to list the ways he feels he’s failed. 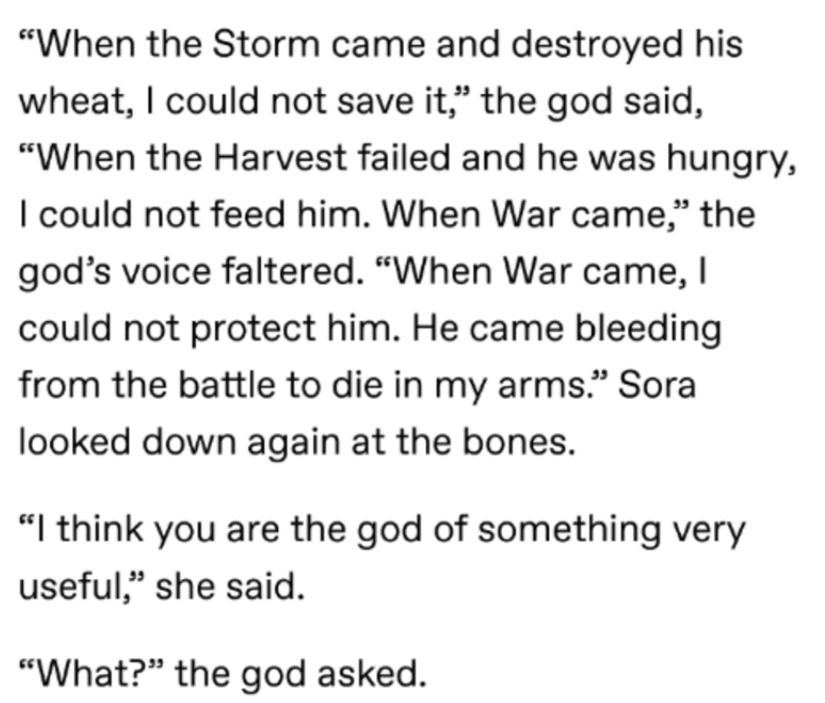 Time began to move on, and the town began to recover. 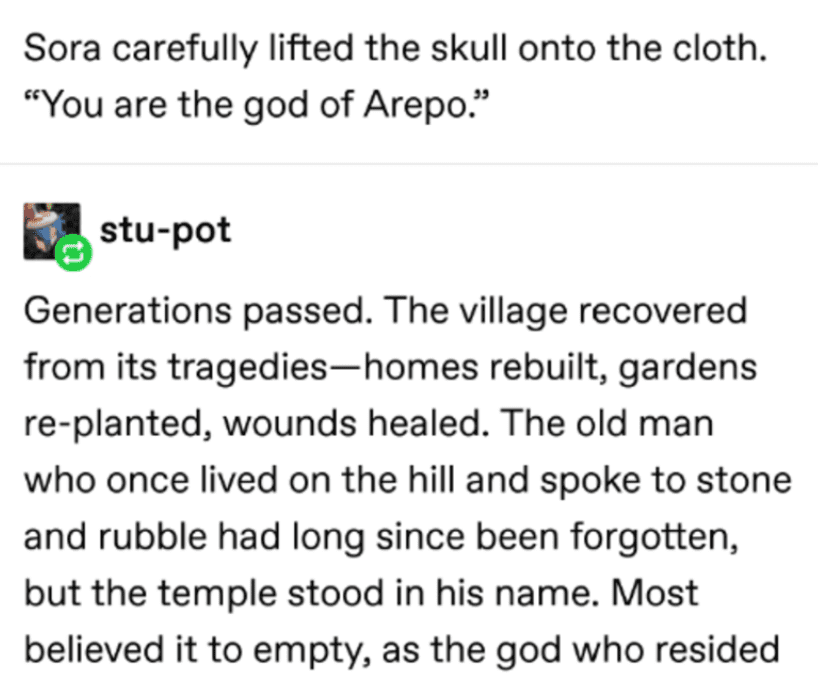 “Yet, any who passed the decaying shrine…” 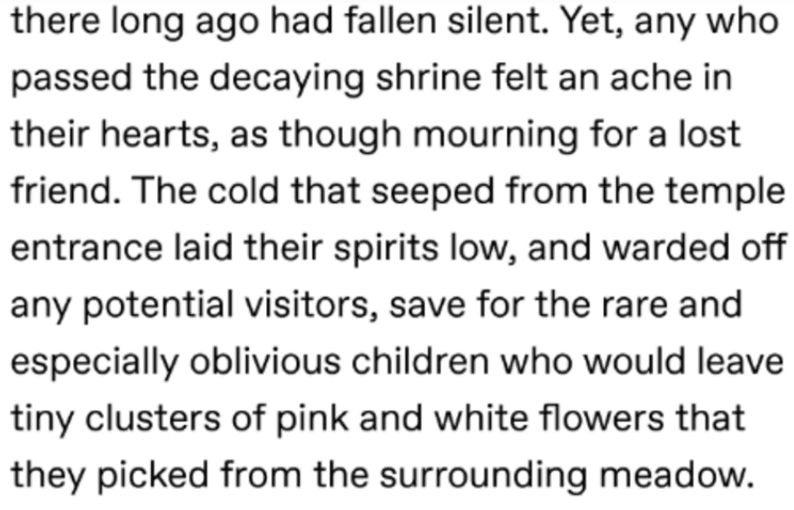 The god now spends his time contemplating the meaning of the new world he finds himself in. 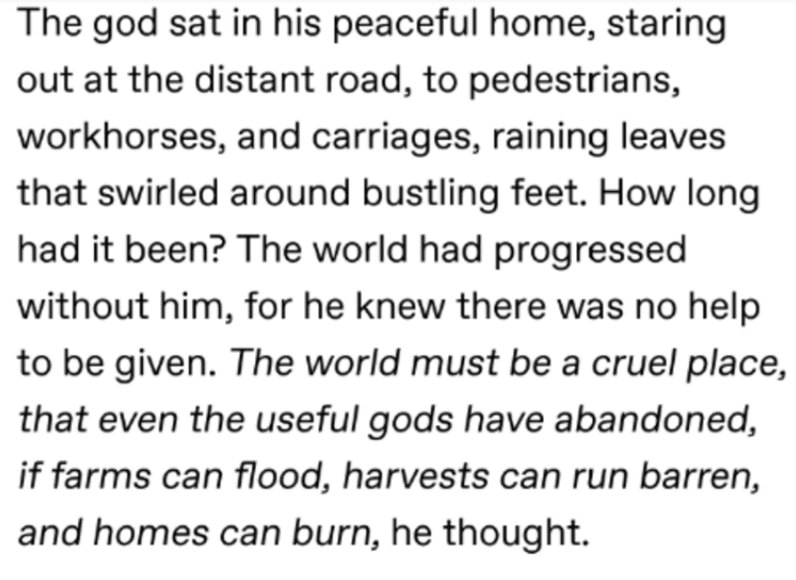 He also begins to contemplate humans, what the true meaning of humanity is. 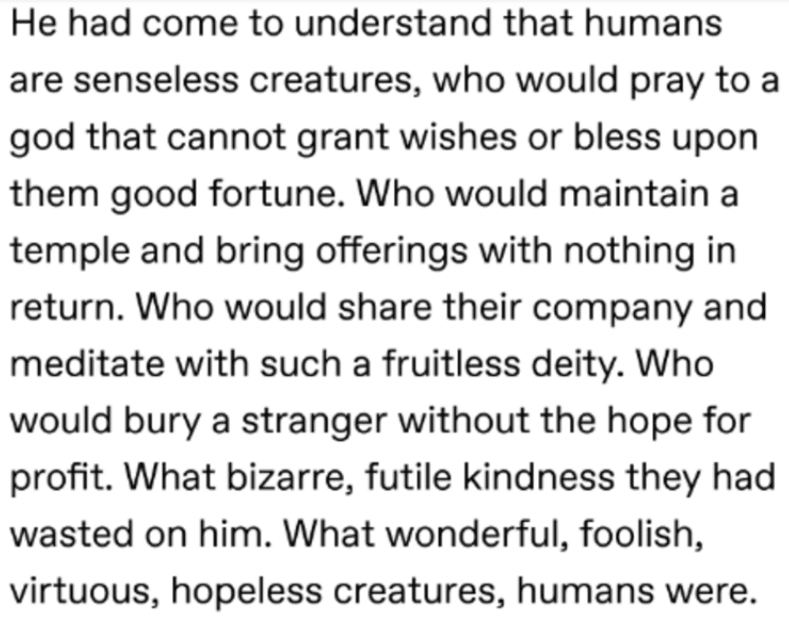 The god decided to celebrate everything that humanity represents by beautifying the world around him. 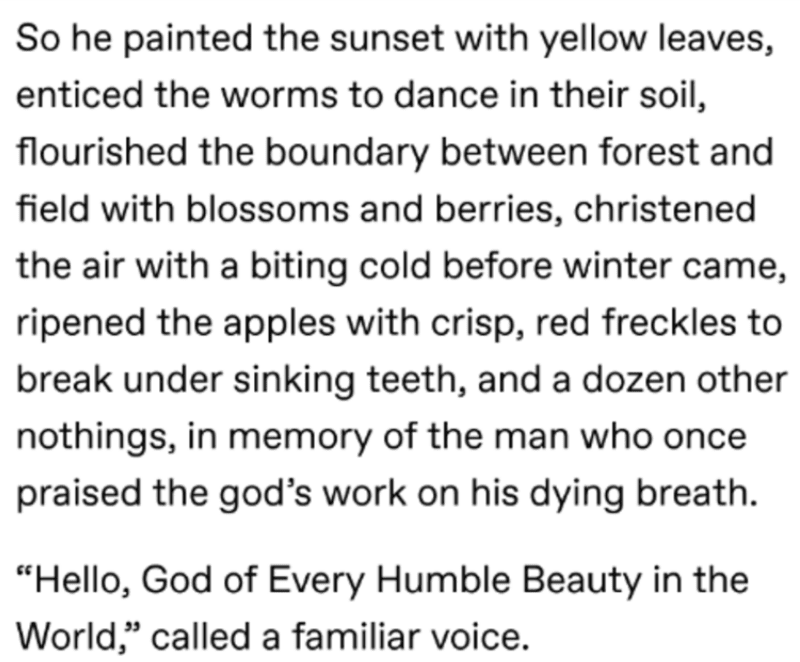 And then, the god gets an unexpected visit. 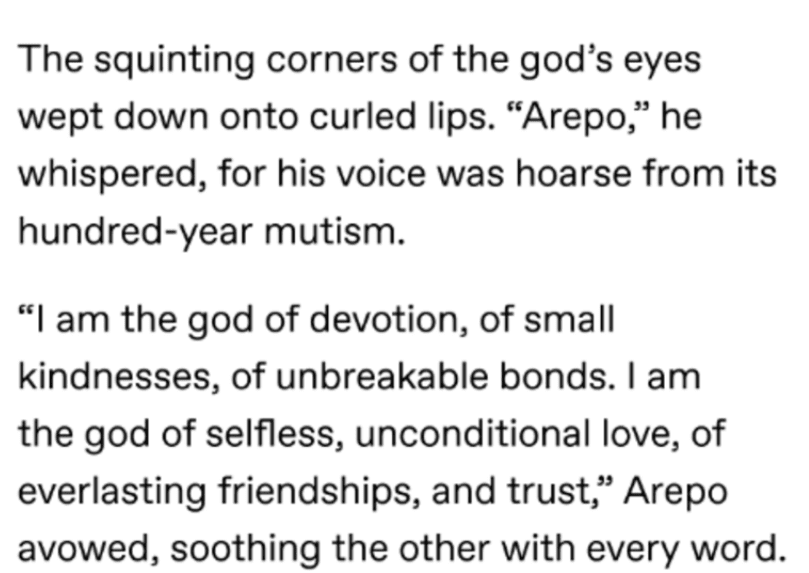 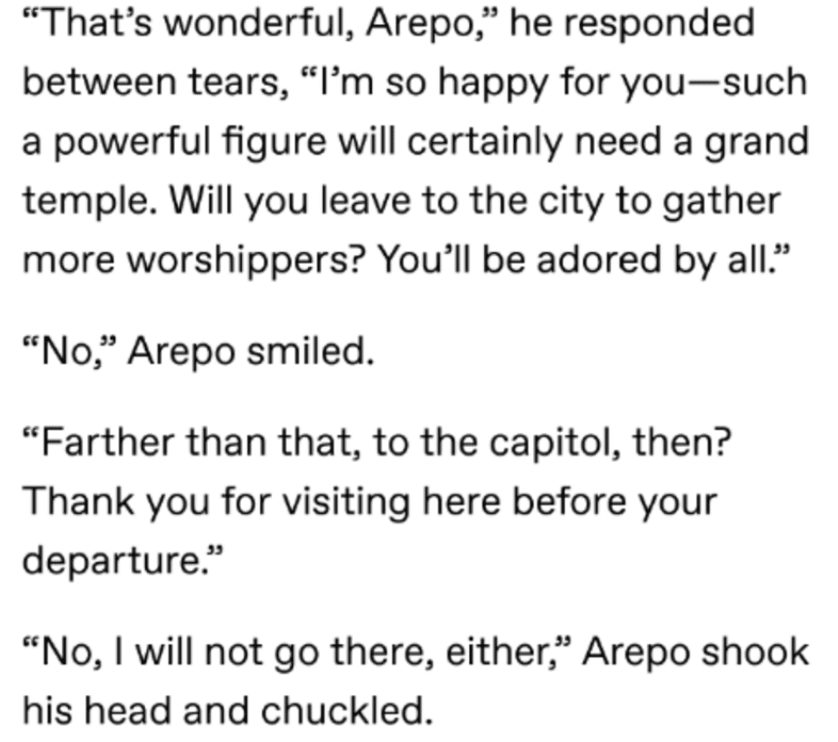 And then… everything really comes full circle. 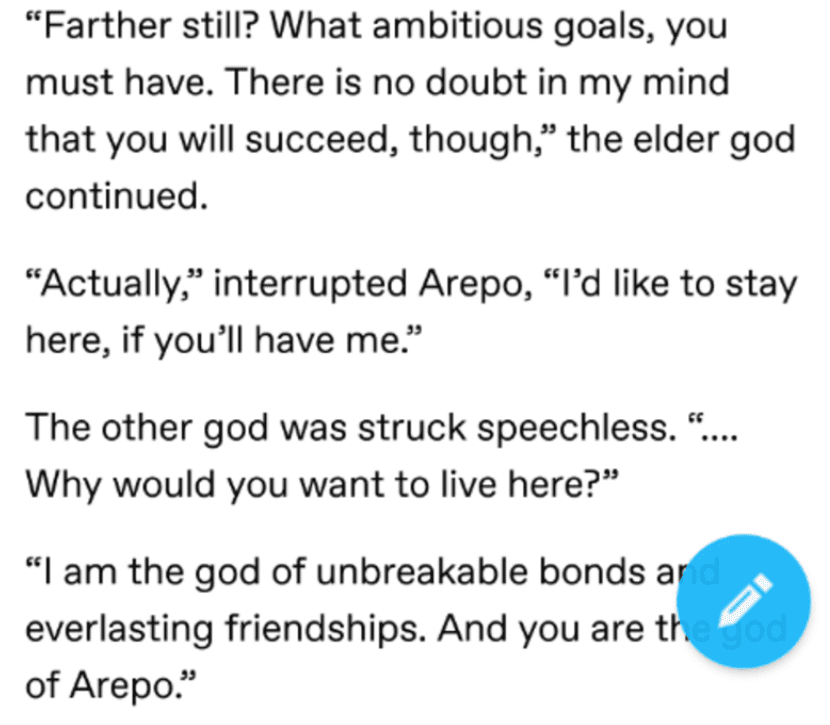 Don’t forget to share this post with your friends, and let us know what you think about Arepo’s choice in the comments.