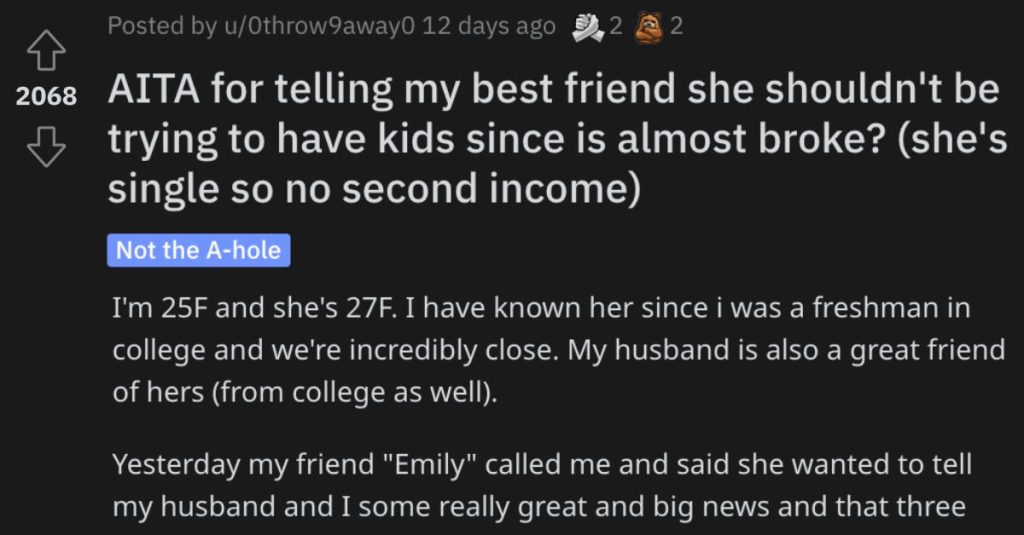 She Told Her Friend She Shouldn’t Have Kids Because She’s Broke. Was She a Jerk?

I’d venture to guess that roughly 99.99999% of people don’t like to be told what to do when it comes to their kids…or their future kids if they don’t have any yet.

And today we’re gonna hear a story from Reddit’s “Am I The A**hole?” page about a woman who wants to know if she was out of line for giving her best friend a piece of her mind about kids.

AITA for telling my best friend she shouldn’t be trying to have kids since is almost broke? (she’s single so no second income)

“I’m 25F and she’s 27F. I have known her since i was a freshman in college and we’re incredibly close. My husband is also a great friend of hers (from college as well).

Yesterday my friend “Emily” called me and said she wanted to tell my husband and I some really great and big news and that three other close friends of ours “Jack”, “Dave” and “Jill” were also coming over to my house so that she could tell us all together.

So we all got together at my place and she sits us down and hands us little bags. She asks us to look inside and all of us were shocked to find a cute onesie with the words “I’m going to be a mom! <3”

We were all so stunned, and finally Jill asked Emily who the father was and Dave asked how many weeks it had been since she had known. I knew she planned on keeping it since the onesies were decorated so she was happy. That’s when she told us all that she want not pregnant yet but soon would be. Jill spoke up again and asked her what made her want one and she said she always loved the idea of having a child.

Jack asked her if she would adopt or not and Emily said no she wanted to be pregnant. So I said “oh so something like a “sperm clinic” thing? and she said exactly this “no, that it’s too expensive so i’m just going to find a guy to have s** with me without protection until i’m knocked up, kind of like a friend with benefits situation”

Needless to say we all started to tell her it was a bad idea. That’s when I told her about the money thing. She does not have a great paying job (comfortable but not enough for a baby) and i mentioned that. The thing is, it’s a touchy subject for her because her situation was due to the pandemic. (she had a great job before but had to be let go). She said she didn’t care and started crying and called us all bad friends and left.

I’m the person Emily’s the closest to. I talked about this to her today morning and she said she no longer wanted me as a friend (along with the others) because when she needed support I insulted her. She also said her biological clock didn’t have much longer so how could she not have kids now.

That kind of made sense to me and now I feel so guilty. Maybe I should’t have told her about the money thing (which is what she was most upset about) and should have just offered help or support. That point of her not having much longer to have biological kids just increased the guilt I felt, especially since I know this feeling, i’m a mother. She h**es me now (more than the others since we were super close) and now i don’t know if I was in the right anymore.

This reader said that sometimes, financial advice can be harsh…but necessary. 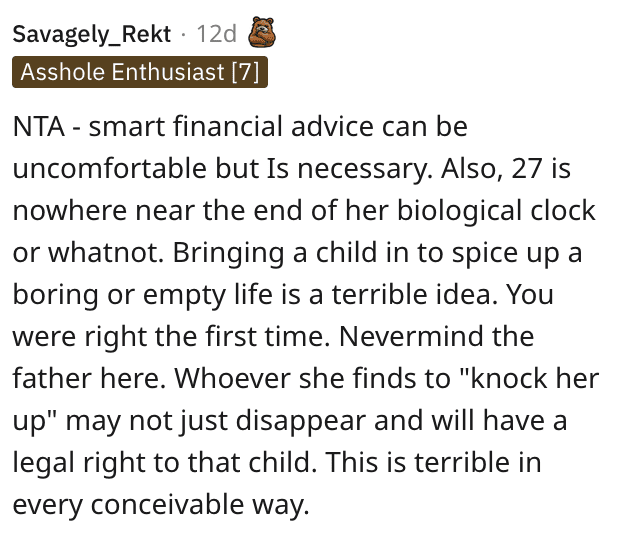 Another person said that this woman seems emotionally immature and probably isn’t ready to have a child. 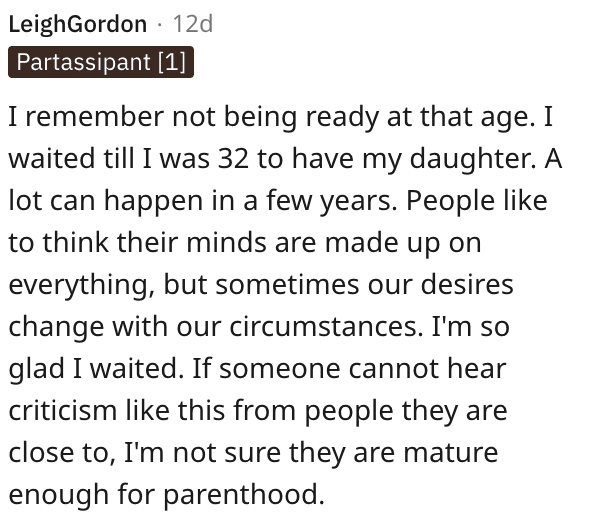 Another Reddit user argued that it doesn’t even sound like this woman is fit to own a dog, let alone have a kid. 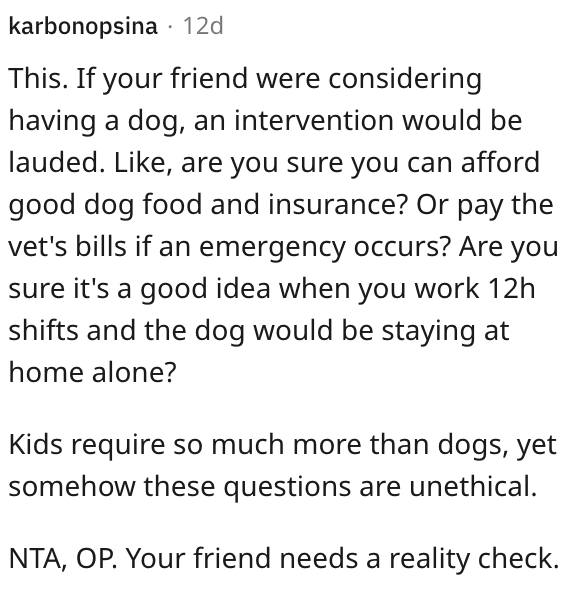 And finally, this individual said that the woman sounds like she’s not ready…for a number of reasons. 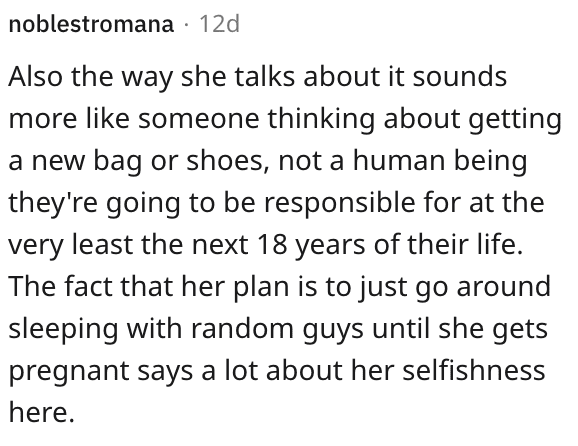 Do you think this advice was way too harsh?

Or did she do the right thing?