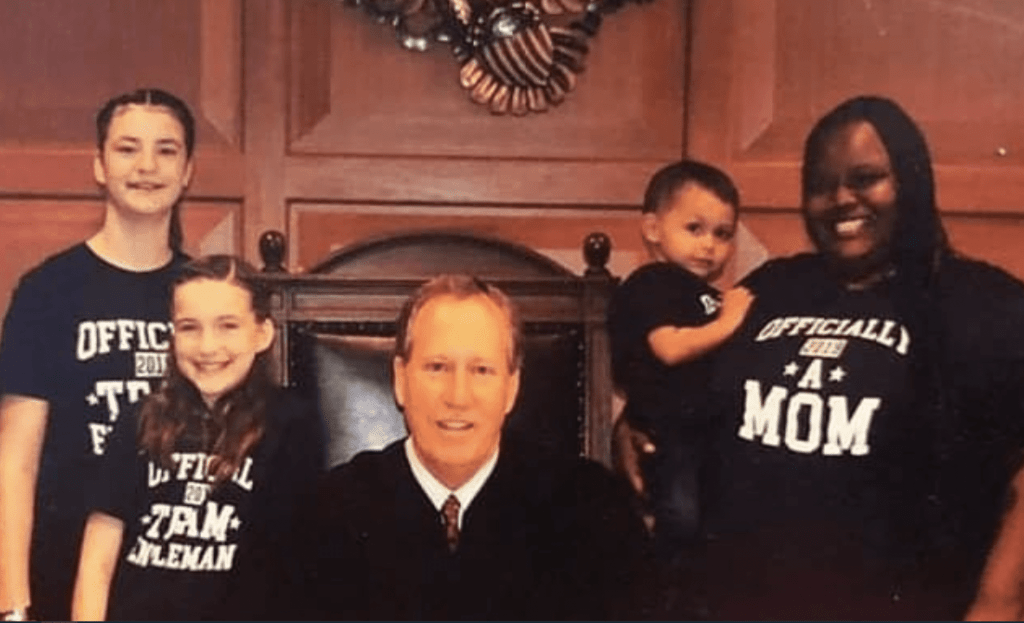 Even though Treka Engleman grew up without a mother, she says being a mom seemed to come naturally.

Engleman was only 6 years old, she wrote in an essay on Love What Matters, when her mother passed away, but with 10 older brothers and sisters, there were always nieces and nephews to babysit, along with the younger kids in her neighborhood.

All my nieces and nephews except the oldest! I love my babies!!!

Then, she became a foster mother and three children came into her life and never left.

“For years, I wanted to be a foster mom.

Yet I was always hesitant to start the journey into foster care because I didn’t think a single person like myself could be a foster mom (no spouse, no children). I didn’t think I would qualify, but I did some research, asked around, and made some phone calls anyway.

As it turns out, you just have to be at least the age of 21, you can be single or married! I talked to my family about it and I just decided I was going to go for it!

At the time, I was rooming with my sister when I decided to get a two-bedroom apartment of my own and start the process.”

It was hard work and lots of classes, but soon she was certified to take in children who had no families of their own. The stories she heard while she was training haunted her and she wanted to take them all. Black or white, it didn’t matter to her, as long as she could give them a safe, clean and loving home.

“Classes continued and I was getting close to the end. I had to make a decision of what sex, race, and age range I wanted to foster. There was never really any question of the matter.

I immediately marked African American and Caucasian. Color doesn’t matter to me. Love is love no matter what color you are. As for the ages, I thought maybe I’d do ages four and five. After my classes were over, I had my home study and I was approved for up to four children. I

thought, ‘Woah…that’s a lot! Am I ready for this?’ But I was ready and I knew in my heart I could do this. Now it was go time!”

As she waited for her placements, she decided she was also willing to take babies. The day after she informed her caseworker, a 5-day old infant named Elijah was brought to her home. Soon after, a little girl, Alexis, arrived. But her sister, Mercedes, had to remain in a group home as a result of some trouble she caused. Even so, weekend visits were regular so the girls could stay in touch.

Meanwhile, Elijah was growing up and the little family needed a bigger place to live, especially because Mercedes would be moving in with them soon. Engleman was determined to keep everyone together. Even though the kids ranged in age from 1 to 15, they all loved each other just like family. When strangers asked if she was a babysitter for the kids, she would tell them the kids were hers with zero explanation. Because to her, they were her kids and she didn’t see them in any color–only love.

“When the children found out they could be adopted, I asked them if it was okay if I adopted them.

No one had to think of their answers; it was an immediate YES!

We talked to the caseworker about adoption and she never had a doubt in her mind that we would be together forever.

She kept asking, ‘Where have they been hiding you?’ We were all so excited for this process to begin.”

After a lengthy and invasive process, the adoptions were made official. It was a long road, but every questioned answered, interview conducted and form completed was all worth it when on November 1, 2019, all three children became part of Team Engleman.

“Love has no color in my home and they are loved unconditionally.”

Englewood urges anyone who is thinking about fostering to “go for it.” If you have the desire to help a child, you’ll never regret bringing one into your home and your heart.