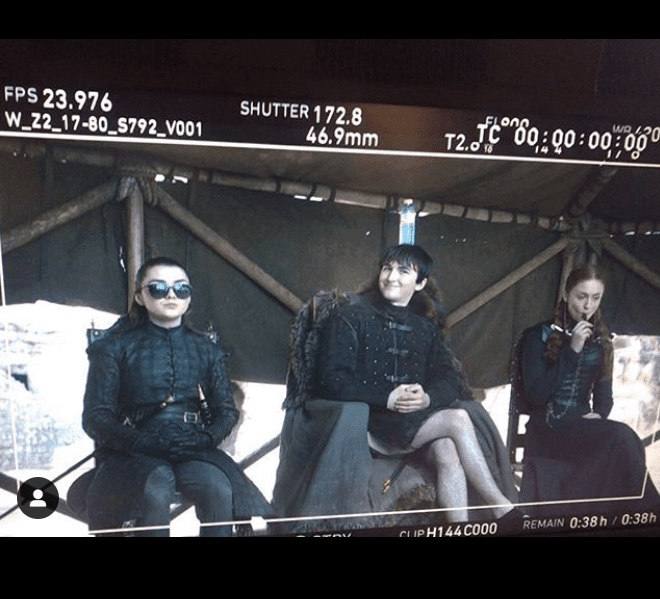 Suffering from Game of Thrones Withdrawal? Perhaps These Photos Will Help

Regardless of your opinion about the final season of Game of Thrones (and let’s face it, you have one), it’s tough to let go of a show you’ve loved for so long.

Fortunately, the cast shared some fascinating behind-the-scenes photos that will help you remember the good times.

Here’s one Gemma Whelan (Yara Greyjoy) took of the cast:

Who is that new make-up chap? Why it’s Kit Harington, aka Jon Snow, the show’s hero. Who apparently took up make-up between scenes. One clever commenter summed up the picture brilliantly: 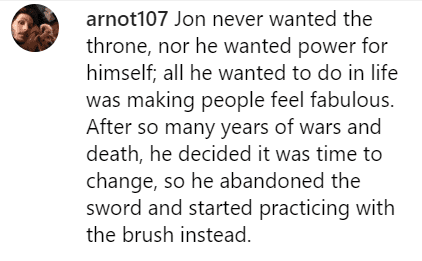 Gwendoline Christie (Brienne of Tarth) posted this Instagram pic, highlighting what she learned from playing Brienne.

THANK YOU. There is no other way to start this. @gameofthrones has changed my life beyond anything I could have comprehended. Playing Brienne of Tarth has redefined the way I look at the world, women and particularly myself. I have never felt so exposed by a character, but happy knowing that those feelings of discomfort were about shaking off convention and embracing strength and authenticity. This photograph was taken on my very last day saying goodbye to my friend Ciaran, he worked on the show from the beginning as an AD and was the first person I met on ‘Game of Thrones’ – he treated me with respect, kindness and great humour every single day. I shall miss seeing his smiling face in the misty dawn mornings, warmly welcoming me to set. I shall miss everyone that gave so much of themselves helping to create ‘Game of Thrones’; it was a privilege to work with such talented creatives, cast and crew. I am just so very grateful for this phenomenal opportunity and the incredible support that you’ve all given me, all your kind words and cheer – it truly means a great deal to have been part of something so many of us have loved. My heart aches with how much I will miss Ser Brienne of Tarth. But what she has inspired I will take with me. Thank you. Thank you. Thank you. ⚔️?

“Playing Brienne of Tarth has redefined the way I look at the world, women and particularly myself,” wrote Christie. “My heart aches with how much I will miss Ser Brienne of Tarth.”

Some characters from the past also showed up for the final season. Robin Arryn (played by Lino Facioli) returned, for example, and posted pics:

9 years ago I had the honour of being invited to work in this incredible series. It’s been a wonderful adventure and I’m so, so thankful for having been able to be a part of it! #Got #RobinArryn

Fans couldn’t get enough of his transformation, naturally.

And, finally, no round-up of behind-the-scenes photos would be complete without this pic from Sophie Turner (Sansa Stark):

Although there’s been a lot of talk about Turner’s vaping, honestly, I’m here for Maisie Williams’ bomb sunglasses.

Well, I’m off to cry now. At least until the prequels come out.