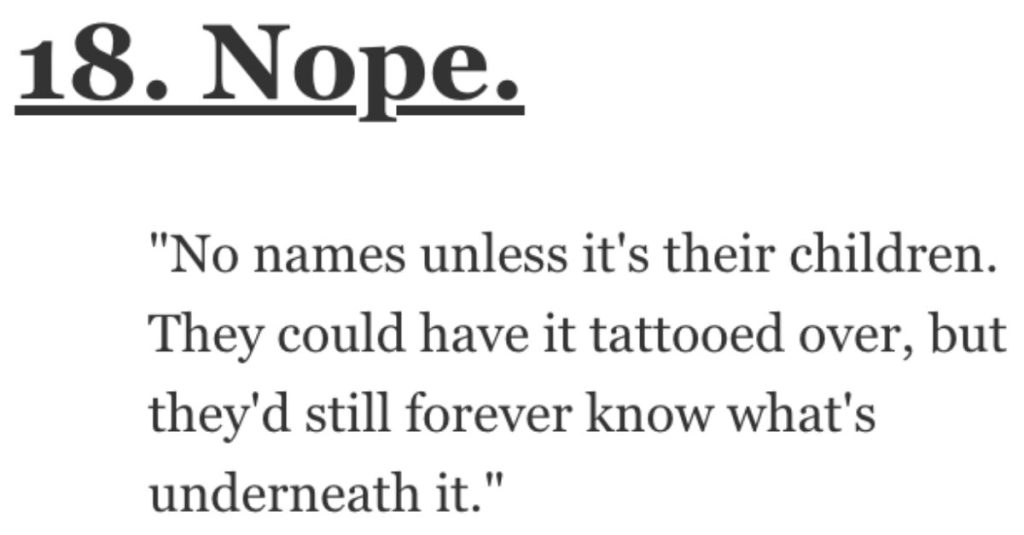 Being a tattoo artist must be a really interesting profession.

You meet all kinds of different people and you get to know a lot about them while you work on them for a few hours (or more).

And some artists out there refuse to tattoo certain things on people.

AskReddit users who work as tattoo artists talked about when they had to refuse to put ink on customers. Let’s see what happened.

A guy brought the picture in just cause he saw it and thought it was cool.

I would like to think I may have saved his life or just a serious beating.

I am pretty sure if they knew I did it they might not have been happy.”

“I asked this question to the artist who did my tattoo.

He said they refused to do stars in his shop.

Apparently stars are for people who want a tattoo but don’t know what they want.”

“I know a tattoo artist who has a very firm rule about not tattooing hands or neck unless there’s no more room left on the person.

Always thought that was fair.”

“My tattoo artist refused to give a guy thigh length tattoos of squirrels going after the dude’s nuts.”

Even husbands and wives names are kind of a bad idea as its not unusual for the relationship to go south after getting the tattoo.”

“I constantly refuse to do portraits.

I don’t enjoy doing them and if my heart isn’t into it then the customer isn’t getting 100%.

I believe they should to go to someone who loves doing them to get the job they deserve.

And for the record, it irks me that some artists do take on the job of portraits and aren’t good at them.

By all means practice on mates who understand but charging top dollar for average jobs just isn’t on.”

“A friend of mine is a tattoo artist.

He won’t do any of the really well known gang symbols.

His reasoning is that the gangs have their own people to do it and someone coming into his shop is probably a poser who’s going to get killed for it.”

Hard no on that one.”

“The one that sticks out in mind was this 18 year old white girl went into his shop and asked him to tattoo her knuckles, neck, and do a full sleeve.

The reason he denied it upfront is because he knew she was basically attempting to ruin her social life and be denied jobs forever just because of it.”

I was requested to do a purple star on the a**hole.

He requested we be alone and he’d pay well but I was getting the feeling he wouldn’t pay enough given the uhh… attention he was wanting.

I also refuse hate symbols because I don’t want racists coming to me and my hands get shaky when I’m mad.”

“Anyone with no ink who wants an everlasting job stopper, hands or neck without a substantial amount of existing ink.

Hard no otherwise is teardrops on your face even if you have f**king killed someone.

Or partners’ names, which are a curse.”

“A dude was in the shop with his girlfriend telling me he wanted his name on her neck.

She seemed very quiet and didn’t have a lot to say about it.

It seemed a little weird and when the dude stepped outside for a second I asked her if she really wanted it and she shook her head.

“I was asked to put a full-fledged erect p**is on someone’s back, right above his a** crack. Veins and all.

I would have considered it but there was some heavy breathing involved and…yeah, no, I do not want to spend hours and hours lovingly fulfilling your d**k-ink fetish, thanks very much.”

“An 18 year old girl wanted her considerably older boyfriend’s name just above her private area for her first tattoo.

A hard no, and I had to explain why it wasn’t a good decision.”

“I was asked to put a full-fledged erect p**is on someone’s back, right above his a** crack. Veins and all.

I would have considered it but there was some heavy breathing involved and…yeah, no, I do not want to spend hours and hours lovingly fulfilling your d**k-ink fetish, thanks very much.”

“I had a conversation with my tattoo artist about this.

He said he wouldn’t do any “instant tough guy” tattoos, mainly face, neck or hand tattoos, unless the person already had a good deal of coverage on other parts of their body.”

“Someone wanted to tattoo shark/dragon eyes, like those on old bomber planes.

“No names unless it’s their children.

They could have it tattooed over, but they’d still forever know what’s underneath it.”

“You get 18 year old boys who wanna look heavily tattooed by just getting hands and neck and I always refuse to do them.

sometimes they come back later on with the tattoos they’ve asked for done by someone who clearly can’t tattoo.”

“Hate symbols are always a hard no.”

“I was a tattoo artist and I was asked to draw a dog with a human head, shark fins, cat legs, and a lizard tail.

At first I went along with it but i asked to make sure that was what he wanted. He then said “give it a d***” i just asked him to leave.

This was a few years ago and still remember it very clearly.”

“A sw**tika making love to a Confederate flag.”

“I was asked by a maniac to tattoo 4 years worth of his dead girlfriend’s essays all over him until there isn’t a spot with his skin color left.”

“Anybody clearly fu**ed up.

Anybody who couldn’t pay.”

We want to hear from more tattoo artists out there!

In the comments, tell us some more stories about weird interactions with customers.