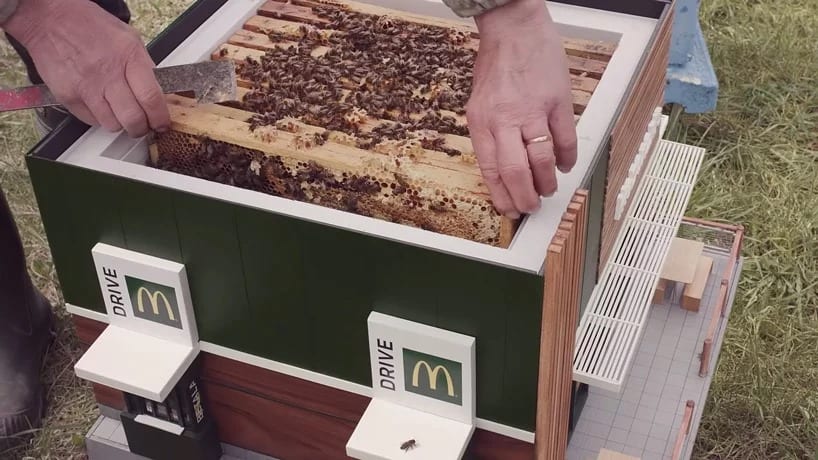 The World’s Smallest McDonald’s Is Now Open, but It’s Only for Bees

Is this thing amazing, or what? The world’s smallest McDonald’s restaurant is now open in Sweden, but it’s not for humans…it’s for bees.

Yes, you read that right. Known as The McHive, it is for bees only.

Climate change is bad for all of us, and bees are no exception. Several McDonald’s locations in Sweden have decided to do something about about it. They’ve put beehives on their roofs and planted wildflowers around their restaurants to help feed and home bees, and to call attention to their dwindling numbers, largely due to global warming and harmful pesticides.

Some #Mcdonalds in Sweden are doing their part to help our vitally important Bees! https://t.co/wLAqccaVSy

McDonald’s partnered with a creative agency called NORD DDB and came up with the interesting concept hive. The little replica restaurant is a fully-functional beehive for thousands of bees. And the detail on this thing is incredible.

It has a patio, outdoor seating, and even has advertisements on the windows.

This is the smallest McDonalds' in the world!And it's for bees!Opened in Sweden last 20th May in honor of World Bee…

Christoffer Rönnblad, marketing director of McDonald’s Sweden, said, “We have a lot of really devoted franchisees who contribute to our sustainability work, and it feels good that we can use our size to amplify such a great idea as beehives on the rooftops.”

The McHive sold at an auction for $10,000 and all proceeds went to the Ronald McDonald House. Here’s a video about The McHive, so you can see it closer up.

I love this! Hopefully American McDonald’s jump on this great idea. With more than 37,000 locations around the world, getting these beehives into even a fraction of them is a great idea and a big potential step in the right direction.