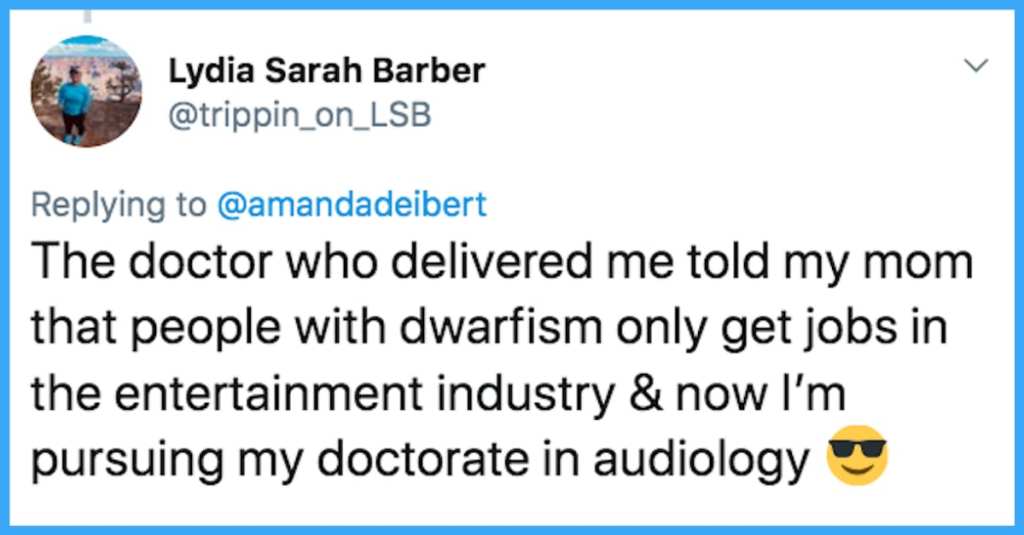 Tell me about a time someone told you that you could not do something and you went ahead and succeeded out of spite.

And Twitter delivered with some absolutely stories! Enjoy these 12 times when people used spite as their inspiration to succeed!

I was told in 6th grade that I couldn’t play on the boys softball team (there was no girls softball team). I made it onto the team as the first girl ever to play softball for my school. We ended up winning the city finals. Now it’s a co-ed team. #GirlPower

I had teachers make me take tests again in front of them because there was no way a black kid scored that high… I have a Masters. I was told I would never succeed in comedy bc I was too fat/not black enough… I have an Emmy. Someone please tell me I can't be a millionaire.

My head of department told me that over his dead body would he ever appoint a woman to the faculty. He’s dead, I’m a Distinguished Professor

I was a young lesbian growing up in Foster Care; I heard “you can’t” and “you’ll never” a lot. Today I am a double PhD and happily married to my wife of 10 years (married only 7, Prop 8 tried to tell me no, too).

In 1988 I was told my broadcast aspirations should focus on weather or entertainment — sportscasting on TV was male domain. In 2000 I had the honour of being the first woman, in canadian broadcast history, to host her “own sports show” in prime time.

7. Self hate turns into self motivate!

I am meaner to myself than anyone I know, so I constantly do things after telling myself I will never be able to do them. Latest example is I made an awesome sweater after years of only knitting scarves and hats because sweaters were too hard for me. pic.twitter.com/257NypeucF

I was continuously told growing up by certain very close to me that I’d do nothing better with my life than work at McDonald’s.
I just finished placing hardware in someone’s spine that would help them walk at their grandchild’s wedding this summer.

9. A rose by any other name would smell as sweet…

This is a very small thing but I went to a garden shop to buy a rose bush and the store manager said "I'm not selling you roses. You don't need a hobby."

I started spite gardening and now I have a thriving garden and a huge rose bush in my backyard.

Got married my first year of law school. Overheard prof telling someone I’d be knocked up and dropped out w/in year. Had baby, graduated first in my class. Prof. since disbarred. Not so much “spite” as karma. But, yeah, go ahead and tell me no …

Nothing I wrote seemed to please my Writing the Essay professor. Now I have a published book of essays. He does not.

12. Don’t ever limit yourself!

Whether it’s spite that motivates you or something else, always go out there and try to turn your dreams into reality.

Because what’s life without dreams?