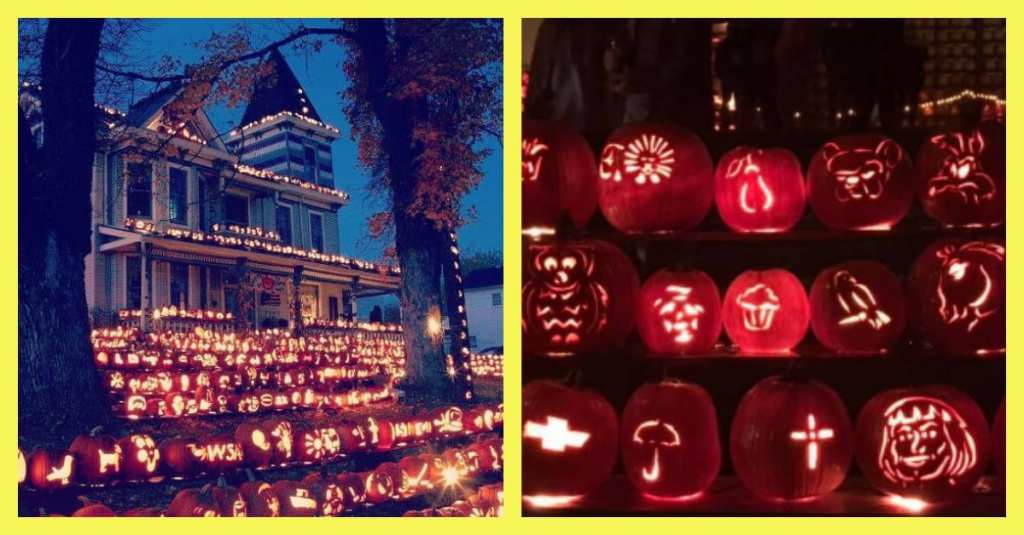 This Halloween House Is Decorated with 3,000 Pumpkins and Is the Highlight of a Small Town

Halloween is finally getting its day in the sun…or maybe its night in the moonlight. Halloween dates back centuries and while most neighborhoods do the traditional trick or treat, the Griffith family in Kenova, West Virginia makes Halloween an event.

It all started when Ric Griffith set out four little pumpkins in front of the local drugstore. Later he and his family moved to a larger home and the pumpkin craze grew from there. Today, there are 3,000 pumpkins lining his property, porch, and roof! The number 3,000 isn’t random, however. Griffith was the former mayor of Kenova and each pumpkin represents the residents of his small town.

But how does he do it?

I’m sure his hand is cramped from designing and cutting out all those pumpkins! On the contrary, his home is a major feature for the Kevova’s C-K AutumnFest. Griffith’s home is featured as “the Ultimate Pumpkin Experience.”

“Locals take great pride in it, and then there are people from around the country who plan fall trips and include it on the route just so they can see it,” Tyson Compton, president of the Cabell-Huntington Convention and Visitors Bureau, told Parade. “It’s really something.”

All residents pitch in to help carve jack o’ lanterns, silly faces, cartoons, and messages. Griffith has a whole team helping to set up this intense display that Jack Skellington would be proud of.

Check out these pictures!

“Each year Ceredo and Kenova welcome nearly 30,000 visitors to the Pumpkin House. Over the years we have watched children that have visited the Pumpkin House grow to have children of their own that they now bring to see the display. This sense of tradition and community inspired the creation of the C-K AutumnFest, which is on the fast track to becoming one of the favorite West Virginia fall festivals.”

The festival happens the last weekend in October! Be sure to see it if you get the chance.