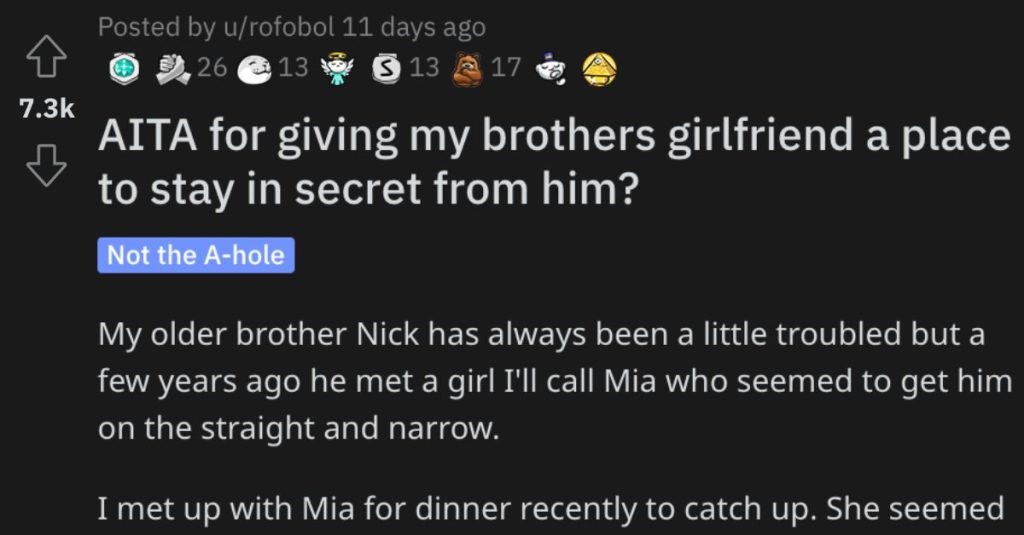 This Person Gave Their Brother’s Girlfriend a Place to Stay Behind His Back. Are They Wrong?

Sibling relationships can sure be strange.

And this story from Reddit’s “Am I The A**hole?” page is pretty indicative of that.

It involves going behind a brother’s back and being. sneaky…which can always lead to some hard feelings.

But there’s more to this story than meets the eye.

AITA for giving my brother’s girlfriend a place to stay in secret from him?

“My older brother Nick has always been a little troubled but a few years ago he met a girl I’ll call Mia who seemed to get him on the straight and narrow.

I met up with Mia for dinner recently to catch up. She seemed anxious and upset and after a while she opened up about how Nick was getting really jealous and controlling and was jeopardizing her ability to finish college.

Having issues with her living in an apartment where she could be having other men over. Having issues with her being in study groups and classes with mostly men in her engineering degree. He even contacted some of her professors behind her back because he did not want her on group projects with men.

My advice to her is that her education is the most important thing right now. That she should focus on her upcoming senior year even if that means making it a priority over her relationship.

She said she was worried she wouldn’t be able to do that without angering him, he’d shown up unexpected and angry a few times to her apartment and when she had to deal with him until he had calmed down she was missing deadlines.

She admitted she felt like she didn’t want to be with him anymore but she was scared of what would happen if she broke up with him. He’s paying for some of her school costs and she doesn’t have family support. Plus he wouldn’t take it well, she thought, and she wouldn’t feel comfortable staying in her apartment.

I told her that she could stay with me, for senior year. Pay me below market rent and use the savings to cover other expenses. The only thing I’d ask is that she doesn’t tell Nick where she is living or that she’s still going to the same college, or anything like that. Because I didn’t want to deal with the drama of having him show up at my house with a bone to pick.

She agreed and moved in as a roommate. She lost his number and locked down her social media, switched jobs and told her professors to not answer his emails, and all that. But then my mom came to visit unannounced and saw an Amazon package in the driveway addressed to Mia.

She found out I was roommates with her now and had helped her “disappear” on Nick. She was really upset with me because family comes first and Nick had been spiralling after his girlfriend ghosted him with no explanation. And that it was terrible of me to help her leave him without even a breakup or explaining.

I said that he was hurting her chances of finishing college and I felt like that was more important than a boyfriend. Hadn’t she always told me to focus on my school and career and not get sidetracked by boys? If she knew that was what was best for her own daughter couldn’t she want the same for someone else’s daughter?

She said I was twisting her words, there is a difference between focusing on school and ending a relationship that was headed towards engagement with only a message saying to leave her alone.

AITA for helping my brother’s girlfriend leave him quietly?”

Oh, boy…let’s see what Reddit users had to say about this.

This reader said that the truth is pretty simple.

This person’s brother is controlling and has some serious issues. 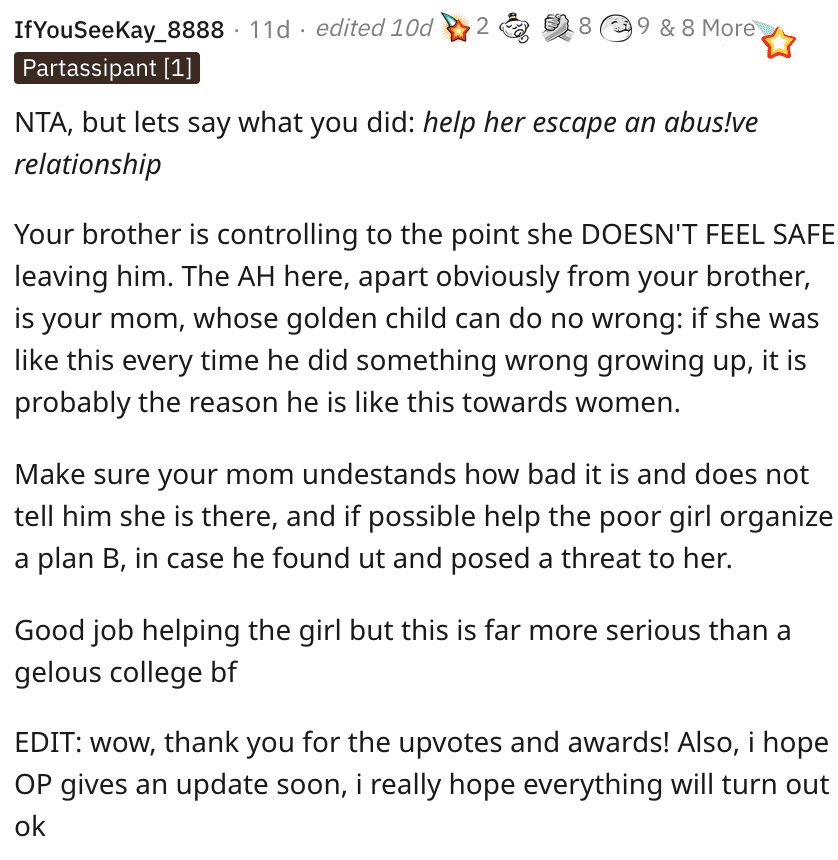 Another person said that the person who wrote the post needs to talk to their mother about what their brother is really like. 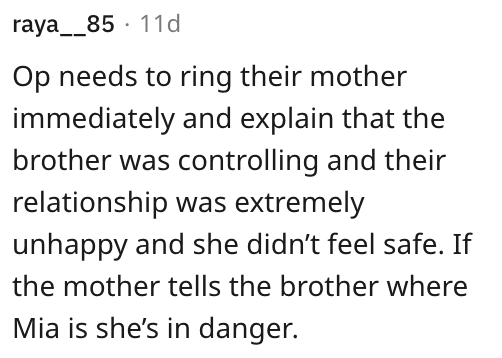 This Reddit user said that this is a dangerous situation and that the brother’s girlfriend could be in serious danger. 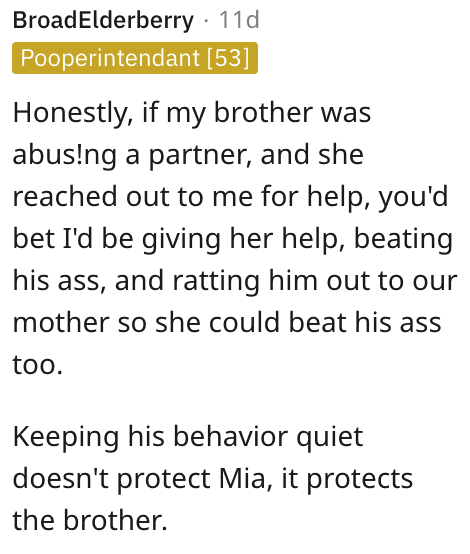 And lastly, a reader was nice enough to give a whole bunch of advice because they’d been through a similar situation in the past. 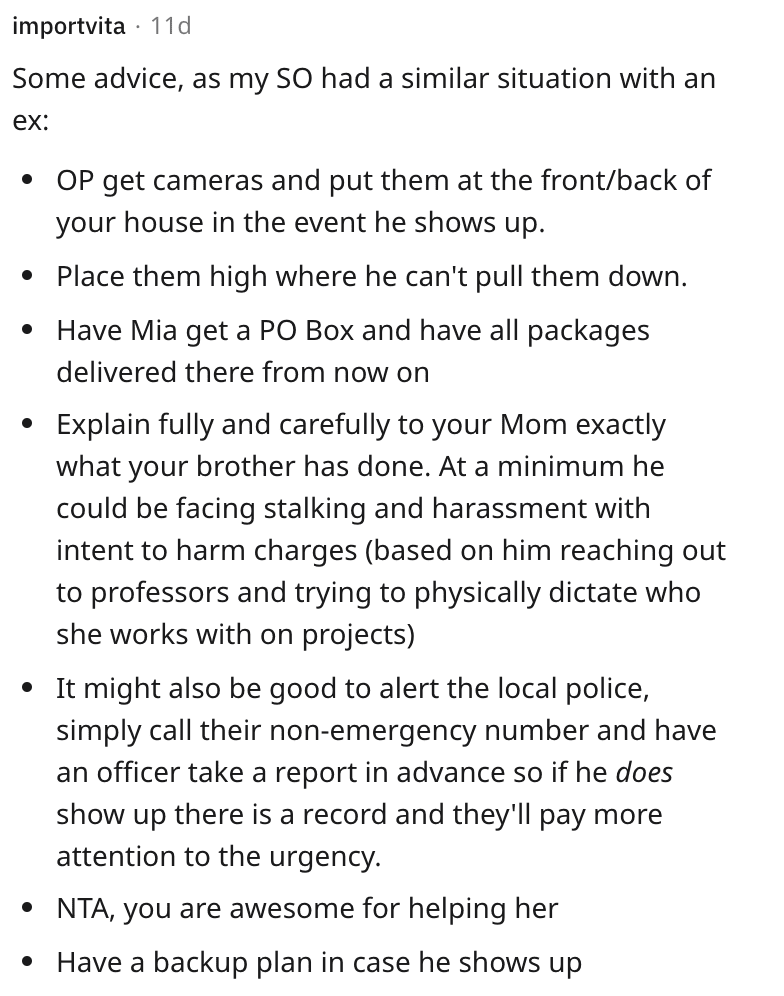 And remember: don’t hold back at all!