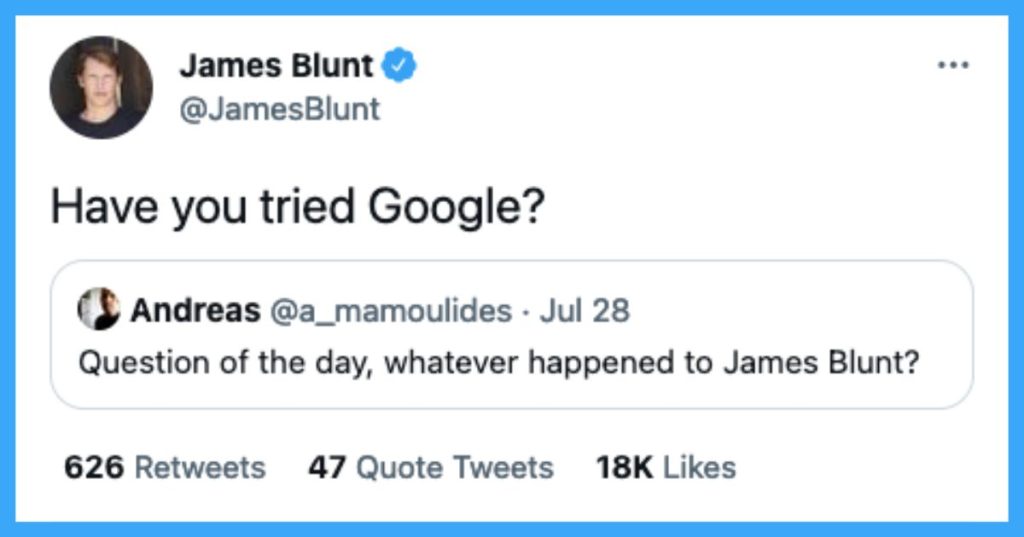 When I first joined Twitter, low these many years ago when it was less populated and less political…

Doesn’t matter who. (It was Nathan Fillion.)

Nowadays it seems rare to find someone who really dedicates themselves to a bit on Twitter.

There was comedienne Megan Amram’s bit about Trump for four years.

And Rex Chapman has a very strong Twitter game, as well.

Well, believe it or not, so does musician James Blunt, who is perhaps best known for the 2005 hit “You’re Beautiful,” and if his Twitter account can be believed, not much else.

Proof that one song is all you need.

It’s got to be irksome to have your entire career overshadowed by one hit song that got so big that now it’s trendy to hate it, but Blunt turns it into an art form.

And he’s been doing it for years.

It’s good to have a sense of humor.

Even if you don’t @ him, he might have something to say.

2006, actually. RT @K_Dick33: Why does James Blunt have a million followers? He stopped being relevant in 2009

And you just never know when he’ll pop up in your mentions.

I’m not playing. This is a serious workout. RT @chappell_lewis: James Blunt is playing in the gym. This is unacceptable.

He doesn’t mind if you don’t like “You’re Beautiful.”

Yet so many people bought it, bought it. RT @yanto1973: That James Blunt song is utterly horrific, horrific.

In fact, he’s crying all the way to the bank.

But if you’re going to have a go at him, at least get the song right.

Mainly coz it’s by Daniel Powter. RT @lenacoleman: Pretty sure playing James Blunt's "Bad Day" on loop is not an option.

And watch your grammar, because like me, it seems he can’t stand a misused “your.”

Sometimes people get lost in the echo chamber and forget that their tweets are public and anyone could see them.

So just be prepared, if you’re going to talk about James Blunt… he might have some thoughts.

Have you tried Google? https://t.co/gjibWLAHO8

And lest you think his career was nothing but that one song, he has a new album coming out–and jokes to go with it.

Honestly, I followed him just because writing this article gave me a real appreciation for his master class snark.

I kind of love it. And shut up, the song is catchy.

What do you think? Best way to use Twitter?