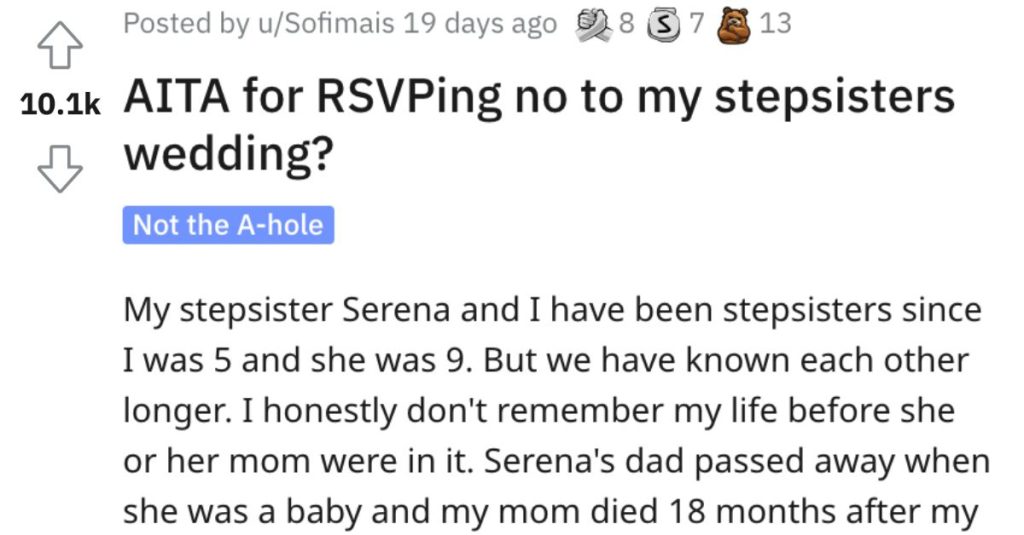 People sure can get worked up when folks don’t respond to events, huh?

And I get it, you gotta be organized for that kind of stuff.

But what happens when you RSVP a big, fat NO to a wedding to someone who you’re related to?

AITA for RSVPing no to my stepsister’s wedding?

“My stepsister Serena and I have been stepsisters since I was 5 and she was 9. But we have known each other longer.

I honestly don’t remember my life before she or her mom were in it. Serena’s dad passed away when she was a baby and my mom d**d 18 months after my dad married my stepmom. So we essentially lived together for a large chunk of our childhoods.

But she never did consider me family or her sister. She’s older so I get that the experience was different for her and she remembers a life before me. I never took it too personally though I did try to make us closer over the years and she was never interested. People used to tell me once we were adults it would be easier because we’d be at the same stage in life.

Serena’s getting married in a little over 2 months and I decided to RSVP no to the invite. I was always a little awkward about going but I would have. Then last month my parents invited Serena’s bridesmaids over to thank them for being part of the wedding.

There, I learned that one of her friends younger sisters was also going to be a bridesmaid. This is a friend she has known since senior year of high school. The younger sister is apparently someone she considers a sister. The youngest sister told me Serena always said she was the sister she never had and stuff.

That she had specially asked her to be in the wedding because she considered her as close to a baby sibling as she ever got and wanted her there. I said nothing but it just made me realize that she actively chose not to try with me but could choose to try with one of her friends siblings she met years after meeting me.

Through talking with Serena’s “little sister” I realized she had made such a big effort to hang out with and spend time with her, and went to her milestones like graduation or even big birthdays (sweet 16, 21st). She never showed up to that stuff for me or when she did (my 21st she did show for) she made no effort to hang out with me.

She went because her mom had paid for an open bar and some of her family was going to be there. I don’t remember her even speaking to me that night.

So I RSVP’d no and her future husband sent me an email (with my name wrong) that Serena didn’t want her mom to know. But then he went and mentioned it to my dad and now it has blown up.

My dad asked why I wouldn’t attend and her mom is saying after all she has done for me, I should show up and be part of the family event. To me I might be their family but Serena has made it very clear I am not hers. I don’t think I did anything wrong but I feel guilty too because this has made ripples in my family.

This person said that this woman didn’t have to go because her stepsister makes no effort in their relationship. 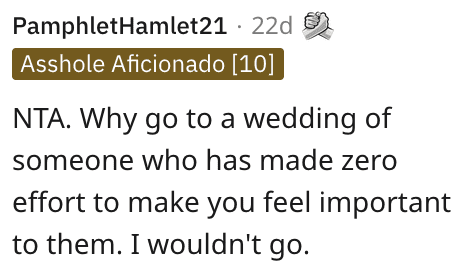 Another reader said that she should skip the wedding and not humiliate herself. 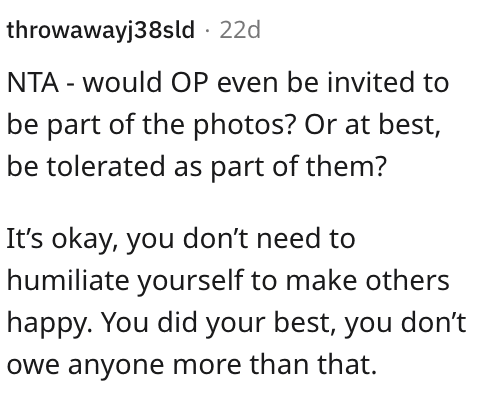 This person said that she is not the a**hole but her stepsister and parents sure are. 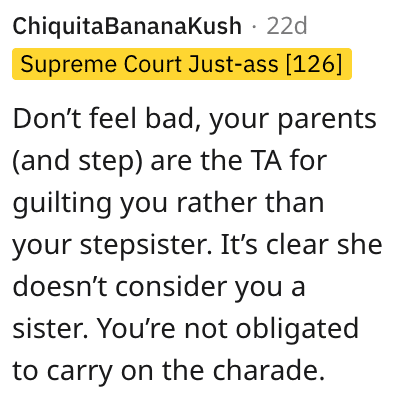 And lastly, this Reddit user said she should be completely honest with her parents about why she isn’t going to the wedding. 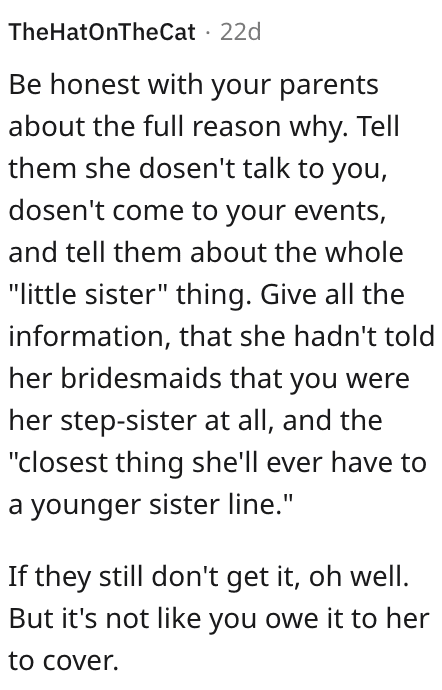 And now it’s your turn.