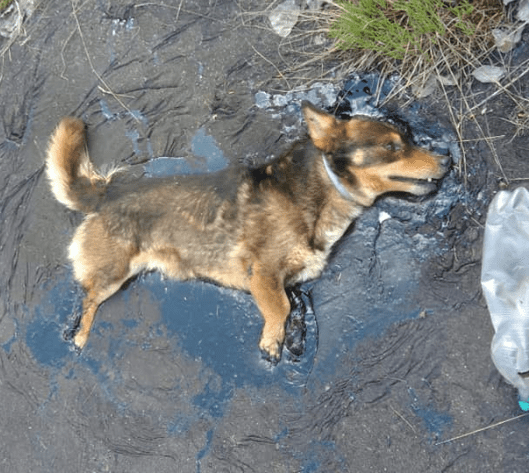 This Poor Pupper Was Trapped in Tar, But He Never Gave Up

It started out as a typical day for workers near Suwalki, Poland, according to The Dodo. They paused their work, though, when they heard faint barks from a wooded area nearby. The barks were urgent and nonstop, and they worried the workers enough that they went to find the source.

What they found was heartbreaking: a small pup stuck in a tarpit. They suspect he was seeking warmth, and didn’t realize that the sticky tar would trap him. The workers called the Niczyje Animal Foundation, who sent a rescuer. She worked carefully along with a crew from the local fire department.

They cut away portions of fur that were stuck in the tar and used spatulas to loosen up the rest. Finally, he was free.

The rescuers rushed the pup to a local vet clinic, where he was treated for exhaustion and had more of the tar scrubbed off his little body. After a close examination, they found the dog had no serious damage; just a few superficial injuries to his face.

Today, the pup (who has been named Farcik) is being cared for by his rescuers, and, once he’s ready, he’ll be adopted out to a forever home.

What a sweet, tough little guy!