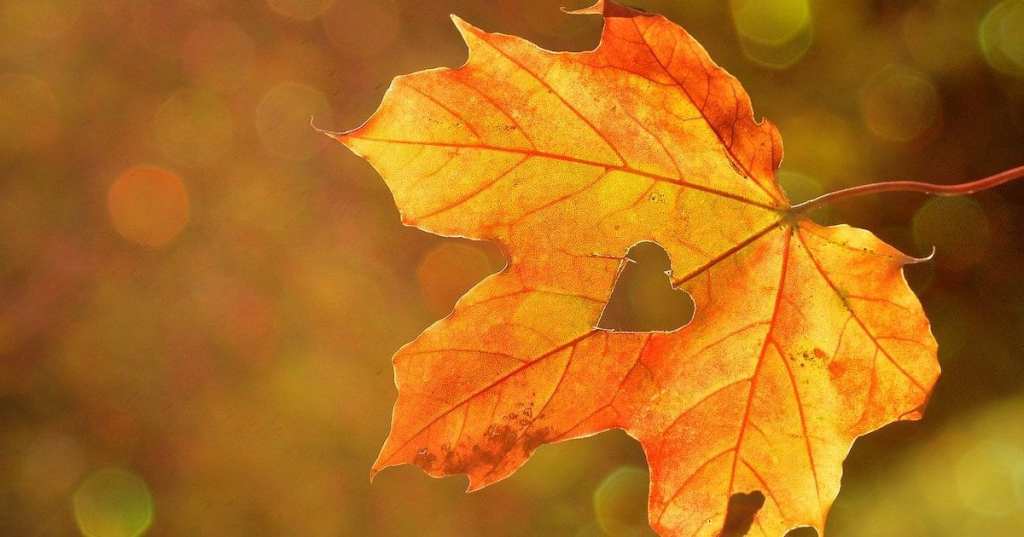 This Story About a Humble Farmer Made us Shed a Tear

You can find virtually anything on the Internet, most of which won’t stick with you past an initial viewing. But every so often, you’ll find something that touches your heart and stays with you for a long time.

This story of a humble farmer’s relationship to a god of small moments began its life on Tumblr and has been making the rounds ever since. It’s a story about kindness, beauty, friendship, selflessness, and unconditional love, and it’s causing readers to stop, reflect, and shed a few tears.

Meet Arepo, a farmer who builds a temple in his field to find a god to simply look over him. One eventually answers the call, but as a god of non-important but beautiful moments, it’s reluctant to take on the job. 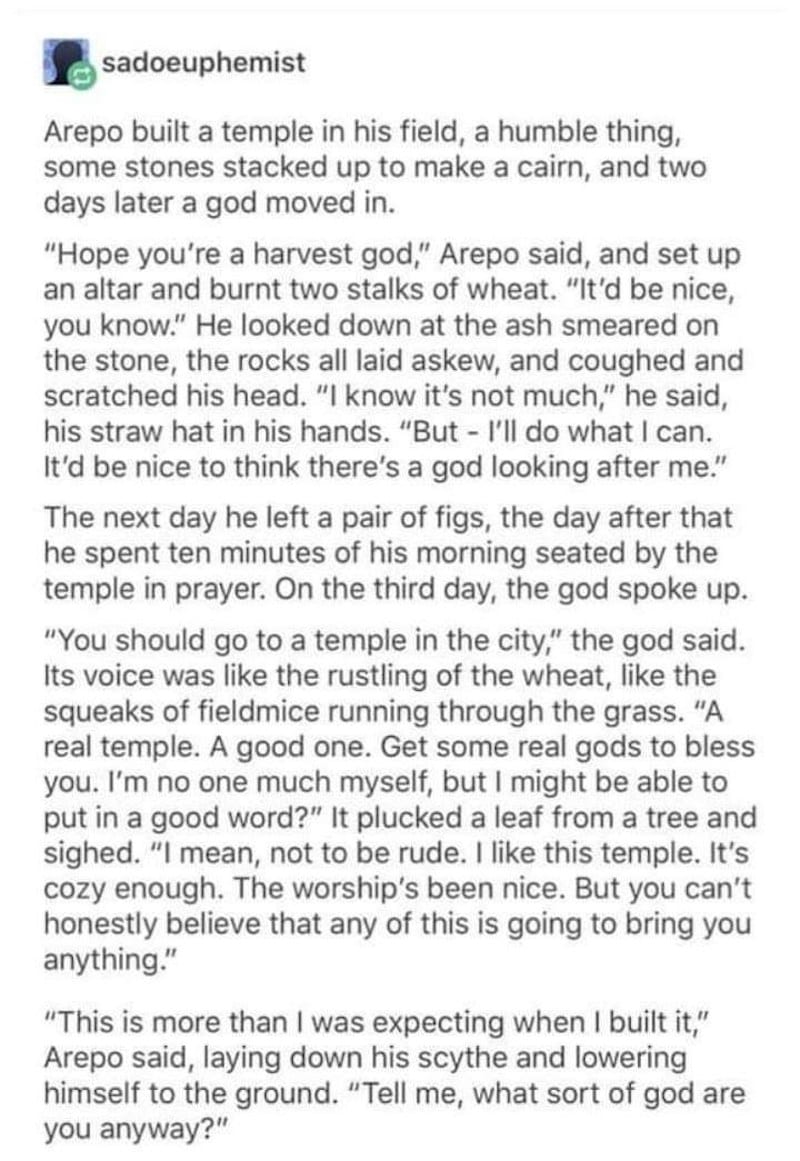 Arepo didn’t think he’d get a response from a god at all, and was happy with the one he found.

He continued to worship this deity, adding to the temple over the years.

The god, however, couldn’t save Arepo and the temple from a storm that was approaching and told hime he was wasting his time. 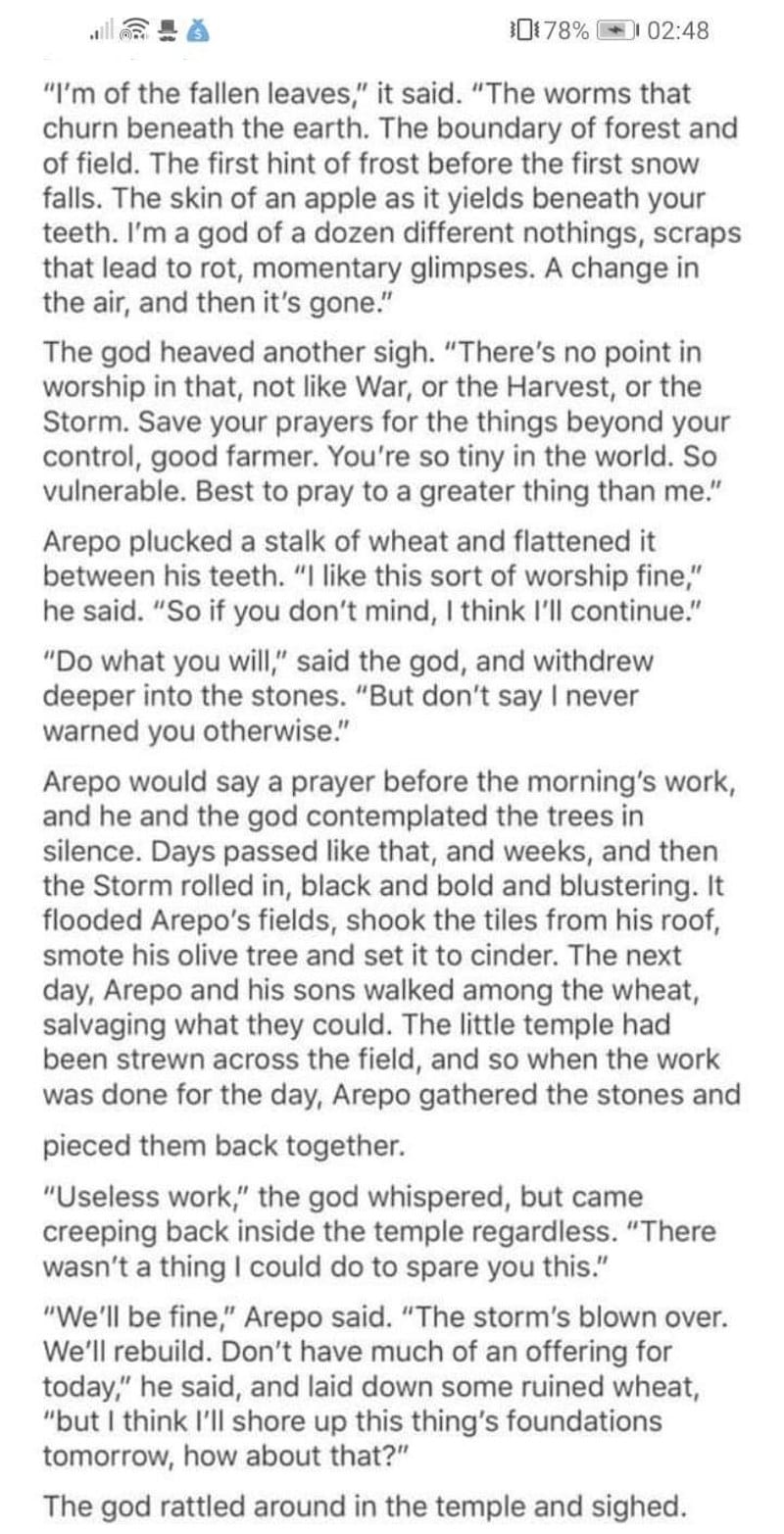 After rebuilding the temple, the god warned Arepo that he couldn’t save him from hunger, but it didn’t matter—the farmer was unwavering in his devotion.

The god could not save Arepo from the violence that took his life, yet he remained true to the god, even as he died. 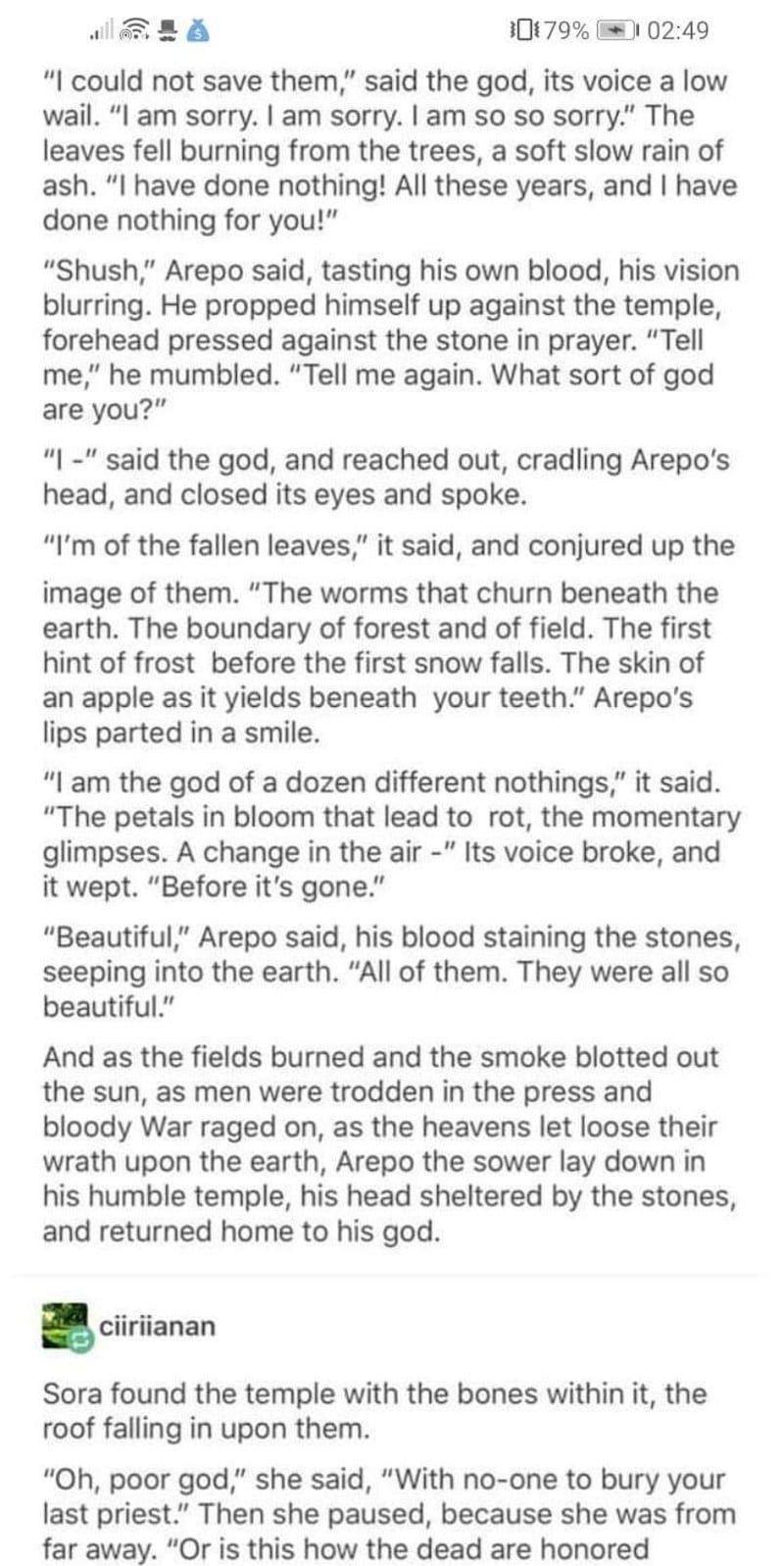 A woman named Sora happened upon Arepo’s body and buried him in the temple, per the god’s request. 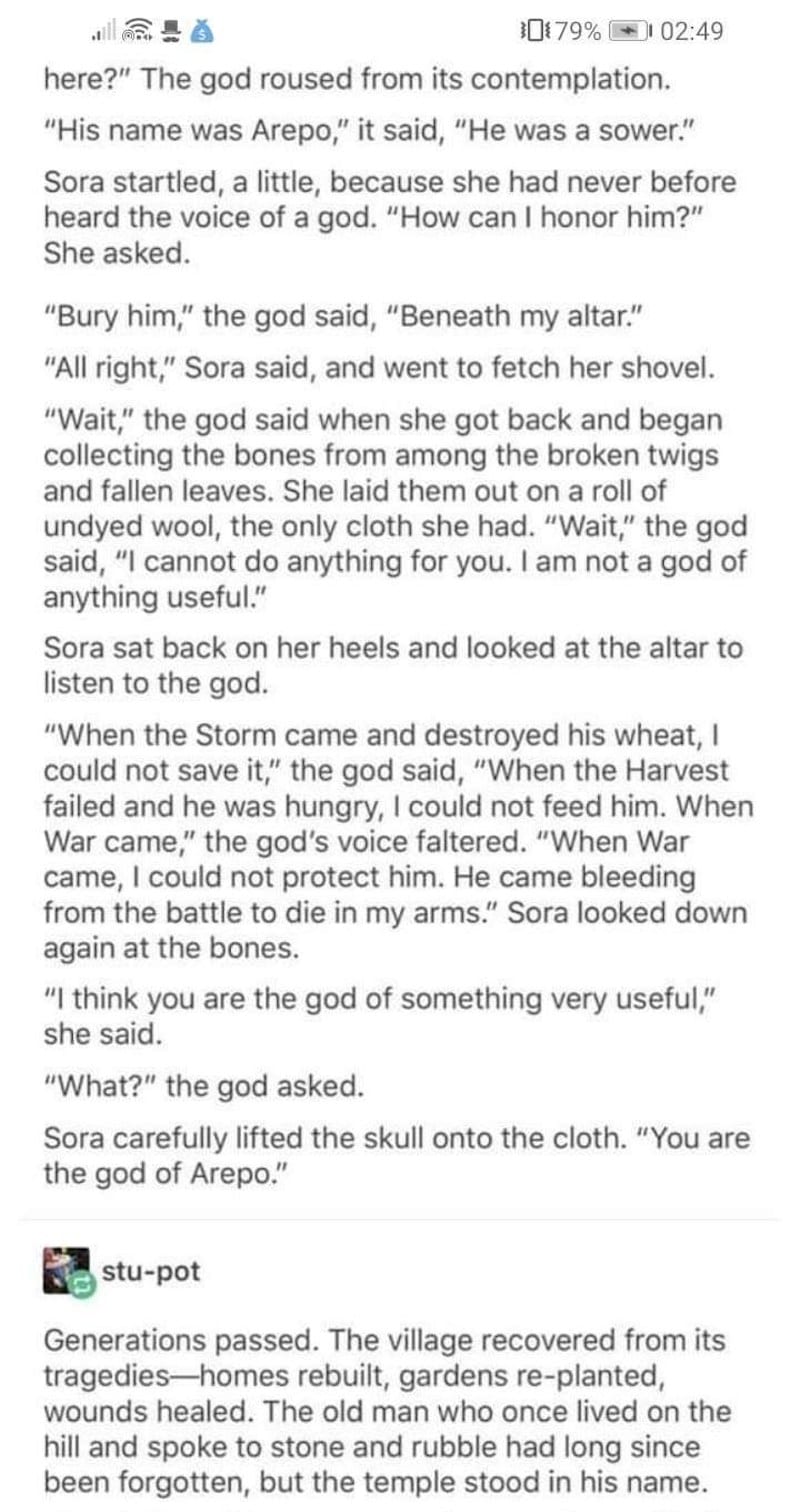 Generations passed. The temple stood, all but forgotten and the god watched the world go by. He spent days pondering Arepo’s devotion. 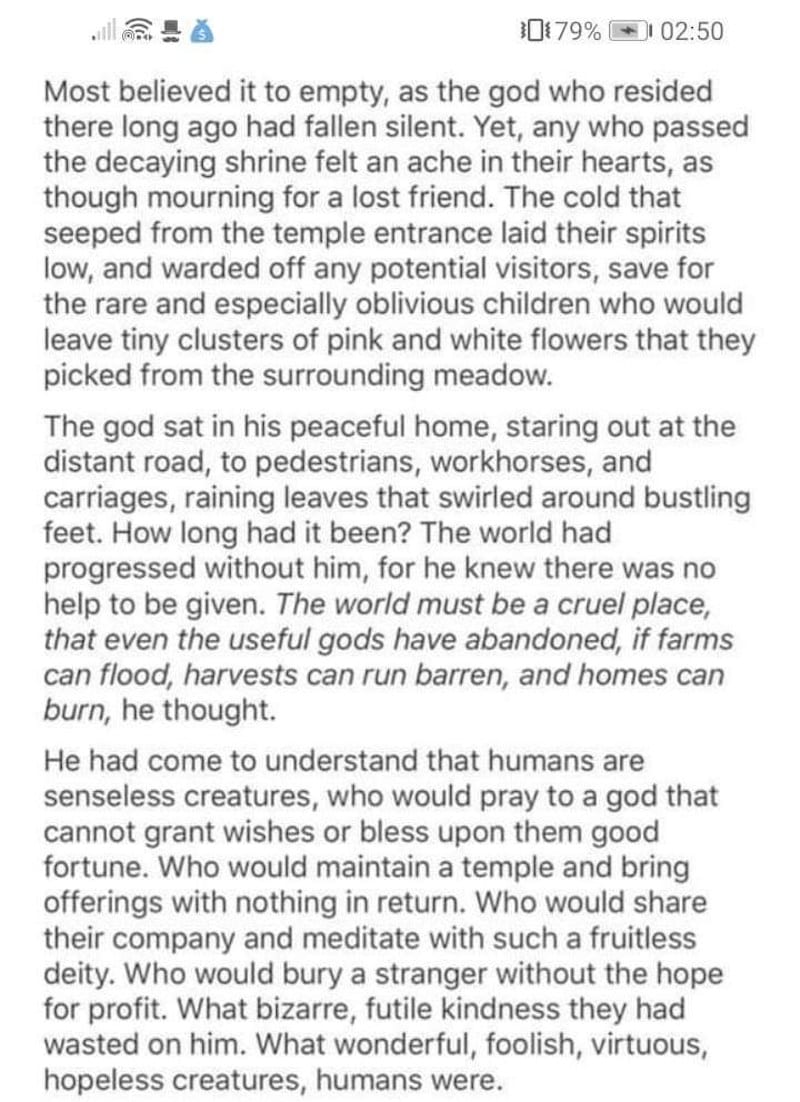 He was moved by it and created even more beauty to honor the farmer.

When, all of a sudden, he had a visitor who would teach him his worth.

Did this story cause you to shed some tears? Have any lingering thoughts about Arepo?