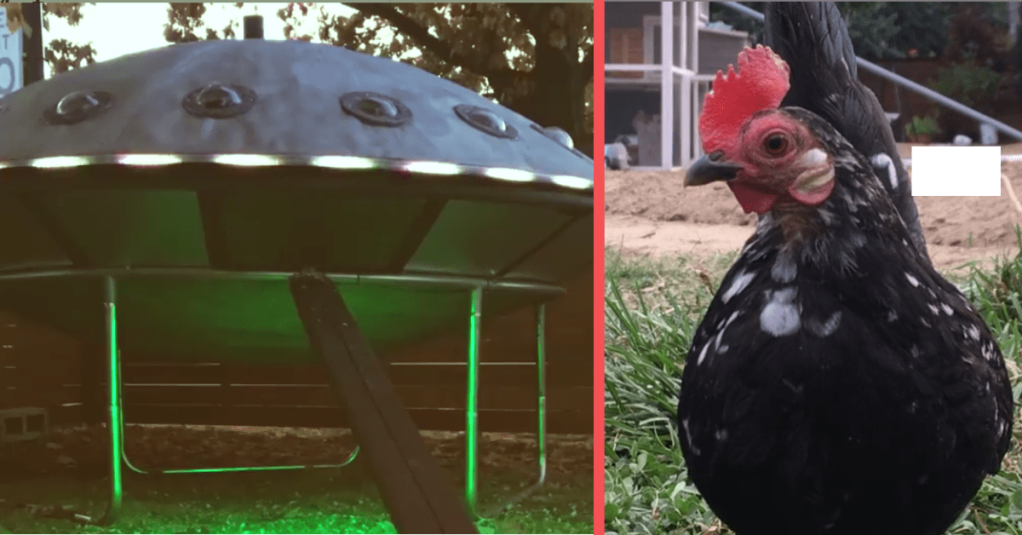 I would call myself medium-crafty. I knit and crochet. Last year I sewed a LOT of face masks.

But I don’t take on large, ambitious projects that can’t be easily unraveled.

So I am super impressed by people who build actual things, and I loved the story of one couple who took nerdom and crafting to a whole new level.

Back in 2017, Ellen (née DeAngelis) and Brett Wilson of Boise, Idaho expanded their chicken flock.

And as any poultryman knows, chickens need a coop for roosting and to keep them safe from predators.

Being self-described “UFO nerds,” Brett and Ellen came up with a pretty cool plan.

They documented the whole process over on Backyard Chickens so that like-minded and ambitious chicken keepers could do the same.

We quickly determined that the satellite dish would be a stellar foundation. We located two 10 foot dishes on our local Craigslist page and jumped straight into this project.

I didn’t even know you could buy giant satellite dishes on Craigslist, but I guess that’s why I don’t have an awesome chicken coop.

My favorite part of their plan were the mods that they did to make the saucer extra homey and spaceship-like:

We cut window holes for windows and screwed in 6″ acrylic surveillance camera covers we found on ebay. They work perfectly!

They added a laminated wood floor, which can be easily removed for extra cleaning.

After that, the couple cut-to-size 1″ styrofoam insulation, because it’s Idaho and chickens don’t exactly live in igloos.

Next step was covering the insulation with a waterproof barrier. We chose a roofing material similar to tar paper called roofing felt at the local box store.

We cut pie shaped pieces and covered the craft…. hitting the seams with a hardy roofing tape. We then covered the craft with an Aluminum paint to provide waterproofing and a classic UFO color.

This paint is designed for roofing and would also help keep the coop cool in the Summer by reflecting light away.

We had to air the coop out for several days to eliminate any harmful fumes that may be lingering.

I’m just saying, these are some pretty pampered chickens.

After the satellite dishes, the next most ingenious step was placing the whole thing on top of an 8′ trampoline to protect the flock from coyotes and other predators.

Lights were the final touch to truly make it look like a spaceship! (and definitely the best part)

We used 2″ clear tubing to house the LED lights and put the power source on the back hatch door.

The lights are individually addressable LEDs with a 5v 4a power supply controlled by an Arduino mega.

When winter arrived, they added some additional heat that could be monitored remotely using RaspberryPi.

What an amazing home for their chickens.

For Halloween one year, they put out inflatable aliens and more lights, and they were the hit of Boise.

Their next big project was an indoor/outdoor playground for their house cats, which looks like it was also a great success.

Clearly, I need to up my craft game because this is next level creativity!

What do you think? Do they win Pet Owners of the Year?

Be sure to hit us up in the comments!