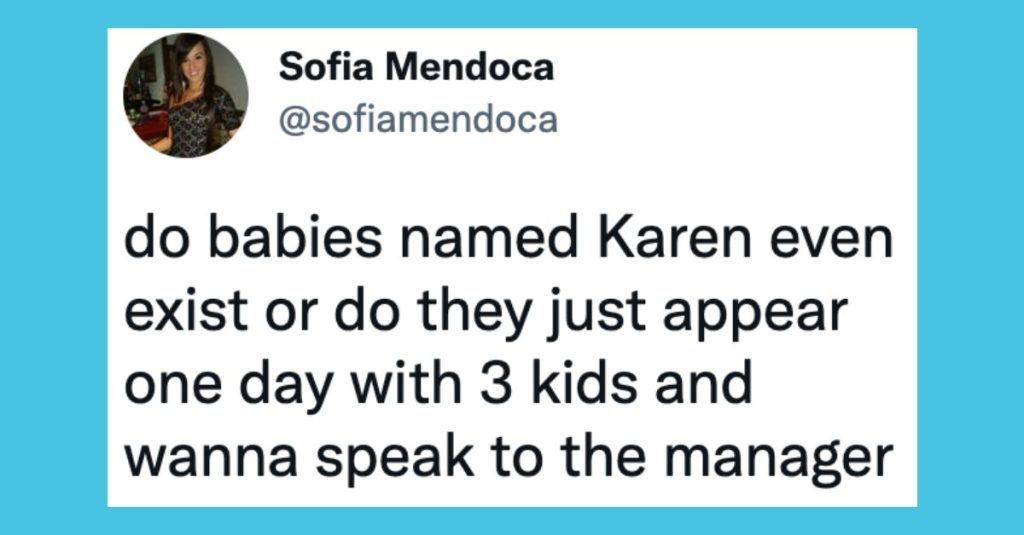 The Karens of the world really can’t catch a break lately, huh?

They’ve become the poster child for the lady who “wants to speak to the manager,” and now THIS.

But maybe they actually deserve all this criticism? All I’m saying is that this didn’t appear out of nowhere, okay?

Let’s get on with it…pssshhhhtttt…Karens…

Me and a coworker named Karen have this really cute thing where she tries to tell me what to do and I tell her that's not my fucking job.

I have a new girl named "Karen" in my accounting department. If I ever had an excuse to quit my job, she is going to be my reason why.

today is my last day at my job, and i'm fighting a woman named karen in a google doc, and let me just say, this is exactly what i wanted for myself

When the Karen haircut hits pic.twitter.com/B8bEN3ZjVg

6. That is a very good observation.

7. Thanks for that…for eternity.

Somewhere out there is a woman named Karen who made herself personalized items that say, "Keep calm and Karen on." I'm sure of it.

You could die, and some soccer mom named Karen will still ask you to RSVP for Kevin’s birthday party.

I just tried to kill a cockroach with Dove body spray, now it's name is Karen and she won't shut up about yoga

It's a little known fact that everyone in HR must be named Karen, Susan or Linda.

To all the Karens out there…we’re sorry if we offended you.

But it had to be done!

If you are a Karen who is pretty stable and normal, please sound off in the comments! We’d love to hear from you!