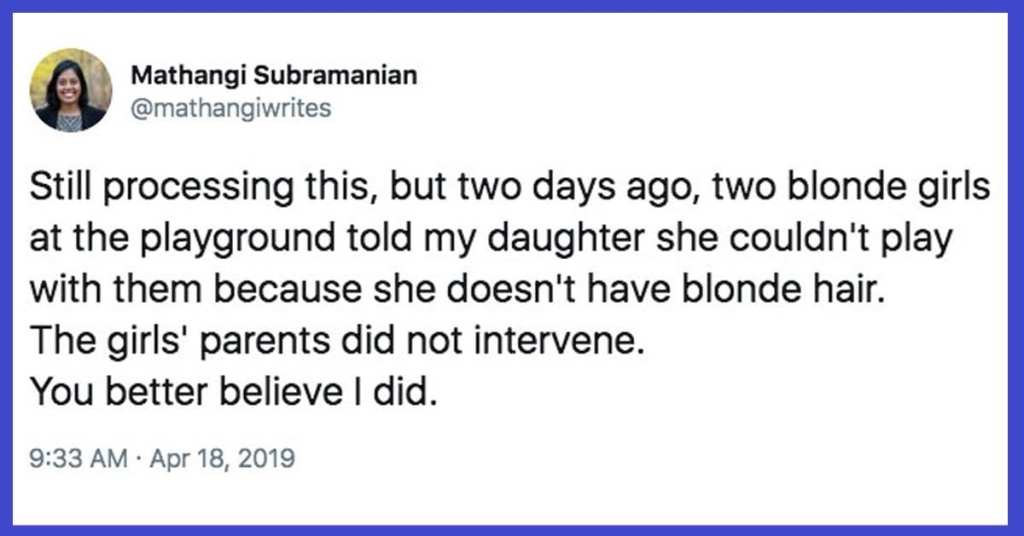 While most of us don’t enjoy discussing the uncomfortable aspects of like topics like race, the fact of the matter is that, as a parent, it’s your responsibility to educate your kids on these matters – before the world does it for you in a way you might not like.

Writer Mathangi Subramanian recently had an encounter with racism in a rather unlikely place – a children’s playground.

Still processing this, but two days ago, two blonde girls at the playground told my daughter she couldn’t play with them because she doesn’t have blonde hair.
The girls’ parents did not intervene.
You better believe I did.

Two blonde girls refused to let her daughter play with them because she wasn’t also blonde. When the parents, who were well within earshot, did nothing to intervene, Subramanian stepped up and told the girls that “the playground is for everyone, no matter who they are, and that they have to share the space.”

On the walk home, my three-year-old and I had a heart-to-heart about race and exclusion. It wasn’t our first time. The first time was when she was two, and she came home from preschool saying that her skin was black, and we talked about how dark skin is beautiful.

Here is the point: parents of color talk about race with our kids all the time. We have no choice. It’s there, everywhere, and we can’t avoid it.
I told the blonde kids at the playground that they can’t exclude people. I did it calmly and politely, while their parents watched.

This is a very important point. Race is inescapable for parents of color, whereas it’s something that most white people in America have the luxury of thinking about voluntarily because being white in America is essentially considered the “default.”

I can actually relate to both sides of this argument. Here in America, I’m a person of color and a minority, but back in India where I come from, my family belongs to the historically privileged class/religion.

It took coming to America for me to realize just how much privilege I had as a member of that class. I never had to think about my position in society. I never had to adjust my interactions based on who I was talking to, or even think about how other people might struggle if I didn’t.

But those parents should have intervened. They should’ve said something. My daughter was watching. Their daughters were watching.
White parents: TALK TO YOUR KIDS ABOUT RACE. I know it’s uncomfortable. But the rest of us do it all the time. We need you to do it too.

Addressing race is hard, but many scholars have noted that white people often make it even harder without even realizing it. I’ve seen firsthand how instantly defensive white people can become at the mere mention of racism, often taking it as a highly personal insult. The problem is that this defensiveness ends up overshadowing the original concern – suddenly, a potentially teachable moment turns into a fight that needs to be defused.

The biggest thing that needs to be understood by white people who want to be allies is that you can be a VERY nice person and still be racist. Sure, you might stop and pull over to help a black man having car trouble… but still feel upset if that black man comes to date your daughter. You could be best friends with a Hispanic co-worker… and still jokingly refer to Mexicans as “beaners” in private conversation (these are real examples I’ve personally observed, btw).

– Even if it’s uncomfortable, it’s our responsibility as parents to speak to our kids about race if we want a better world for our kids.

Some well-meaning white folks might suggest that we simply “stop seeing color,” but that isn’t a solution either because it comes from that same place of privilege mentioned earlier. White people don’t have to think in terms of color because (in America, at least), while people of color have absolutely no choice.

Even if it’s uncomfortable, it’s our responsibility as parents to speak to our kids about race if we want a better world for our kids. We can’t expect our kids to be inclusive if we don’t model that behavior for them. Expose your kids to different cultures, buy them dolls of various ethnicities, try to include diversity in the media they consume.

Thankfully, Subramanian’s story has a relatively happy ending, as strangers from all over the internet sent her messages of love and support.

My family & I are so overwhelmed and grateful for everyone’s support. Here’s kiddo today at the park with my husband, being her resilient self. This girl is not about to let racism steal her joy. I’m not either. pic.twitter.com/m1ncAv3ZZr

If you’d like to learn more about how to discuss topics of race, privilege, and tolerance with your kids, we’d recommend starting with these sources.

Or start with what’s in your heart – either way, start.