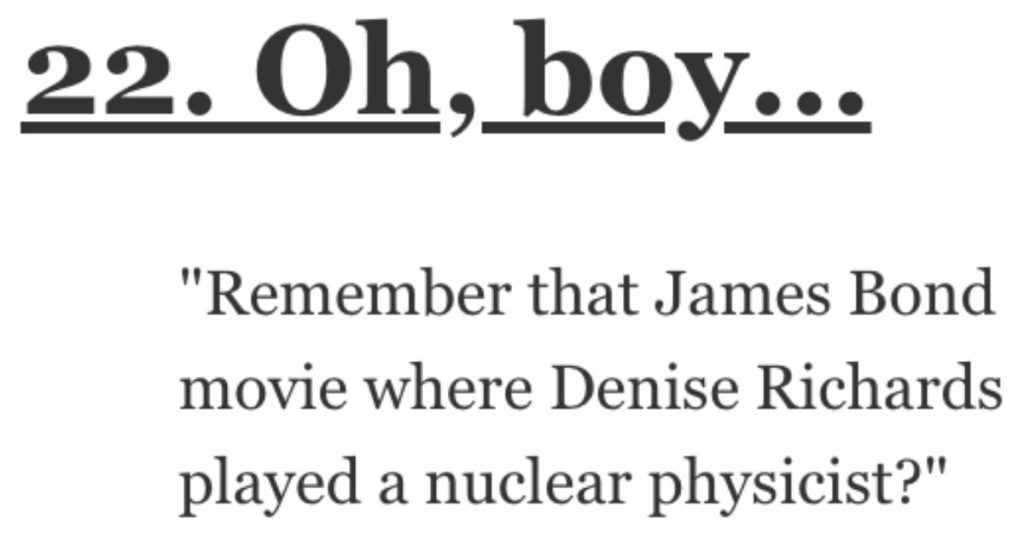 What Actors Were Totally Wrong for a Role They Played? Here’s What People Said.

Have you ever been watching a movie and thought to yourself, “why was this person cast for this role? What were they thinking?!?!”

It happens all the time!

But I guess there’s bound to be some misfires out there in the world of moviemaking, right?

What actor or actress did you think was totally wrong for a role?

“Joel McHale as Roy in the ill-fated US remake of The IT Crowd.

We want a scruffy and misanthropic IT nerd, so let’s get an actor known foorrr… charisma and confidence?

“Jon Voight as a snake hunter in Anaconda is fine.

But him as a snake hunter from Paraguay…with an accent?

“John Dorian as Dr. Acula. He is way to hammy, and not very threatening for a vampire who is behind loads of mysterious deaths in the hospital.

He clearly only got the part because he wrote the darn script for it. It was also a very racist filming process where multiple times Chris Turk was told to “act blacker”.

In good conscience I can’t support the film.”

“Kevin Hart as Roland in the upcoming Borderlands movie.

Everyone who knows anything about Borderlands will agree with me. Terry Crews should be playing Roland.

He’s big, has comedic chops, and can play the no-nonsense straight shooter BAD*SS when everything else is wild.”

“Maybe an unpopular opinion, but Sophie Turner as Jean Gray.

I like her as an actress, but I just couldn’t get into it.

I felt like she struggled with hiding her accent.”

“Colin Farrell as Alexander The Great.

As one of my old university professors once said, “I wouldn’t follow that guy to the end of my DRIVEWAY”.”

“Both Lily James and Armie Hammer in the Rebecca remake.

She’s way to confident to be the narrator and he’s way to smarmy to be deWinter.

And I thought that before all the creepy stuff about him came out – now it’s even worse to try to watch.”

“I will take a look in the future and say Mark Wahlberg as Sully in the Uncharted movie.”

I was so confused by Grease growing up.

Why are these people that look the same age as my mom at school?”

“Cameron Diaz was horrible in the 2014 Annie remake.

She hasn’t made a movie since.”

She can’t move her face anymore.

And I like Nicole Kidman, she’s done some great stuff lately but this doesn’t make sense.”

“Annabeth in the “Percy Jackson” movie.

The main physical feature was supposed to be the blond hair, and they somehow messed up on that.”

“Jafar in the new Aladdin.

He wasn’t believable or menacing and way too young.

Plus for much of his screen time he’s standing next to Navid Neghaban, who would have been a MUCH better choice.”

He conveys none of the intelligence, shrewdness or relentless determination of the book character. He comes across as a child dressed up in a suit and handed cue cards with smart-sounding lines to read unconvincingly.

He’s a child so I’m going to lay the blame for that one on the casting director.”

He would have been more believable as Kyle Raynor then Hal Jordan… he was regularly thrown around to play Wally West as the Flash.

They took a big(ish) popular actor and throw him at a role without any consideration that his personality matched the character.

Everything that makes Reynolds perfect as Deadpool makes him wrong as Hal Jordan.”

“Everyone in The Last Airbender movie.

specially considering the fact that they took the Waterbenders (canonically the nation with the darkest skin coloring) and made all of them white, then made the Firebenders dark-skinned.”

“Steven Seagal as a person who can kick *ss.”

“Jamie Dornan and Dakota Johnson in the 50 Shades trilogy

Aside from the movies being absolutely sh*tty, the two had no chemistry with each other and it was awkward as hell to watch.

More so when I found out that Jamie was married while filming those movies. The movies shouldn’t have even been made.”

19. Awesome except for him.

That move is pretty awesome except for him, it felt entirely miscast and I couldn’t believe this guy was the kind of character they were making him out to be.”

“The movie hasn’t even come out yet but Kevin Hart is playing Roland in the new Borderlands movie.

I can already tell you right now, it’s gonna be a terrible f*cking time.”

That is just wrong on so many levels, I don’t know where to start.”

“Is it now the time to talk about Topher Grace as Eddie Brock/Venom?

Who in the ever loving f*ck decided it would be a good idea to cast ERIC FOREMAN as Venom ???”

It’s the only time I’ve really been pulled out of a movie because the casting didn’t seem right.”

Not because of the whole situation around it, but after reading the books and the cameos in Potter, I just don’t see him as Grindelwald, just as albino Depp.”

“Shia Leboeuf in The Crystal Skull.

That part should’ve been Short Round as an adult.”

“Why the f**k was Jessie Eisenberg cast as Lex Luthor of all f**king things?

All depictions of him are of a tall, bald, and lean businessman.

No disrespect for the actor, I’d take such a high paying job too, but whoever thought of casting him is a clown.”

“This might be less obvious but I hate Dwayne Johnson’s portrayal of Hercules.

He has the perfect body for it yes but it doesn’t mean he embodies the character.

I have the perfect body to play Lemony Snickett but doesn’t mean I should.”

“John Wayne as Genghis Khan in “The Conquerer” might be the worst casting in world history.

He doesn’t even try to hide his accent.

You keep expecting him to say “partner” every 15 seconds.”

Have you ever watched a movie and thought someone was totally wrong for a certain role?