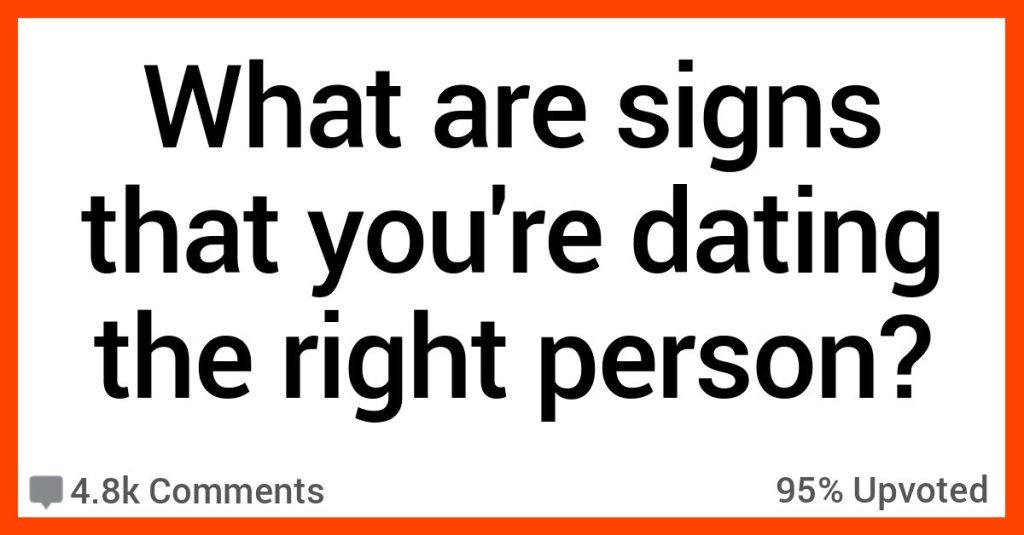 What Are Signs That You’re Dating the Right Person? Here’s What People Had to Say.

It’s pretty easy to get bitter about the dating scene.

But that doesn’t mean we need to be so grim about it all the time!

What are some GREEN flags early on in dating that the relationship should become serious? from AskReddit

Both people genuinely enjoying the conversation, being attentive to each other.

No negative attitude either

How good is their company during a drive, or when there is nothing to do?

My future wife and I found that we loved just spending time together. We could talk for hours in a car during a drive. Sometimes the drive was more interesting than where we were going.

A few weeks into our relationship, we went through a drive-through and she spontaneously unwrapped and rewrapped my burger so I could eat it while driving with clean hands. I knew I was going to marry her. Just over a week from now it will be 23 years!

When you can talk forever about pretty much anything, and when something you have different opinions about becomes an interesting discussion rather than a fight.

On my 2nd date, before I was supposed to move states, we got stuck in a parking garage cause of an accident for 45 minutes.

We watched a non subtitled foreign film on my phone, enjoyed talking with one another, and we connected despite being done with what we had planned to do and were stuck in a car.

I ended up canceling my move and marrying the woman.

The one that surprised me the most was being upset and telling my bf how I needed them to do XYZ (help me with chores, walk the dog every once in a while, etc) because I was overwhelmed and frustrated and he just responded “okay, I didn’t know you felt like that. I’ll try to do better but please remind me if I forget” and that was that.

It seems small and obvious, but holy crap I don’t think I had ever felt more heard.

Encouraging growth, but doesn’t try to change your foundation.

Do they respect your boundaries?

Do they apologize or acknowledge if they have done something wrong without making themselves the victim?

Noticing the other does not take themself too seriously.

In the very very early days of dating my now-husband, we took a long road trip for a romantic getaway in Boston. The first night in town, expensive dinner in a famous seafood restaurant. The server brings the bill and takes my date’s credit card. Server comes back with the news that the credit card was declined.

Both he and I burst out laughing at the same moment. That was my green flag!

When you feel completely at ease with them.

You feel you can totally be yourself.

Love is fireworks at first but if they come with a warm glow rather that edginess, that’s a good sign.

Being comfortable with time apart.

Early on in my relationship he went out of town with his family. When he arrived back in town he called me and thanked me for giving him space, but now he misses me and wants to come over.

Apparently, his last girlfriend had him on the phone day and night when he was out of town and he was shocked I didn’t call him at all. I was respecting his space!

We’ve been married five years now, and I still don’t bother him when he’s gone for a weekend.

He calls me every night before bed, but I don’t bug him because I want him to enjoy his time without worrying about me. It helps that I trust him.

Open communication about sex and feelings. Holding that stuff in for too long can lead to built up resentment, communication breakdown, confusion, depression… all sorts of issues down the road.

And being okay with raising concerns and issues – like if you find a person who can deal with that level-headedly, maybe even not agree but at least hear your piece without getting offended, you’re a winner.

I don’t believe in relationships where there are no conflicts or concerns ever. That just doesn’t happen. Relationships are bumpy and full of snags, and being able to navigate them together is so important.

My husband and I back country camped on our second date. He was a pro so I trusted him abs he says he was impressed at my willingness to be bold and do something adventurous.

We spent several hours hiking in to spot with only conversation and the woods. We set up camp and cooked together. The feeling was peace. Just at peace to be with each other, work as a team and comfortable with the quiet and fire. I knew he was the one that night.

I always thought love at first sight would be a powerful rush or energy. Turns out it feels like coming home.

When your soul feels at peace, that’s a green flag my friends.

My husband and I have endless conversations. There’s nothing we can’t talk about. Nothing. The first time we ever chatted on the phone we talked for 6 hours.

We’ve been together for 15 years and STILL talk every day, several times a day. We love our breakfast time because we chat after eating and really enjoy each other’s company. We love talking no matter where we are. And since he also works from home, we work together. There’s lots of times we’re saying nothing, just enjoying being around each other.

But I love that we can talk about anything we want and it doesn’t descend into an argument.

Being weird together after only a couple of dates.

It has taken me forever with most. But if I’m able to open up and be silly then I know it’s a really good sign as I’m an introvert and incredibly shy around someone new, especially someone I see as a partner.

Early in our dating days, I was on a train with my now-husband.

The inspector was checking our tickets while we were about to pull away from the station when my husband spotted a woman come running down the platform. He pointed this out to the inspector, who stuck his arm out the window and held the train until she got on.

My husband was so casual about it, didn’t think anything of it really, and it was a small action, but one that likely made her day better.

I thought it said a lot about his character, that he’d help out a stranger who didn’t even know it.

I was right, he is still that kind of guy!

About 4 months into my relationship I got injured. There was a chance that I wouldn’t be able to walk again.

My then girlfriend now wife said “don’t worry it’s going to be okay, we can figure this out either way.” I’m okay now, but just knowing she was going to stay with me no matter what was huge.

We’ve been together 8 years now. We have our challenges but at the end of the day we both know we’re there for each other.

In other words, how do they act/interact with you during times of stress?

You genuinely enjoy one another’s company during dull moments.

Life’s full of them and you are going to want a partner who you can enjoy them with.

The ability to apologize.

If your partner never sees their faults, it’ll never work.

Being able to make each other laugh.

Understanding the other person’s sense of humor is critical in long relationships, and besides, do you really want to get serious with someone who can’t hardly make you laugh or smile?

When, during an argument, both parties take time to listen and respond thoughtfully to their partner and show genuine concern for the distress in their partner, even if it is small.

You go on a road trip together and still like each other at the end of it.

If you can enjoy each other’s companies without needing a distraction you’re usually golden.

If the person is genuinely a busy person but will always find time to see you and spend time with you.

If you set a boundary and they respect it.

If you say that you are more comfortable meeting them at the date location after they offer you a ride they shouldn’t insist on picking you up.

Being able to sit in silence without it being weird or awkward. I.e one person reading a book or knitting or something, other person on the computer or phone or something, etc.

If you can be in each others space while doing your own things and not be bothered by what the other is doing or that their attention isn’t on you, and vice versa, I think that’s a sign that you can be together but independent. This isn’t limited to romantic relationships either.

On my first date with my future spouse, we had planned to spend some time together, then go get a bite and be done by evening.

When the date was supposed to end, i invited her for a walking tour of my campus.

When that was supposed to end, she invited me on a tour of hers.

When that was supposed to end, she asked if I’d ever walked a pretty nearby neighbourhood, and we walked there.

It was now about 11pm, i offered to walk her home. I went to walk home, she invited me in for tea.

We sat in her living room, sometimes in long stretches of blissfully relaxing silence just smiling, and i wasn’t on my way home until 2 am, 8 hours after the date was meant to have ended.

May we all be so lucky someday. 🙂

What would you add to this list of green flags?