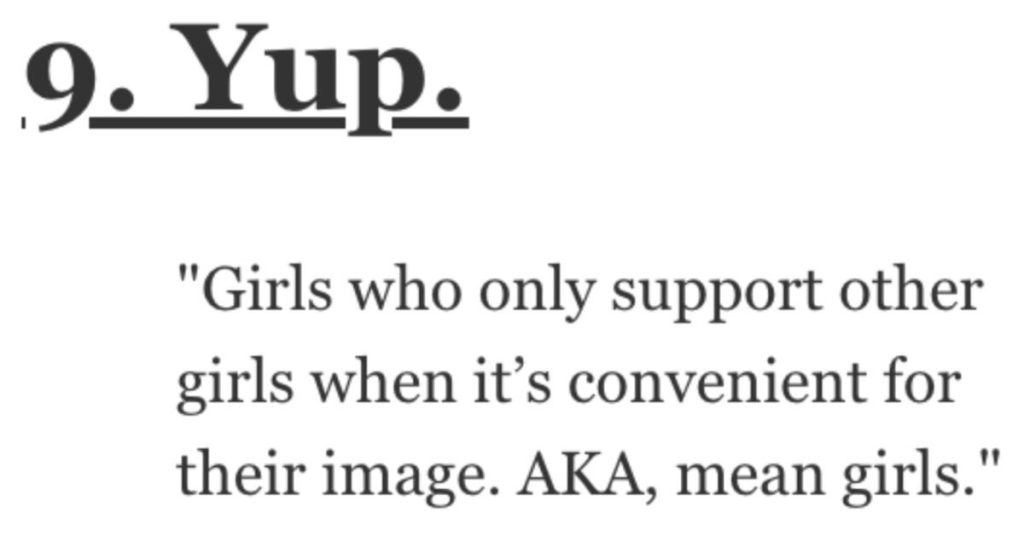 What Are Some Examples of Toxic Femininity? People Shared Their Thoughts.

Toxic masculinity seems to take up most of the airwaves, but the fact is that there is a flip side to that serious issue.

And today we’re going to hear from AskReddit users about examples of toxic femininity.

“Women talking trash on other women who can’t breastfeed.

My wife could not produce enough milk for our children. When our first was born she tried and tried. I woke up in the middle of the night to her crying. She felt like she was a horrible mom to even bring up formula.

There is so much pressure on moms, and it is incredibly stupid. Our kids are very well adjusted and were on formula the entire time. I tell anyone who is expecting their first that the only “right” way is the “right way for that child.” D**n everyone else’s opinions; do what is best for your family; not the mommy bloggers.”

“Not putting in romantic efforts in a relationship because they think only men should be romantic and pamper them.

“In my professional experience working in a field that is predominately female, I have observed that gossip and defamation can be pretty common among women.

At least in a professional setting, women (or people who identify as women) won’t confront you directly with an issue, but they will assassinate your character when gossiping to others.

You know it’s bad when normal volume turns to whispers and then the door closes. Yikes.”

I left a grad program for a female dominated profession, and the ludicrous nitpicking that women do to other women in it would have been hilarious if it weren’t actually happening.”

“S**t shaming other girls, policing other women’s bodies and hobbies, finding sensitive men weak, expecting to be provided for without any effort themselves, feeling that their being a woman means they are owed things in life like free drinks, expecting the man to always lead and pursue and getting angry if they don’t.”

“Shaming women for not having kids.

Shaming women for having too many kids.

Shaming in general for all of this stuff that’s personal choice.”

“Women putting other women down for their choices in both clothing and life style.

To bring up an example here: My mom was a stay at home mother and I had to see her get humiliated by working moms my whole life. There is nothing wrong with leading a life the way you deem it best and I know my mom worked hard to make sure I never missed out on anything.

It’s so hurtful to see women with other priorities call her lazy just because she put more working into something else. Or people assuming she is not educated because of her choice in career. The woman has a PhD and she never bragged about it once.

Toxic femininity is subtle but basically everywhere. I get put down for not wearing make up as a teen but doing it now or for suddenly wanting to work out to feel better in my body.

A lot of women somehow seem to feel that the way they were taught is the best/only way to lead life and that any woman that makes different decisions is automatically worth less than they are. You get pushed into a certain category in people’s heads and unless you perfectly fit into one, you get looked down upon and that is not okay.”

“Girls who only support other girls when it’s convenient for their image.

“Wanting to be treated equally only in certain situations, depending on who benefits most from it.

You can’t pick and choose like that. We should all be treated equally all the time, in every aspect.”

“Being a b**ch and pretending like it’s cool or acceptable just because you openly admit you’re a b**ch.

Maybe being “a bad b**ch” is just you being immature and grasping at social constructs to justify your immaturity and lack of growing potential.”

I’ve never heard so much s** talk or nastiness from male peers as I have female peers. Never once has a male peer discussed their significant other’s g**itals with or in my presence.

Female peers? I unfortunately know all about their male partners p**ises. Honest question: Is bragging about your male partner’s p**is size a status thing with women?”