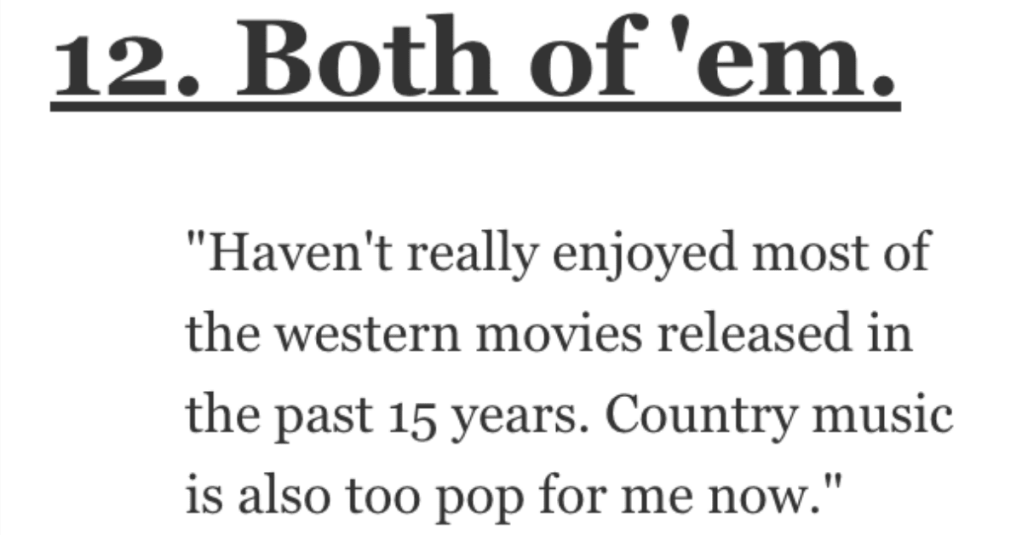 What Are We Not in the Golden Age Of? People Responded.

You hear a lot about “the golden age of” different things.

But I think we can all agree that we’re definitely not in the golden age of a whole lot of things at the moment.

People on AskReddit shared what they think we’re NOT in the golden age of.

Uneducated bloggers and twitter handles are given the same platform as qualified journalists, and it has pushed newspapers out because they’ve gone to paywalls in order to pay their staff to report on things properly. As a result, more and more people are saving money and getting information from free alternatives.

Most of these sources are biased, not fact-checked or both. It goes into the twittersphere and the next thing you know, everyone is repeating it but it’s got no underpinnings in truth. No sources cited, just rumors taken as fact.

Even the people working for more traditionally reputable sources can be prone to reporting rumors because they’re worried about being scooped, so they move too quickly and report what they hear before they have a chance to corroborate the information.”

My square, preppy, Ivy League grandpa hitched from New York to Alaska and back with his best friend in the 1930s, and it wasn’t even considered a strange or risky thing to do.

Half a century of classic rock and the station plays the same 20 songs every day.”

And they’re getting d**der by the day.”

That show ended 20 years ago, and you can’t convince me otherwise.”

I remarked when Eddie Van Halen d**d that we’ll probably never get another new rock band that achieves the fame or record sales of a Van Halen.

There’s good rock music out there, but it’s a fragmented market and as a result, very few rock bands have much cultural or economic impact.”

Like we only do WW2 and that’s because it’s a gurentee win. We h**e The N**is and that’s all we see is WW2 films where we just k**l BBG which is just THE N**IS.

Globally there’s been thousands if not millions of wars that have more interesting aspects and stories than WW2 and WW1.

Like without googling I ask “When’s the last time you seen a movie about The Korean war that isn’t MASH, Spanish American War? Russio Japanese war? Heck Vietnam and it isn’t We were Soldiers, Apocalypse Now, or Good Morning Vietnam?”

Chances are you’ll be on your phone getting ready to tell me immediately googling up 3 McWar films.

I think there’s some movies that deserve attention like The Siege of Jadotville and 1911.”

I will justify my answer a bit though with details of a recent trip flying to Caribbean from a Midwest US city. For context, I’m 6’5”. Want 2” extra legroom? Pay extra. Want to sit next to your spouse, well pay extra for them too (x8 flight legs, pay to pick seats for each). Want to bring luggage? Extra. Is it heavy? Extra.

Oh sorry, they changed out planes you’re not getting the seat you paid for. Want to maybe get to wait in a shorter security line? Extra. That tsa approved checkpoint friendly bag you bought? This particular agent says you still have to take out your laptop. Get there at least three hours early for international flight, it may not be enough or it might mean you sit in the terminal for an hour and a half.

Want a cup of coffee in the airport? Line is 40 people deep. Airport food is like stadium food in cost and quality but you can’t bring anything with you. Going through customs during covid? There are three agents working and 1000 people in line, holy s**t.”

Back in the day this was a real deal mode of transportation.”

“In my opinion the golden age of Youtube was when “viral videos” were still a thing and creators were a lot smaller and more amateur.

This was the original spirit of YouTube and it’s totally d**d now.”

And if you disagree, I’ll insult your mother.”

“Haven’t really enjoyed most of the western movies released in the past 15 years.

Country music is also too pop for me now.”

Too many people interact behind screens for people to really consider one another as human beings. It’s easy to disconnect and dismiss the person reading your words has a life, a family, and their own whole history.

It’s even easier to not care how your words might make someone feel.”

The mid to late 90’s, when we weren’t all connected all the time, when people made personal websites from scratch, not templates, and animated gifs were the coolest things.

It was so magical and promising.”

“Science fiction. Look at the Nebula awards best novel nominees and winners in the late 60s.

1969 The Left Hand Of Darkness by Ursula LeGuin

Rites of passage is only OK – it would be marketed as YA in today’s market – but the other three are classics.

Novels nominated but not winning in those years include Flowers For Algernon, Do Androids Dream Of Electric Sheep, Stand On Zanzibar, Lord Of Light, Thorns, Bug Jack Barron and Slaughterhouse-five. Oh, and the winner before this period, in 1965, was Dune.

Look at the winners in the last five years – they’re not actually bad but they’re safe and tame and unambitious compared to their counterparts from 50 years earlier.”

“In the US, personal travel via the car.

We have our transportation system built around the automobile, but they are dirty, noisy, expensive and dangerous. As roads become more and more crowded, they are becoming less efficient.

But since there’s really no other way to get around, they are necessary evils.”

“Amazon. Look how Bezos is ruining the company.

Lots of anti-consumer policies going about. Can’t fix a phone by taking it to a local shop because Apple/Samsung don’t make the parts readily available like the automotive industry used to. Even the auto industry is creeping to where you can’t just take it to small business, and instead have to bring your car to the company/dealer.

With phones, it’s essentially if you replace the battery, the camera could stop working because it’s not “a genuine Apple/Samsung part”. They do this so small business doesn’t get the money, only the manufacturer does.”

There’s a few good artists many of whom are underrated af but nobody compares to the legends from the 80s and 90s.”

“Minding our own businesses.

Why is everybody so interested in everything about everybody?”

It’s being a**aulted nearly everywhere and electorates are apathetic and under-educated/ill-informed, which further weakens democracy.

We’ll see things swing back eventually, but there are going to be plenty of interesting times ahead before they do.”

Sorry but, like 90% of people will blame everything on someone else and look for help even when they don’t need it. People want everything handed to them without any effort needed or put it to earn it.

People expect that by demanding things they deserve to get them. We as a society support this constantly thus this entitled generation, became a thing.

College cost to much, don’t go to a community college, or learn a trade, just wrack up debt then stay at home and make their parents pay for it and them. Then call it societies problem.”

What do you think we’re definitely NOT in the golden age of?