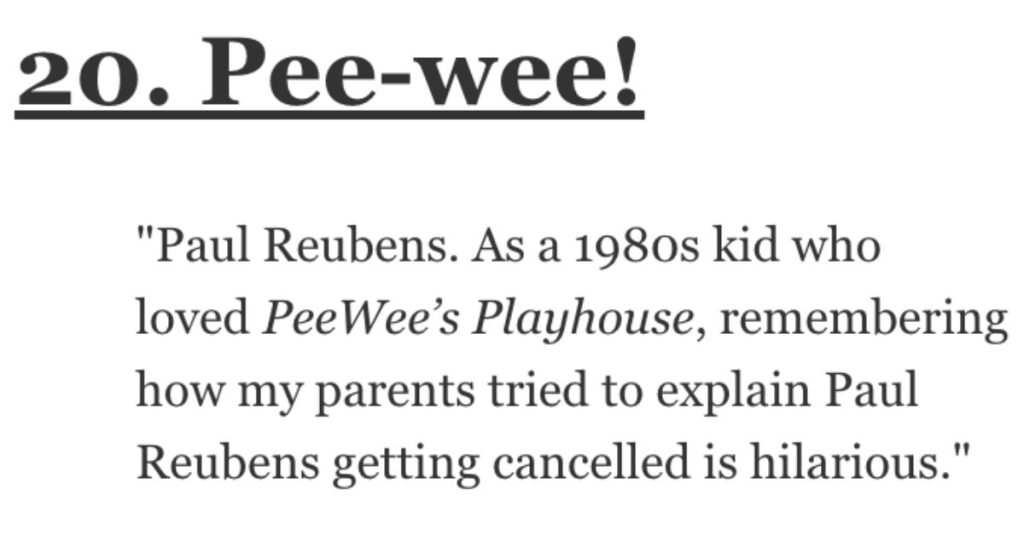 What Cancelled Celebrity Do You Feel Bad For? Let’s See What People Said.

Famous people are getting cancelled left and right these days, huh?

Actors, musicians, politicians, no one is safe.

And I’m sure that you know that a ton of them did really horrible things and they deserved to be called out for them.

But did some of them just get caught up in all the “cancel” hoopla?

AskReddit users talked about what cancelled celebrities they actually feel bad for.

He was the first who told everyone what was really going on with child actors in Hollywood and no one listened.

Barbara Walters yelled at him for exposing it.”

As a 1980s kid who loved PeeWee’s Playhouse, remembering how my parents tried to explain Paul Reubens getting cancelled is hilarious.

My dad told me “he took off his clothes in a movie theater” and kid me was like “wow that’s really weird but I guess he is kind of crazy?””

That feels like one of the first big “cancels” of the Internet age.

Glad she was able to rebound with Stranger Things.”

He yelled in excitement at one of his political rallies in 2004.

People thought he was wasn’t fit to be president because of it.”

“Kind of a unique case but, Laura Dern.

When Laura Dern played Ellen’s girlfriend on the episode where she came out, she was blacklisted by the industry for nearly a decade. And some people would harass her to the point she needed protection in public.

She says her manager warned her she wouldn’t get roles if she agreed to take the part on Ellen but did so anyways. She went from Jurassic Park and being in demand to nobody giving her a call.

Obviously she’s recovered but we lost a decade of great Laura Dern performances because of studios perception that she was cancelled by public opinion for playing a gay role.”

“Not completely gone, but Terry Crews has issues getting work because he spoke out about being s*xually assaulted during the #MeToo movement.

People assumed a man his stature couldn’t be assaulted and he gave names and people weren’t very happy.”

From what I’ve seen she was abused by Dan Schneider at Nickelodeon Studios for YEARS.

And a lot like Britney, is currently under conservatorship because of a total mental breakdown.”

The man was groped by Hollywood exec Philip Berk and spoke out about it long before #metoo.

They instantly cancelled him and we never got to see him again till only recently… His mom also passed away shortly after he got s*xually assaulted.”

“Duvall was in a string of great Robert Altman films in the 1970s, and did her own string of Cable shows in the 1980s, Shelley Duvall’s Faere Tale Theatre, Tall Tales and Legends, and Bedtime stories.

Also, she did a few musical albums, and even created some computer games in the 1990s, like A Bird’s Life and A Dog’s life. There is WAY more to her then Wendy Torrane in the Shining.

Now, she is completly forgotten, except when people call her crazy or something. She deserves WAY better in my opinion.”

She didn’t even get “cancelled”, she just had her reputation smeared all over primetime tv and THEN the courts decide that her reaction to being systematically erased from relevance was “crazy”.”

He should have been Australia’s greatest athlete, but he supported the black power salute and got black listed by the Australian Olympic Committee.”

There’s a really good documentary called “You Cannot Kill David Arquette” about what happened and how he is now.”

Mira Sorvino, too. She went from one of the most in-demand actresses after winning her Oscar, to being completely blacklisted because Weinstein was telling anyone who’d listen that she was a diva and impossible to work with.”

“Brendan Fraser got blacklisted after being molested by a higher up in the movie industry. His wife divorced him, taking his money too.

After all the joy that man has brought us, he got the short sh*t covered side of the stick.”

He had a reputation of being kind of a stuck up asshole when the PeeWee character shot to fame, but not really any better or worse than other famous folks. He got “cancelled” because he was arrested for public indecency.

He’s made a bit of a comeback recently though. I think people finally realized that in the grand scheme of “s*x crimes”, jerking it by yourself in a p*rn theater is nothing at all.

I saw his PeeWee revival on Broadway several years ago and enjoyed it, and I’ve seen him on a lot of the celebrity game shows on TV recently.”

“Britney Spears when she shaved her head and all that.

I’m no fan of hers but she just seemed like someone who cracked under all the pressure and lost her sh*t. Craig Ferguson did an absolutely amazing job talking about that and relating it to his own life.

Major respect to him for that.”

“The Dixie Chicks got their career ended and death threats for saying they didn’t support the war in Iraq.”

She called out Michael Bay on his s*xist sh*t that’s clear in all his movies but what really got her “cancelled” was that she called him a Nazi.”

I was a kid when it happened so I had no awareness of it but I don’t get how everyone blamed her.

Is there any reason she was at fault instead of Justin Timberlake other than s*xism?”

“I’d have to say Sinead O’Connor.

She was absolutely trashed by the media. Written off as a complete nutcase and ruthlessly mocked. All because a bunch of pearl-clutching fools refused to believe the increasingly obvious realities of the Church and decided that the Pope was above criticism.

She was entirely vindicated in the subsequent years (actually, the truth was far worse than even the Church’s worst critics could have imagined), but the legacy of that witch-hunt lives on.

Did SNL, Frank Sinatra, or any of the other f*ckers who were involved ever apologize to her?”

But obviously fan outrage over that managed to make Disney realize how stupid their decision was.”

Bill Cosby put a scarlet letter on her after the movie Angel Heart. The convicted rapist thought she “sullied” the image of “The Cosby Show” and “A Different World” and this affected her career going forward.

Not saying she was an Oscar contender, but I remember being upset about how mysogynistic the whole thing was”

23. Don’t hear much from him anymore.

He was both my Senator and my favorite politician.

He would have made a great president.”

He was having a frank and honest conversation about his past feelings and emotions around a sensitive topic from his past.

In the interview he is clear that he knows what he said and felt is wrong yet what’s the point in trying to justify it when the sound bite has already been provided.”

I don’t feel bad he got cancelled. I just felt bad when he tried to apologise on Letterman and the audience was laughing and thinking it was a joke just because it was “Kramer”.

Seinfeld was a good friend and he told the audience this wasn’t a laughing matter.”

“Aziz Ansari definitely didn’t deserve the public shaming he received for what amounted to an awkward, bad date.”

Do you think there are some celebrities who got unfairly cancelled?