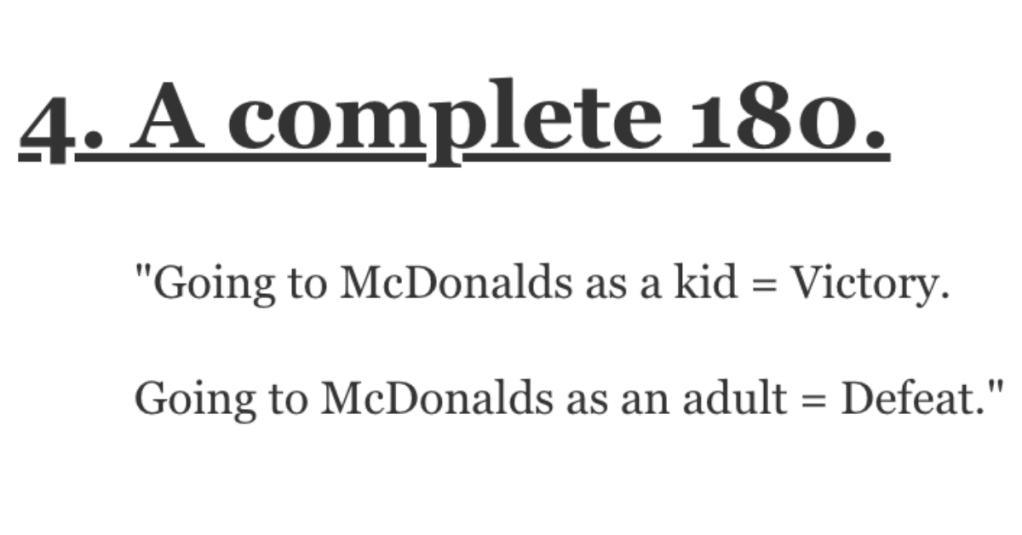 What Did You Love as a Kid but Can’t Stand as an Adult? People Responded.

Our tastes change over time and that’s a good thing.

I’m relieved to believe that one day, my children will voluntarily eat something that’s not macaroni and cheese, chicken nuggets, or pizza for one thing, but for another, experience should teach us a thing or two, don’t you think?

If you want to ponder how and when our tastes change over the course of our lives, these people are recalling things they just loved as a kid that now they cannot stand.

not depressed or anything but life was so much better and beautiful as a kid.

I was lucky had an amazing family everything was perfect and then overnight bills come in, responsibilities, stress, problems …. stay young as long as possible, growing up it is a trapp

Ah the bliss of childhood. They say “The more you know, the more you wish you didn’t.” Idk who said that but it wasn’t me

Those chocolate coins in the gold wrappers.

I still love them, a nice treat now and again, can only have 2 or so now that I’m older though, a bit sweet and weird, but I still like them.

Going to McDonalds as a kid = Victory.

Going to McDonalds as an adult = Defeat.

I’m just so tired of everything – social expectations, maintaining relationships, working a job, never having enough time to do the things I enjoy but then being paralyzed by choice when I do have free time, obligations around the house, and dealing with other people in general.

I have grown weary of this world.

6. The neighborhood has really gone downhill.

Used to be great for meeting up with friends or girls from other colleges.

7. Because no one takes care of you. Boo.

Staying home on a sick day.

As a kid it was a huge victory, got to stay in bed all day, watch TV, and having a parent tend to your every need.

Then as an adult you’re just thinking about the work you’re gonna have to make up for and how you hope you don’t need to go to a doctor.

8. That is not cheese. #sorrynotsorry

9. A cold waiting to happen.

When I was a kid I’d pick a buffet to go to for my birthday.

As an adult I realize how low quality and gross the food is.

I still want to eat sugary stuff like pastries, except now I feel guilt every time I eat it.

“The more I learn about people, the more I like my dog.” – Twain

It used to be all exciting gift cards, presents, cool magazine subscriptions and nice letters from family members and friends.

And for the same reason: Candy corn

That stuff used to be crack to little me.

I tried it as an adult and it was so sweet it practically burned.

14. So many things not actually delicious.

Got so excited to try again and realized quickly I liked it better as a kid.

When I was a kid it meant staying home from school and watching price is right in the AM and TRL all afternoon.

As an adult it means no paycheck and Shame

As a kid it was exciting cos it would only happen around Christmas and my birthday but now it’s just bills.

Spinning. As a kid I would basically t-pose and spin in place for fun. I’d get dizzy for a few seconds and then I’d be back to normal.

Now, if I did that, I’d feel nauseous for the rest of the day, would probably have to lie down for a few hours.

18. It’s still better than the alternative.

Growing up. Couldn’t wait to grow up when I was a kid, but dread getting older now.

One year into adulthood and all I can think of is f*ck go back.

When I was a kid teenagers were so cool. Now they’re the most obnoxious people in the world.

The thought of having a job.

Man, makes me so depressed.

Before I thought it would be fun and cool to have money. Now I’ve gone a year deep and when my supervisor goes to cry in his car over the stress of the job I honestly relate.

Spending the night at someone else’s house.

I looove sleeping in my own bed and using my own pillows.

Sucks when you wake up before anyone else and you just stare at the ceiling until the rest wakes up too.

22. This is truly a sad state of affairs.

Carnival rides. Used to love em as a kid. Now I can’t get on the tilt-a-whirl without getting super sick.

Man, I used to LOVE the Scrambler at fairs – Went on one a few years ago, and my fn neck just hurt for days lol. G-forces tryna yank my lollipop head right off!

Kind of a depressing “I’m-getting-old” moment for me

Yoplait whipped keylime yogurt. It was the only yogurt I would eat and I ate a lot of it. Now thinking about the taste makes me sick.

25. I miss my old digestive tract.

Fast food. Used to love it because my parents only allowed me to have it when we were on vacation so it was like a treat for me. As an adult their home cooked food is the treat now.

26. Sometimes you just know too much.

I never understood why people sh%t in the pool. If it’s a young kid I understand, but some of the s**ts are bear size.

27. When you had everything in common.

Making new friends, so much easier when you are still a kid.

Also, sustaining friendships when all your friends are married, have kids, in Serious relationships, demanding careers/jobs, or are simply too busy. Seems everybody is so busy we start to forget to connect, even if it’s just for a cup of coffee, hell, I gotta ask people at least a week ahead of time to hang out, sometimes more.

I also miss the days of hanging out on a whim, like when I was in my teenager/early 20’s.

Honestly as a kid I was so judgmental of all the moms who’d bring their kids to the pool and wear bathing suits but never get in.

29. This new generation will never talk on the phone.

Talking on the phone. Used to stay on the phone for hours at a time three-way calling with friends. Now the idea of my phone ringing makes me want to puke.

Emails. I was in college when I got an email address – was super excited to get an email.

Now, I h**e getting them because it’s either a stupid meeting or something I have to do/address at work.

I think I could make a pretty long list here that is nothing but food!

What’s something you couldn’t imagine hating when you were younger? Dish in the comments!